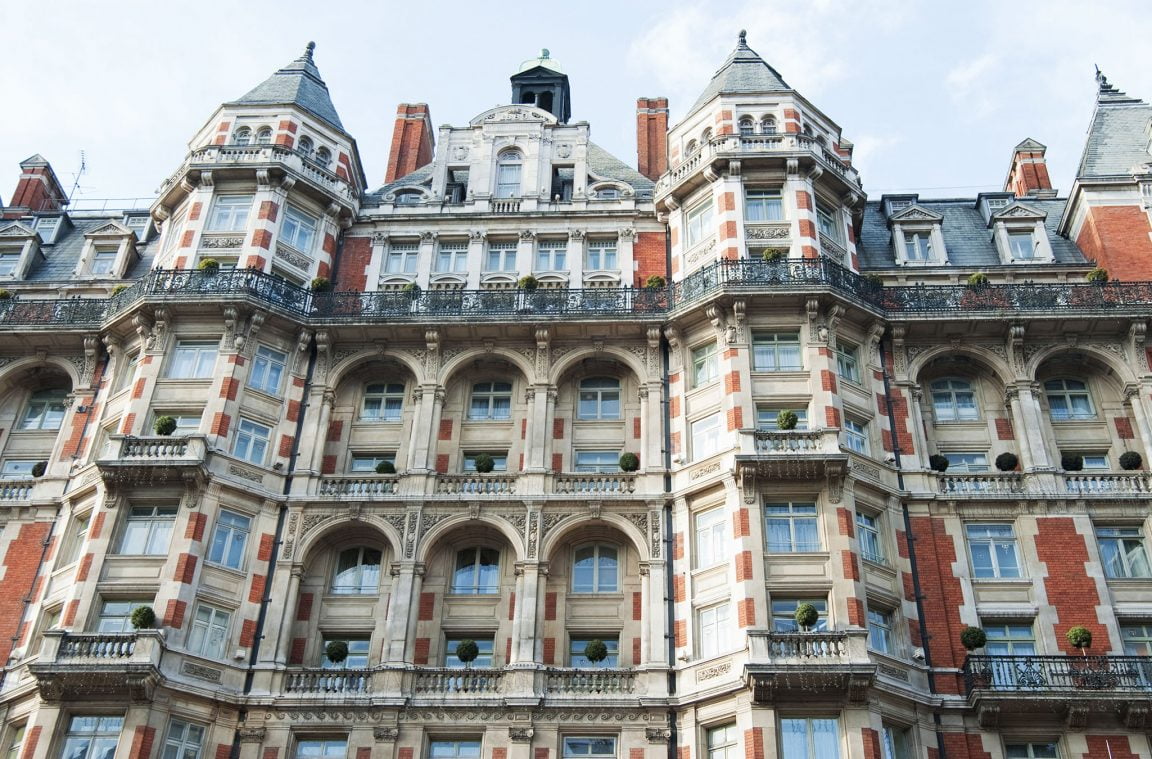 In a city like London There are many five-star hotels where you can sleep. Among these, there are some that stand out for their luxury, their exclusive services and their original facilities. In this article we show you 15 of the most impressive and recommended ordered from least to most relevant. What is the most luxurious hotel in London?

The Soho Hotel, of the company Firmdale Hotels, is located on Richmond Mews street, a few meters from Oxford Street. This area is characterized by its offer of bars and restaurants, as well as by the great theaters.

This five-star hotel has 91 rooms, each with an individual style. Has suites up to three quarters. 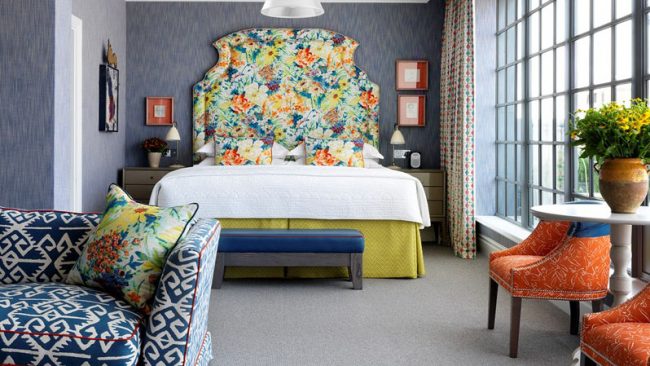 The special design of the rooms at The Soho Hotel

Among its facilities, the two movie theaters stand out, which can hold an audience of 100 and 45 people respectively. It also has its own gym and spa, called Soholism.

Every Sunday a different movie is played, which can be seen while enjoying a succulent three-course meal.

El ME London is the five-star proposal of the Spanish company Melia Hotels International. It is located on The Strand near Covent Garden, Trafalgar Square and Big Ben.

Has a modern design and cosmopolitan, adjectives that also characterize the city of London itself. It was designed by renowned architects Foster and Partners.

It has a total of 157 rooms and 16 suites, and some of them have stunning views of the River Thames. In addition, in the attic you will find a bar with a terrace. 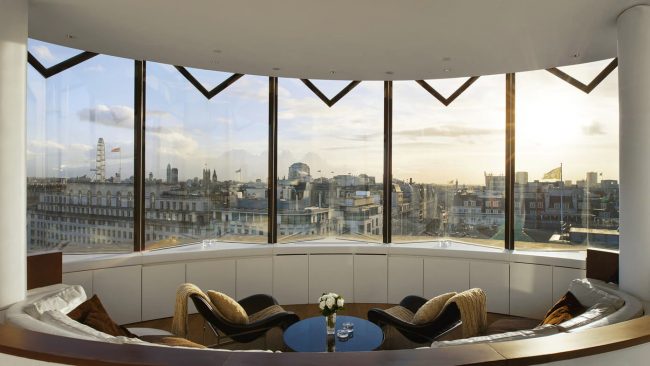 The breathtaking views from the ME London hotel

Depending on the room you choose, in the hotel Mandarin Oriental Hyde Park you can enjoy three different views: a Knightsbridge, the Hyde Park or to a quiet internal courtyard.

If you are on a business trip and need to rest, the most recommended are the rooms that face the interior courtyard of the hotel.

This hotel has a total of 141 rooms and 40 suitesAs well as two different restaurants and a bar. Likewise, you can exercise in its gym, or relax in its spa and heated pool. 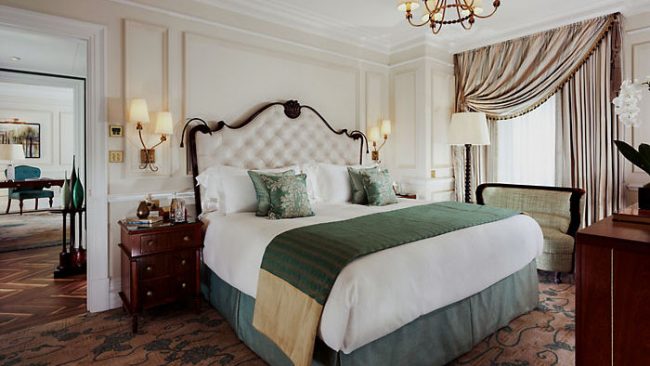 Among the different benefits that it offers, there are some especially focused on people traveling with children, such as babysitting services.

El hotel The Lanesborough boasts a private spa that only its members can access. The luxury of this one is such that it even has its own restaurant.

On the other hand, you can try the tasty dishes of Céleste, which has a Michelin star. In its facilities there is also The Garden Room, where there is an exclusive offer of Havana cigars.

Children staying at this hotel receive a gift upon arrival, they are assigned a Butler who cares about their care and they have a special room. Also, you can go with them to Hyde Park or Buckingham PalaceWell, they are close. 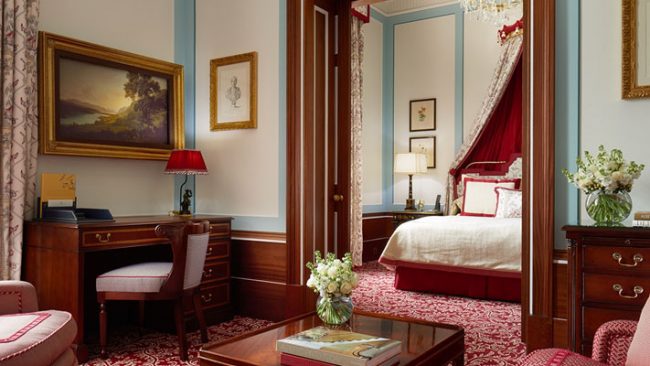 The luxurious rooms of The Lanesborough hotel in London 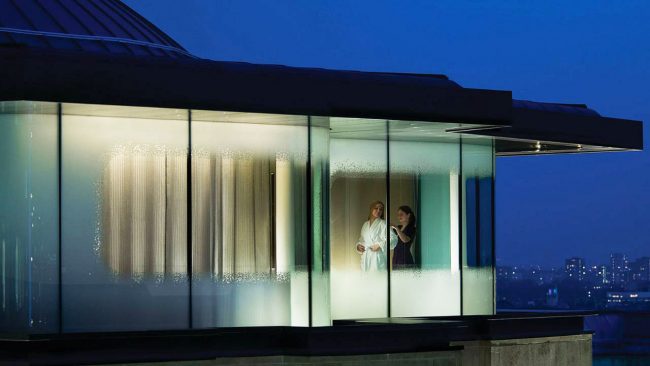 To eat inside the hotel, you can go to Amaranto, which has three different areas: a restaurant with an Italian-inspired menu, a bar and a lounge.

Among the facilities that its employees provide to guests, is the Albemarle Theater Desk, from where you can buy tickets for the most important shows in the city.

This accommodation has an interesting history, as it is said that in its room called Palm court the widespread English tradition of drink the tea mid afternoon.

In addition to this option, nowadays you can also eat at their restaurant or have a drink at the bar. Likewise, the hotel The Langham London, has a center fitness and beauty.

On the other hand, its location is ideal, since it is in the area West EndNear Regent Street y Oxford Street. In addition, it is a short walk from the British Museum. 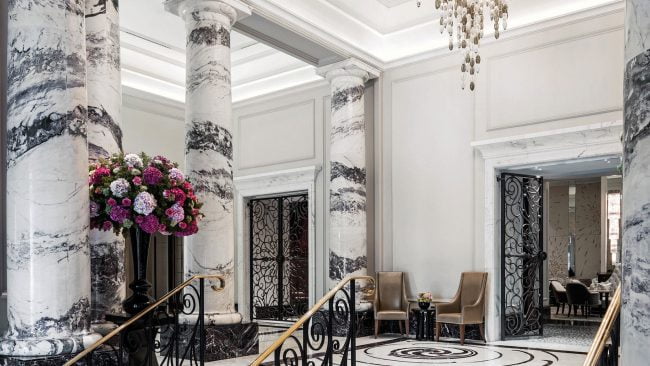 Lobby of The Langham Hotel, London

9. The May Fair Hotel

The may fair hotel It is one of those establishments chosen by the most notable people on the international scene, since in it you can reserve an entire wing to organize a party in style. You can choose between one of the first seven floors and you have the option of hiring private security.

Also, among its various luxury rooms, the largest is the Pent House Suite, which has nothing less than Sqm 199, which makes it a real apartment.

Furthermore, the hotel has a private cinema that can seat up to 201 people, perfect for large events or movie premieres. Nor does it lack a gym and a spa. 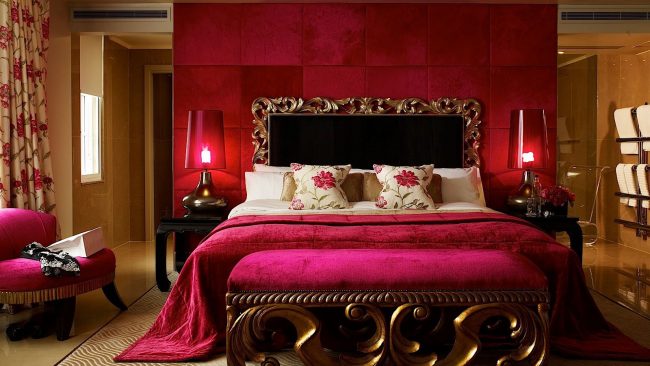 Room of the luxurious 'May Fair Hotel'

The Savoy, of the Fairmont chain, is located on the north bank of the Thames. It offers 267 rooms and suites from which to enjoy impressive views.

While suites with butler service, all guests can use the spa, private pool and gym, which is open 24 hours a day. 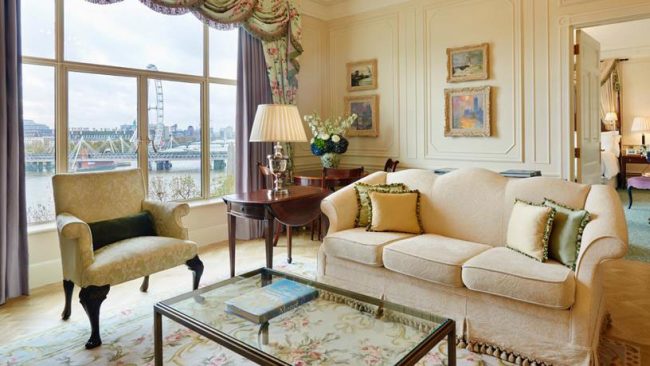 You can also choose between seven establishments different in which to eat or have a soft drink:

Among the stars who have been lucky enough to stay here are Frank Sinatra, Katharine Hepburn and the French painter Claude Monet.

This 5-star luxury hotel is on the UK's list of Buildings of Special Architectural or Historical Interest, so its location is important and has great value.

The Milestone Hotel, Red Carnation Hotels, is less than 500 meters from the Kensington Palace, the royal residence where Princess Diana of Wales lived.

In addition to the rooms, which have a unique design, you can stay in one of the six apartments ranging between 750 and 1.000 square meters, perfect for long stays or with the family. 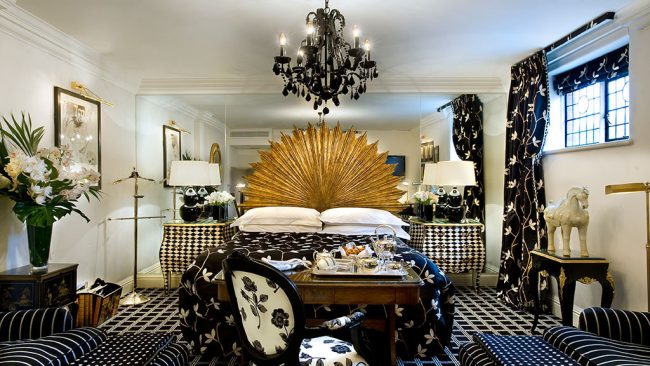 Arlequin Suite, at The Milestone Hotel

Pets are welcome at this hotel and are given a gift basket. Similarly, there is an offer of special menus for them and you can hire the tour service.

6. Shangri-La Hotel, At the Shard, London

El Shangri-La Hotel It is located on the 34 to 52 floors of the grandiose building The Shard, designed by the architect Renzo Piano. It has 202 rooms, 17 of them suites, among which are the Signature Suites, whose names are the following:

On the 35th floor you can enjoy the TENG Restaurant, while in 52 we not only find a bar, but you will also find a gym and a swimming pool with incredible views. 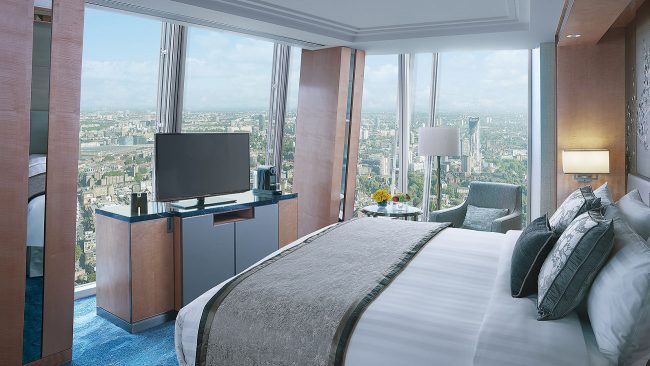 The dizzying views of the Shangri-La Hotel in London

This impressive five-star hotel is on Whitehall Place, a few meters from Trafalgar Square. Although the rooms leave nothing to be desired, the apartments are unique.

Among these stands out The Musician's Penthouse, which has two floors and 230 square meters. In it, you will find a piano, among other music instruments, making it a recommended option for music lovers. 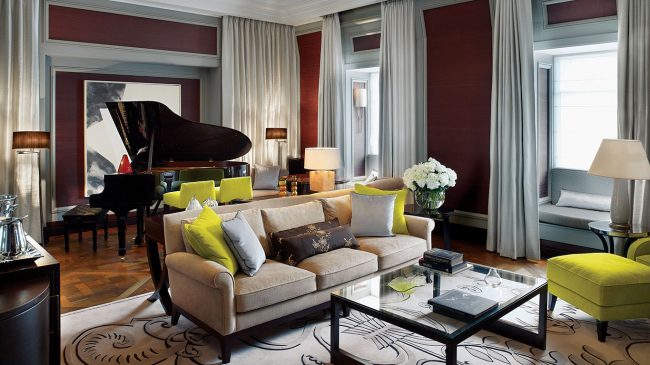 But it is not the greatest as it beats you The Royal Penthouse, with 465 square meters. Each of the seven models of penthouse It is themed and has a unique decoration.

Within The Royal Penthouse there is a terrace of 63 square meters, as well as an internal elevator.

Regarding the services offered by the Corinthia Hotel London, we find the hairdressing salon and the fitness. There are different spa treatments, some specialized for pregnant women.

El hotel Taj 51 Buckingham Gate It is so exclusive that it does not have normal rooms, it only offers suites luxury, as well as residences of up to six bedrooms.

Similarly, it has three restaurants and one of them, Quilon, has been awarded a Michelin star. In the Kona room you can request a special afternoon tea: set in Alice in Wonderland o The book of the jungle.

If you want to try one of these original teas, you must book in advance. In addition, if it is for more than four people, a deposit of 50% of the total price is paid. 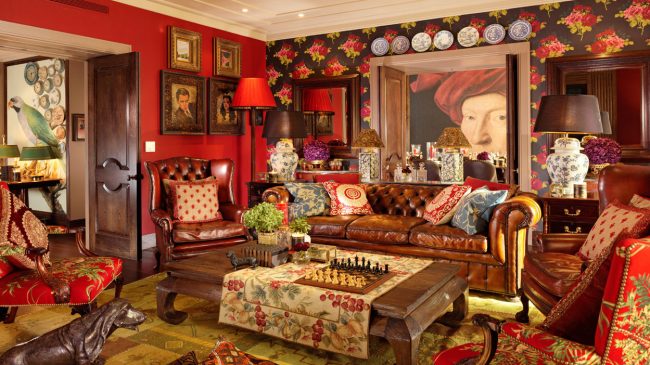 You can also try the Drop Scones or pancakes that follow the recipe that Queen isabel II sent in 1960 to the American president Dwight D. Eisenhower. These menus are served between 12.30pm and 17.30pm.

El Hotel 41, Red Carnation Hotels, impresses with its opulence and ostentation. It is located in Westminster on the Buckingham Palace Road.

This accommodation boasts of treating you in a unique way, as it offers you a glass of champagne upon arrival and you have a wide range of snacks and drinks throughout the day. 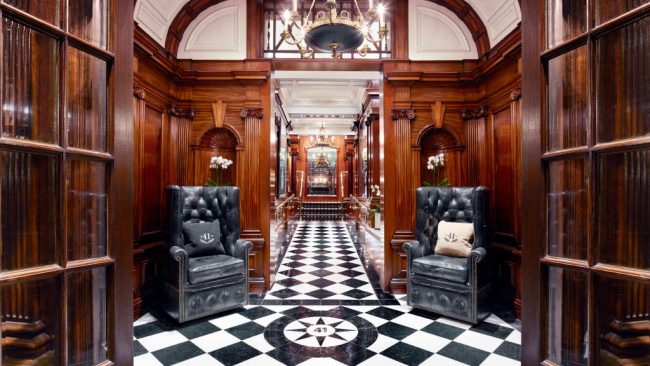 The luxury and elegance of Hotel 41 in London

Among its 30 rooms, the Conservatory Master Suite, which has a glass ceiling, allowing you to see the stars. In addition, it has views of The Royal Mews, the royal stables.

Near Covent Garden, specifically at 252 High Holborn Street, we find the hotel Rosewood London in an impressive building that began construction in 1912.

Its entrance already amazes its visitors, as it is accessed through an interior patio. Among the different services that we can find, there is the butler and the valet parking. 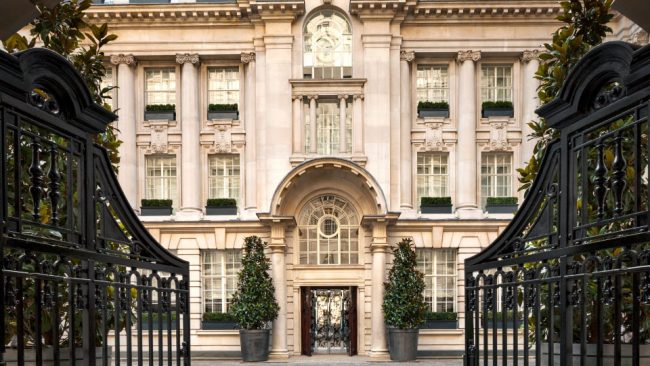 The Rosewood London hotel and its imposing entrance

This hotel can accommodate a large number of people simultaneously, as it has 262 rooms and 44 suites, which are designed by the company Tony Chi & Associates.

In addition to the rooms, which are cleaned twice a day, you can enjoy the Sense Spa, the exercise room and the business center, among other facilities.

The Ritz company is known around the world for its impressive hotels. It was in London where he opened his first accommodation, specifically in 1906 on busy Piccadilly Street, in zone 1 of London. It may sound familiar to you, since it is one of the movie sets Notting Hill and, for many people, the most luxurious hotel in town. 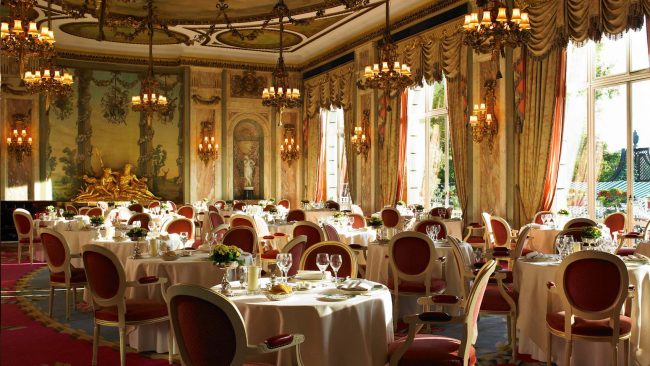 The grandiose lounge of the Ritz Restaurant in London

Inside we find the Ritz Restaurant, awarded a estrella Michelin and whose living room is one of the most beautiful in the world. In addition, music and dance shows are organized on Friday and Saturday nights.

This company has its own jewelry and watches firm, Ritz Fine Jewelery, in which precious stones are not lacking. Likewise, it also has a prestigious club in which not everyone is a member.

If you can't afford to spend a night in The Ritz LondonYou can go for afternoon tea, which starts at £ 54, £ 30 for children.

Share 65
We use our own and third-party cookies that offer us statistical data and your browsing habits; with this we improve our content, we can even show advertising related to your preferences. If you want to disable these cookies, press the Configure button. To keep all these cookies active, press the Accept button. More information in the Cookies Policy of our website.
Setting
Accept and Continue
Manage consents