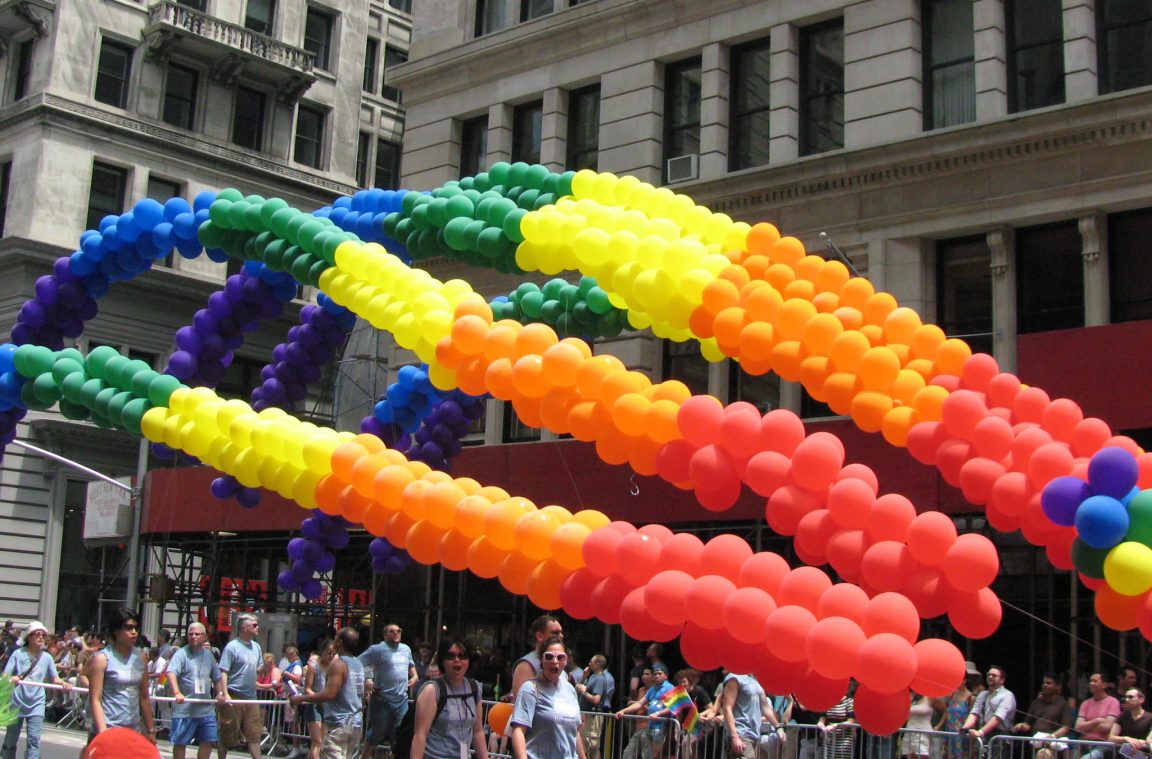 The celebration of gay pride in Spain is booming, with parades of Madrid, Barcelona, Sevilla and Valencia among the most popular. This event attracts both locals and tourists thanks to the marches that take place in its streets.

El Madrid Pride or WorldPride Madrid It is the best known in Spain. Activities take place here for about a week, between the end of June and the beginning of July.

The center of this festival is the well-known Chueca neighborhood, as well as the main streets of the city, where performances, concerts and activities of various kinds are organized. The most important activity is State demonstration, which is considered the largest in Europe.

The most innovative thing about Madrid Pride is the Ideas Laboratory, in which through its website it allows anyone to send proposals and suggestions for the next editions. 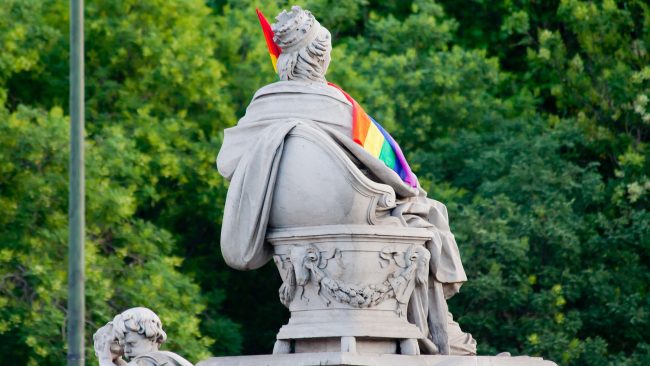 Cibeles with the gay pride flag

In Valencia it is also celebrated around the official date, June 28, with a large number of activities taking place the weeks before the day.

The most important activity is the Manifestation of LGBT pride, a parade that starts from the Parterre, a historic garden located in the center of the city. In addition, since 2016, a music festival has been held, the Pride Festival València. 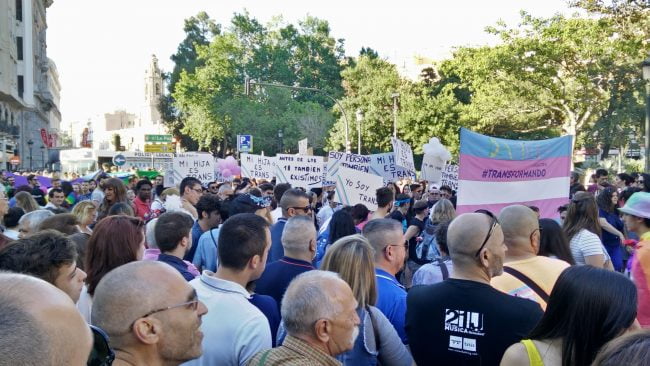 The cinema also has a place in this celebration, since the Show the Ploma, a festival in which you can see LGBT-themed short films and documentaries.

Gay pride in Sevilla It is celebrated on a day around June 28. You can see different shows and recitals around the city that are offered free of charge. 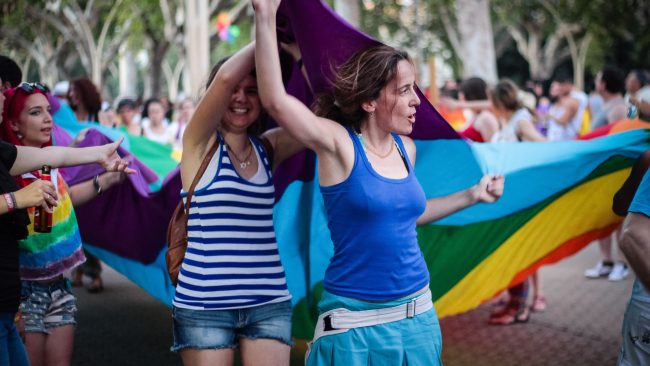 The parade, called cavalcade, takes a long tour through the center of Sevilla, culminating in the Alameda, where the reading of the Manifesto takes place. To close the day there is a great party.

El Pride Barcelona It is celebrated between the end of June and the beginning of July and lasts for two days, generally Friday and Saturday. 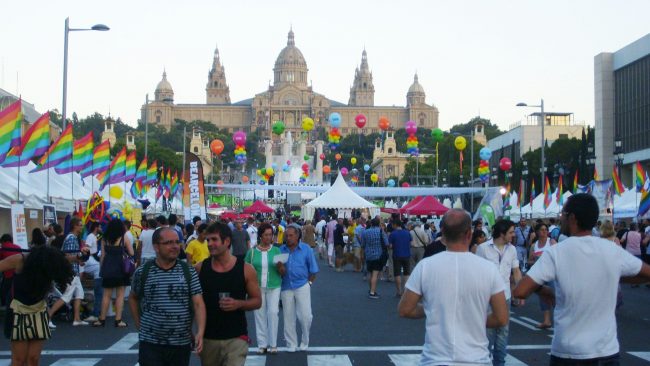 The main activities are usually carried out at the Pier (Moll de la Fusta), in the port. Their parade, the Pride Parade, takes place between Plaza España and Moll de la Fusta.

One of its funniest activities is The Heel Race, in which participants have to run with heels at least three inches high.

In this Barcelona town, gay pride also has a great five-day celebration, usually in June.

Its nerve center is the Gay Pride Village, focus of the music festival and the main activities. It stretches along the beach and has a large stage, bars and food stands.

In addition, a parade is also held, which boasts more than 60.000 attendees. It differs from the rest of the pride parades in that all attendees participate in it, there are no spectators. 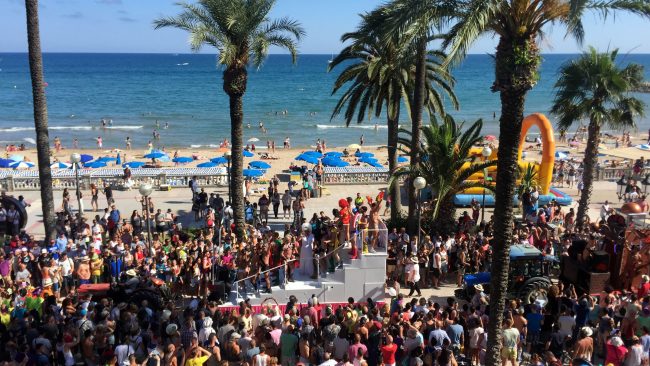 La Diversity Festival Alicante is celebrated for nine days, once again between the end of June and the beginning of July. Its programming combines both cultural events and festivals.

Its most important part and final touch is the Manifestation, which begins in the Plaza de los Luceros and ends in the Plaza del Ayuntamiento with the so-called rainbow party. 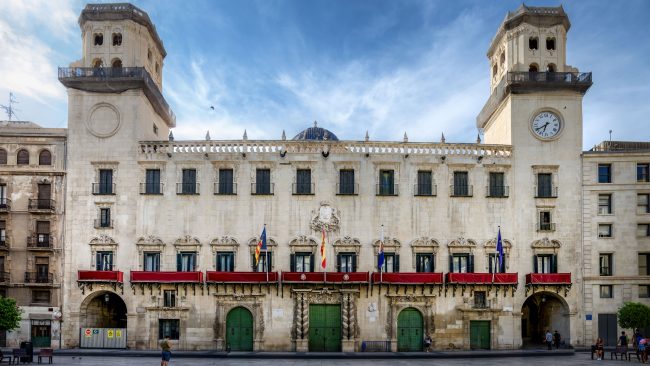 Other activities carried out are the screening of LGBT-themed short films and films, workshops and round tables, and parties with performances, animation and go-go.

Benidorm gay pride takes place at the beginning of September and lasts a whole week. This festival is concentrated both in its old town and in its different beaches.

His best known act is the Pride Parade o Benidorm Pride Parade, which runs along the Paseo de la Playa del Levante. Theme parties are also organized in the premises of the Old Town, gastronomic routes and performances by local and international artists. 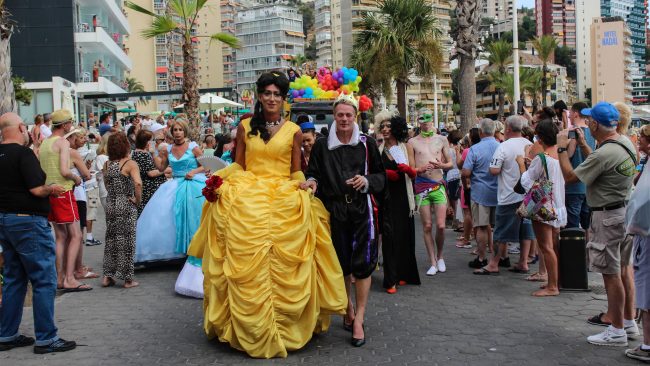 All events are organized by the local association ALGTB (Lesbian, Gay, Transsexual and Bisexual Association) and by the friendly bars of Benidorm.

At the end of June and for four days this city fills with color with its Bilbao Pride.

It has a large stage located on the Marzana dock, where concerts and performances take place. The rest of the activities take place in different places in the city. 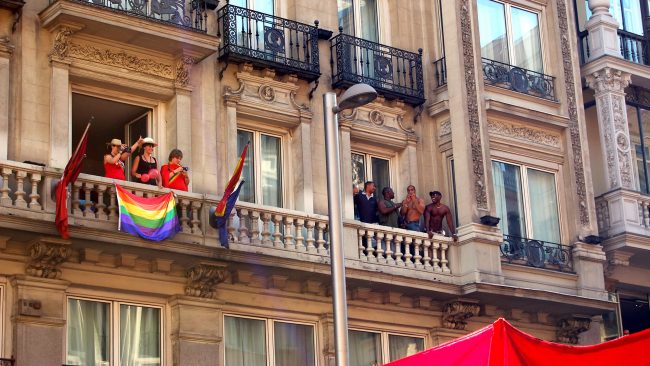 Balcony with the gay pride flag - by Alberto Alvarez-Perea

The most unique thing about this celebration is its parade. He UrParade it runs along the Ría de Bilbao, and in it the floats are replaced by boats decked out for the occasion.

The Valencian municipality of Gandía boasts of celebrating gay pride for a whole month. The activities begin on June 28 with the raising of the multicolored flag and the reading of the manifesto from the balcony of the town hall. 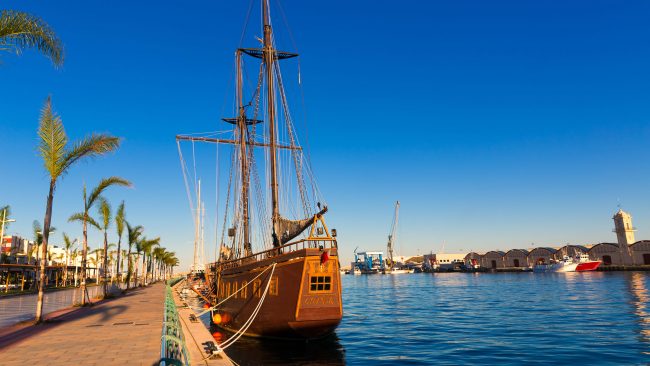 On the last day the civic march, a demonstration that runs along the Paseo Marítimo accompanied by various musical groups. This parade begins in front of the Hotel Bayren on Paseo Neptú and ends at the Plaza del Club Náutico.

Gran Canaria is not far behind, since in the town of Maspalomas gay pride is also celebrated in style. In this town they put aside speeches and solemn acts and make the party the protagonist. 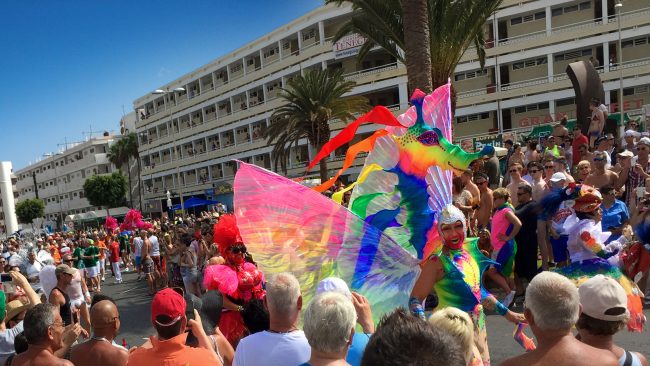 El Maspalomas Pride It takes place in May and lasts for two weeks, during which various parties, concerts and shows are held. The main area during these days is the Yumbo Centrum Shopping Center.

Highlights its manifestation of gay pride, better known as ride, in which everyone dares to dress up and accompany the participating floats.