Gay tourism in the world 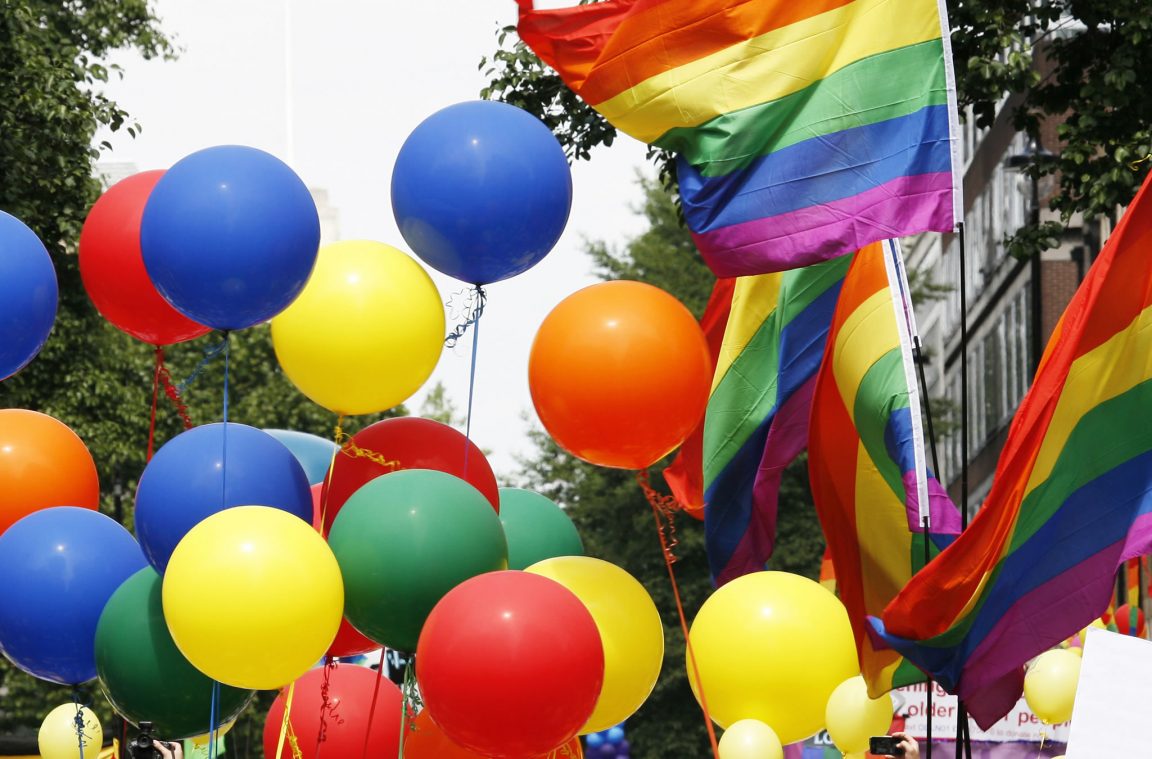 El LGBT tourism around the world is, in general, a modality that is booming, especially in the best countries to be gay, among which Sweden, Belgium, France, the Netherlands, the United Kingdom and Canada stand out. The best destinations and Pride marches are in these and other countries in Europe and America that we show you below.

Gay tourism in the world

Gayest destinations in the world

El gay tourism It has been booming for several decades, as shown by the most recent statistics provided by the World Tourism Organization (UNWTO). Recent advances in equal rights for the LGBT community have benefited several sectors, including tourism.

Spain is one of the most gay-friendly of the world, with Madrid at the head of the list of the most consolidated cities in this sector. According to the UNWTO, it is the city with the most vitality, hospitality, tolerance and diversity in the country.

The Chueca neighborhood is, without a doubt, the most popular area of ​​this great capital of the homosexual tourism. The week of LGBT Pride parties in Madrid takes place at the end of June, coinciding with the International Gay Pride Day, a global holiday that takes place every June 28. 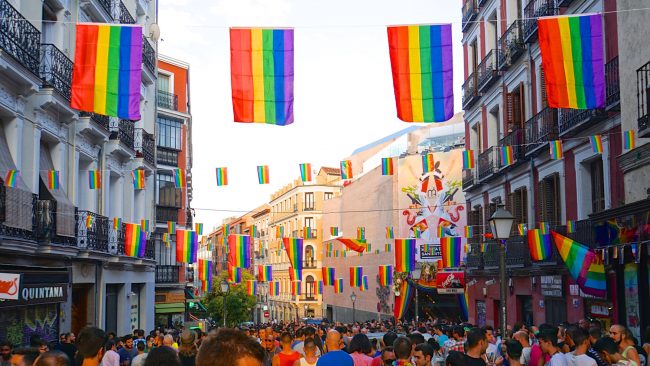 En Barcelona is the municipality of Sitges, become the quintessential gay tourism town in Spain, especially the nudist beach of El Muerto. Although all Sitges beaches are suitable, El Muerto is the one that offers a more relaxed atmosphere as it is one of the least crowded.

Berlin and Amsterdam They are two of the most liberal European cities. In Berlin are the muds of Schöneburg y Prenzlauer, where you can enjoy all kinds of bars, pubs and venues. Amsterdam has a completely open mind and, therefore, there you can find all kinds of establishments for this public.

In addition, more and more European countries are Gay Marriage it is legal. Netherlands, Belgium, Spain, Norway, Sweden, Portugal, Denmark, France, Ireland and the United Kingdom are currently the countries where same-sex weddings are accepted, which makes this continent a highly demanded destination also to get married legally.

Buenos Aires (Argentina) is another of the most popular cities in the world and, in particular, in Latin America. However, Argentina is the first destination more gay-friendly of Latinamerica. In addition to Buenos Aires, other cities such as: 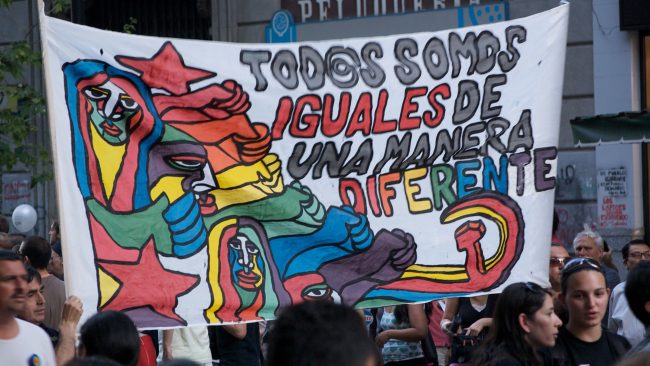 Brazil is another of the countries in which LGBT tourism has been growing in the last decade. Both in São Paulo and in Rio de Janeiro two of the major LGBT Pride parties in the world take place. The São Paulo LGBT Pride March gathers 4 million tourists annually, including more than 650 national and foreign tourists.

In addition to Argentina and Brazil, Latin America is also home to several of the main world destinations:

En United States, the main gay destinations are NY (the city with the highest percentage of homosexual population in the country), San Francisco, Los Angeles, Seattle, Chicago and Fort Lauderdale. According to a study carried out by the international organization The Gay Lesbian and Straight Education Network, the statistics regarding the activity of this sector show that it reports about 700.000 US dollars per year of profit. 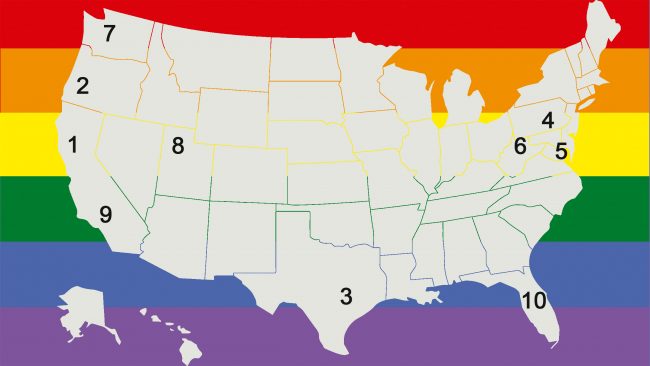 Map of the 10 most gay-friendly cities in the US

Officially, the International LGBT Pride Day, Gay Pride Day or, simply, Gay Pride is a massive event that takes place on June 28 in a large number of cities worldwide.

It is a set of acts in which the protagonists are people belonging to the LGBT community. Usually, it consists of a parade where the protagonist is the rainbow flag, also called liberty flag o LGBT.

One of the most prominent LGBT Pride marches in the world is that of San Francisco, considered the gay capital of the United States. There, the Castro District o Eureka Valley it is the main nucleus for this community. 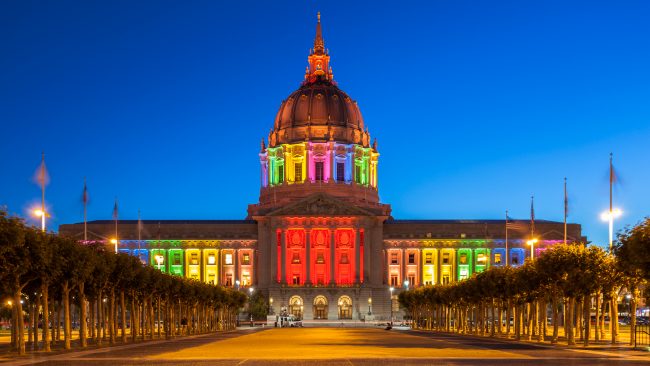 The San Francisco parade is usually held on the last Sunday in June and is characterized by the fact that each group of the LGBT community, that is, gays, lesbians, transsexuals, religious groups ... participates in the event with their own claim.

Madrid ranks # 2 on the list of the best Gay Pride parades on the planet. With Chueca as the main center of the celebration, the capital of Spain hosts everything from open-air concerts to sports activities in honor of this community.

The capital of Germany, Berlin, is one of the main world references in terms of tolerance and freedom. In addition, it offers endless possibilities in terms of nightlife, which makes the Pride march one of the most relevant in Europe. 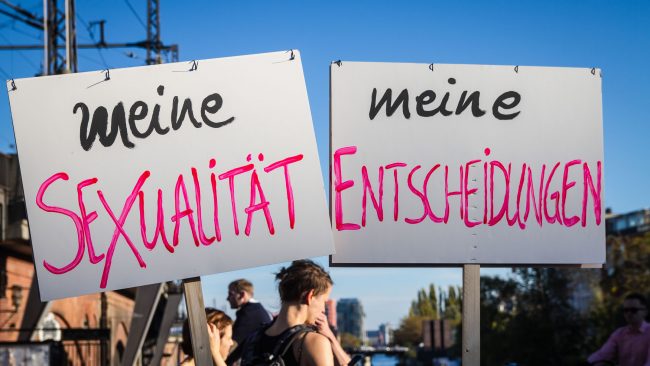 There, this party is known as Christopher Street Day (CSD) and takes place during the last week of June. In it, both a demonstration and the classic parade take place, as well as exhibitions, varied activities and even film festivals.

Moving to South America, the most important parade is probably that of São Paulo, one of the main LGBT foci in Latin America. There, this party is known as Gay Parade of São Paulo and in it you can enjoy the cheerful and colorful character that characterizes this type of event in Brazil.

In Oceania, Sydney is the main reference in terms of LGBT culture thanks to its world famous Mardi Gras Festival. In this city, the Pride takes place at the beginning of March and lasts for 3 weeks, making it the longest-lasting LGBT march in the world.

The parade is a kind of parade similar to the carnival parades and, in it, a tour is made in which Oxford and Flinders streets cannot be missed in commemoration of the origin of the LGBT movement, which began in the former.