Tamu Massif: the largest volcano in the world Around the world we find numerous volcanoes of different sizes. However, there is one that stands out for its impressive surface and the location in which it is located. In article art, we reveal what it is and we tell you interesting facts about it, such as its location.

Tamu Massif: the largest volcano in the world

The official name of the largest volcano in the world is Tamu massif. On the one hand, Tami make reference to Texas A & M University, the old university where several of its discoverers worked.

Likewise, Massif means in french solid. Therefore, it is common to see this nickname translated into Spanish as Massif Tamu.

Although it may seem surprising, this volcano is not on the surface of the earth, but is under the sea, specifically in the Pacific Ocean. It can be found about 1.6000 kilometers off the coast of Japan and it is sunk at 1.980 meters, which makes it difficult to find images of it. The Tamu Massif volcano has a height of 4.460 meters and a depth of 6,4 kilometers. However, what characterizes it as the largest is its total area, which is 260.000 km².

This size can be compared to the area occupied by Great Britain and Ireland together, or New Mexico, one of the fifty United States. This image can help you get an idea of ​​the size of this large volcano: Likewise, it is not only the largest on the planet, but is also among the largest in the world. Solar system, since its dimensions are close to those of Mount Olympus, on Mars.

This important finding was made in 2013 by researcher William Sager, currently working at the University of Houston, and his team. The study lasted for about twenty years.

The Tamu Massif is included within the third largest oceanic plateau in the world: Shatsky Rise. In the past, the Tamu Massif was thought to be a collection of different volcanoes. 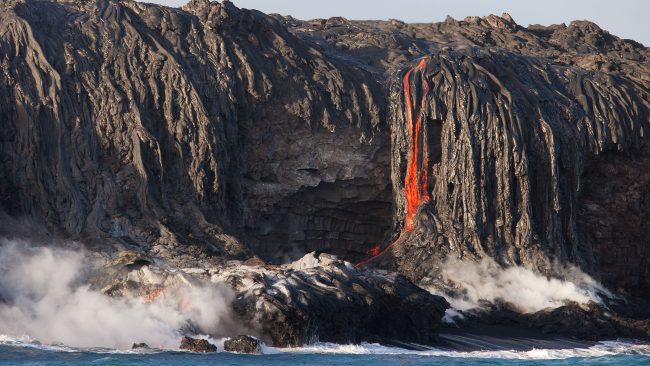 The formation of the largest volcano in the world

This natural phenomenon was formed ago 150 million years, between the late Jurassic and early Cretaceous periods. It was created due to the explosion of several underwater volcanoes.

It is considered a dormant volcano, since it has not erupted for millions of years. Therefore, it has been standing throughout the entire history of mankind.

What is the second largest volcano in the world?

The second largest volcano in the world is Mauna Loa, in Hawaii. In addition, it is the active volcano largest in the world, because in recent centuries it has erupted many times.

Which volcano has the largest crater in the world?

The largest crater in the world is that of the Galán volcano, in Antofagasta de la Sierra, Catamarca, Argentina, as it has a radius of 36 kilometers. It originated more than two million years ago.

What was the largest volcanic eruption in the world?

It is considered that the largest eruption in the world was the one that occurred in the Caldera de la Garita, in Colorado, United States, 27 million years ago. Such was its power that it expelled 5.000 km³ of lava and changed the Earth's climate.