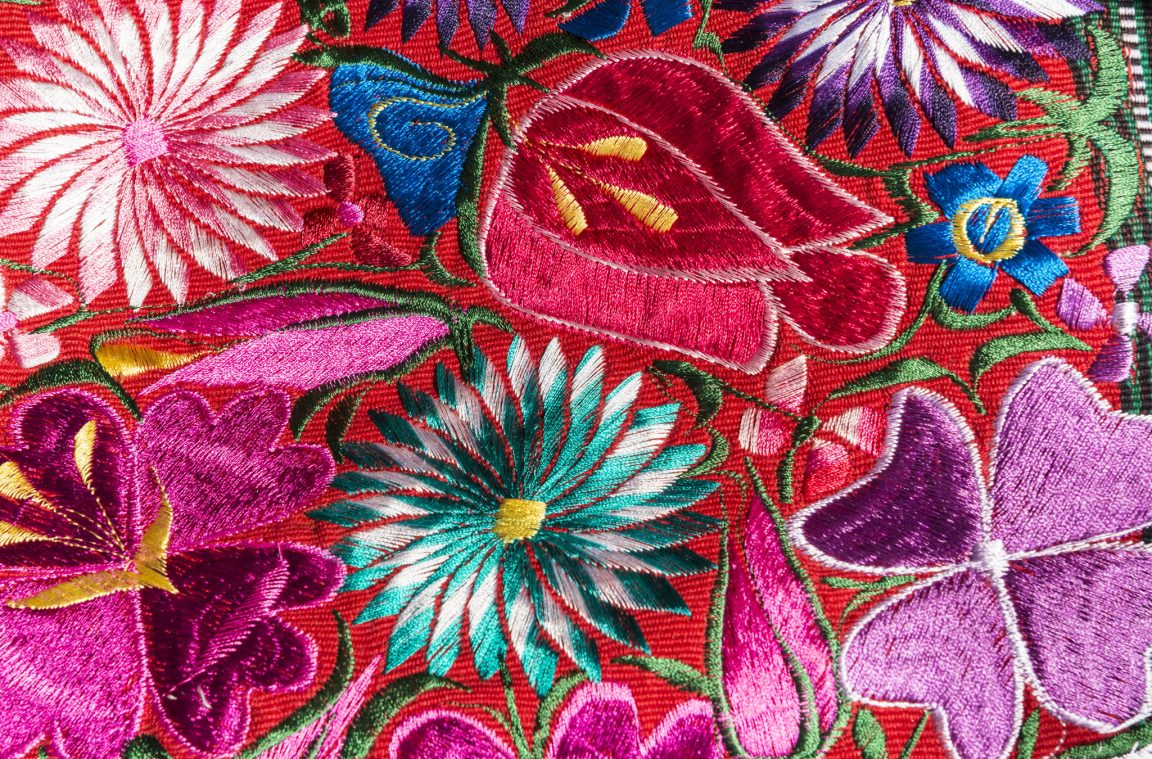 The traditional clothes of Guatemala stand out for being the most colorful in all of America. The traditions that surround the typical clothing of the Guatemalan people are highly influenced by their history. Here we present the main costumes and designs.

Departments of Alta and Baja Verapaz

Within the Alta Verapaz Department, the Cobán area stands out especially, in which the huipiles used by women differ from those of other departments because they are shorter and made of a more delicate fabric. They are known by the name of kembilz o pikbil.

The huipil is adorned with various figures, including the tobacco blanket. It represents beauty, purity and, ultimately, the modesty of women through representative drawings of nature and a cut that symbolizes the sky, darkness and the four carinal points.

The huipil is accompanied by a wide skirt or traditional cut that is usually dark blue, thanks to which a combination is achieved that draws attention due to the contrast between the colors and the texture of the skirt and the huipil.

Under the skirt, it is common for women to wear a petticoat (female undergarment) of green color, although there are also white or red, decorated with wide or small stripes. Married women wear a woolen headdress known as tupui o tupuy, which symbolizes the coral snake, considered the messenger of the gods. 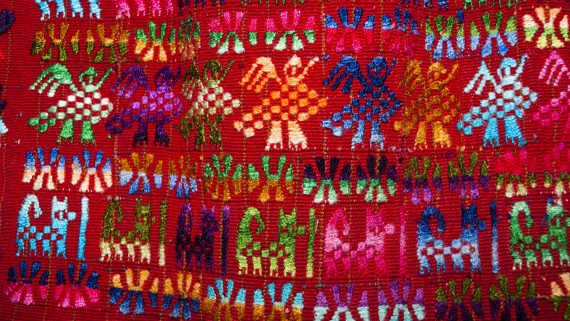 In addition, the indigenous women of this area of ​​Guatemala wear silver necklaces and rings called jackals, which are a symbol of wealth, so the woman who wears it does so with great pride. The rings are decorated with little birds, spheres, wild animals ... and the necklaces are usually made with old coins and end in a cross called howsh.

For its part, in Baja Verapaz, the girdles that women wear on holidays stand out, which are adorned with zig-zag motifs. In their day-to-day lives, it is one of the few Guatemalan communities where women do not use a girdle to hold the cut, but the ends are twisted and tucked inside it. The huipil in this case is made of a single canvas, with a round neck and without opening for the head.

During the patronal feast of this department it is especially frequent to see that Chimaltec women usually wear a huipil characterized by its wide red stripes to frame the shoulders. They are stripes of geometric designs alternated with drawings of animals and sections of multicolored lines.

Although nowadays the use of the traditional costume is being lost and is usually only seen in older people, below we list its characteristics for men and women:

The suit of the new generations is the result of a combination of fabrics and a multitude of colors. This is the reason why it is common to see Chimaltec women dressed in skirts made with typical fabrics pleated at the knee. Instead of wearing huipil, the most common today is to wear a colored blouse, usually adorned with various lace or embroidery. 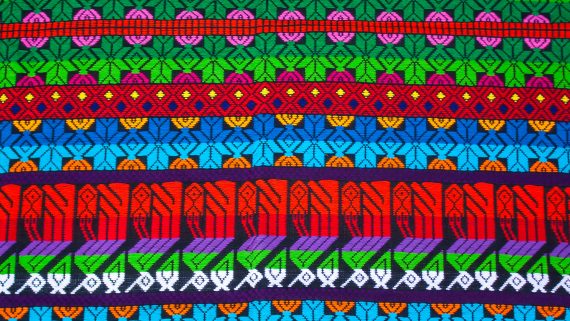 In the municipality of San Juan de Comalapa, the so-called overgrowth It is the most traditional clothing, since it is the garment that is used during ceremonial festivals. It stands out for being divided into the following parts:

If these three parts are observed in their entirety, three designs are appreciated that are associated with the three layers of the cosmos according to the culture of this department: heaven, underworld and earth. The blue background with white stripes represents the sky (blue color) together with the purity of the Comalapa lands (white color).

Huehuetenango is a Guatemalan department located in the northwestern region of the country. From this area, the costumes of the municipalities of San Rafael Petzal and those of San Ildefonso Ixtahuacán stand out, whose cuts are almost identical.

In the case of Ixtahuacán, the women usually dress in a huipil, as in the rest of the Guatemalan departments. Here the huipil is characterized by including silk embroidery and its wide square neck. Of course, there is no shortage of the characteristic geometric designs and the stripes of varied colors.

The process of making these huipiles is long and requires a lot of dedication on the part of the weavers. Thus, the canvases are woven on a stick loom and are joined through small colored stripes. Tubular cuts are also woven into a stick loom, which is characterized by the following: 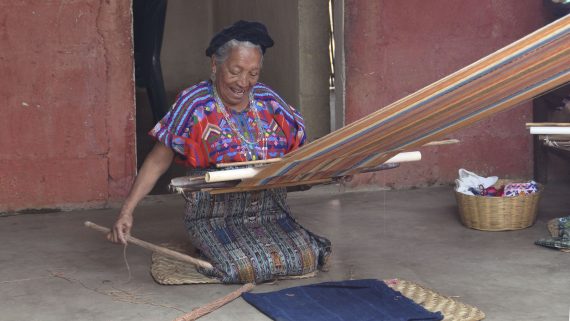 Woman weaving on a stick loom (Guatemala) - by eileeninca

Currently, most of indigenous communities Guatemala continues to use the stick loom to make their clothing.

The Department of Quetzaltenango is the second largest capital of Guatemala. Known as Xela o Xelaju, is famous among other things for his song "Luna de Xelajú" and "Ferrocarril de los Altos", by Domingo Betancurt (a musician of Guatemalan origin).

One of the most characteristic clothing of this department is the huipil, a garment used by women, made up of the traditional colors of the department, that is, red, yellow and purple. It also usually contains designs of birds, flowers, stars, etc. They are usually made with three canvases made on a foot loom. The neck of the huipil is characterized by its flower and animal prints several. 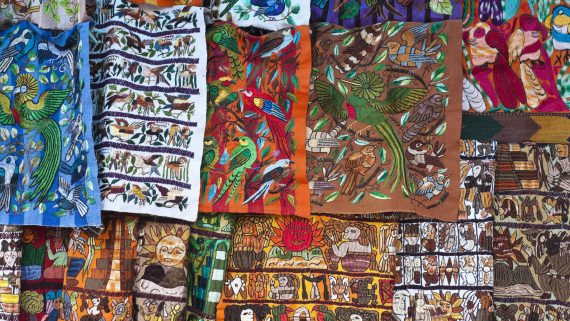 On the other hand, women usually dress in a cut or skirt that is gathered at the waist. It is a narrow sash, made of natural black and white wool. They also usually wear a coat (thin cotton or silk blanket) composed of several intense colors in which mottled threads alternate whose design is reminiscent of the tips of arrows or pens.

In ancient times, the typical costume of this department was that of the municipality of El Palmar. It was a costume of Momostec origin and humble appearance for both men and women. In the case of the man, it was characterized by wearing a black round top hat. They also wore a white long-sleeved shirt and a red band tied at the waist that served as a belt to hold up their pants.

Within the Department of Sacatepéquez, the municipality of San Antonio Aguas Calientes stands out, located very close to the city of Antigua Guatemala. This community is famous for the high quality of its fabrics, where the huipiles are easily identifiable.

The Suchiteco huipil is characterized because its design can be seen whether the garment is on the right or on the reverse. Its brocade design has gone through several phases since its inception. Thus, while in the past it was about geometric designs, currently those based on flowers and animals (especially birds) stand out.

At the bottom, women use a cut, that is, a flat piece of marbled fabric that is made manually on a foot loom and acts as a skirt. It wraps around the waist and is fastened to it by a generally red girdle.

Also highlights Santo domingo xenacoj, a town founded by the indigenous groups of Sacatepéquez before the conquest. During its popular festivals, which take place in early August, women make the typical costume of this festival with cotton. It is composed of a very striking red embroidery huipil and a blue or black cut with vertical lines. 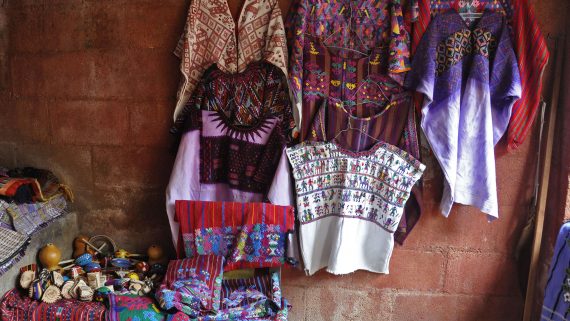 Typical costume of Sacatepéquez - by eileeninca

Sololá is a department that is 2.100 m above sea level from which you can appreciate wonderful views of one of the main lakes of Central America: Lake Atitlán. In this area of ​​Guatemala, the traditional dress of both men and women is used daily.

Thus, the man usually wears a shirt and the woman with the famous huipil. Both have very similar designs, in which the sleeves are never missing. The pants are made on stick looms with the same textile material as the top.

The man uses a very characteristic rectangular garment called knee pad, which is wrapped around the waist and held by a girdle. It is also common for them to wear a bag. It is a type of bag characteristic of hunters, soldiers and pedestrians that is usually hung on the back. It is used to carry provisions, transport some clothes ... 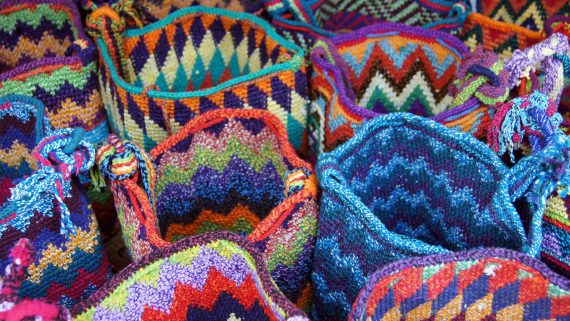 The Guatemalan backpack as a souvenir

For its part, it is common for women to use a cut that is rolled up at the waist. On the head, they usually wear a cuyuscate or ixcaco tzute, a type of cotton whose natural color is brown brown. It is a type of cloth sewn by hand by women, a custom that comes from their Mayan ancestors.

El cuyuscate or ixcaco It is a type of natural cotton whose production is original from Guatemala. It has been used since before 1950 for the use of güipiles especially. As mentioned above, it is commonly used as a female garment to cover the head, but it is also used to, for example, cover food. They can be found in this department of sale to tourists.

In this Guatemalan department, a large part of the local population is dedicated to the production of fabrics that are made on foot looms. Its production does not cover only the local market, but is imported to other towns in the national territory.

One of the most used garments in this department is the so-called huipil o guipil, which consists of a wide cotton shirt or tunic that is decorated with typical embroidery. It is a garment worn daily by women belonging to the different indigenous communities of Guatemala, especially for ceremonial occasions.

Woman in typical costume in Momostenango - by David Dennis

The woman wears a series of silk ribbons in her hair, which are woven on small looms using a tapestry technique that allows the designs on both sides of the fabric to be carefully appreciated.

The different speckled threads are usually dyed with the knotting technique or ikat o ikat. This technique is used to make the famous patterns that can be seen in the typical costumes of Guatemala. Its main characteristic is the dyeing of patterns through ties that is carried out on the threads before manufacturing the fabric.

The costume of the brothers of the Employer's fair Totonicapán, which takes place between September 24 and 29 in honor of San Miguel de Arcángel. It is a ceremonial costume in which a strong Spanish influence can be appreciated, given its silver ornaments and embroidery with silk floral motifs. The purple silk scarves stand out, which belong to each brotherhood and denote the high rank of those who wear them.

This article has been shared 222 times. We have spent many hours collecting this information. If you liked it, share it, please:

Share 222
We use our own and third-party cookies that offer us statistical data and your browsing habits; with this we improve our content, we can even show advertising related to your preferences. If you want to disable these cookies, press the Configure button. To keep all these cookies active, press the Accept button. More information in the Cookies Policy of our website.
Setting
Accept and Continue
Manage consents