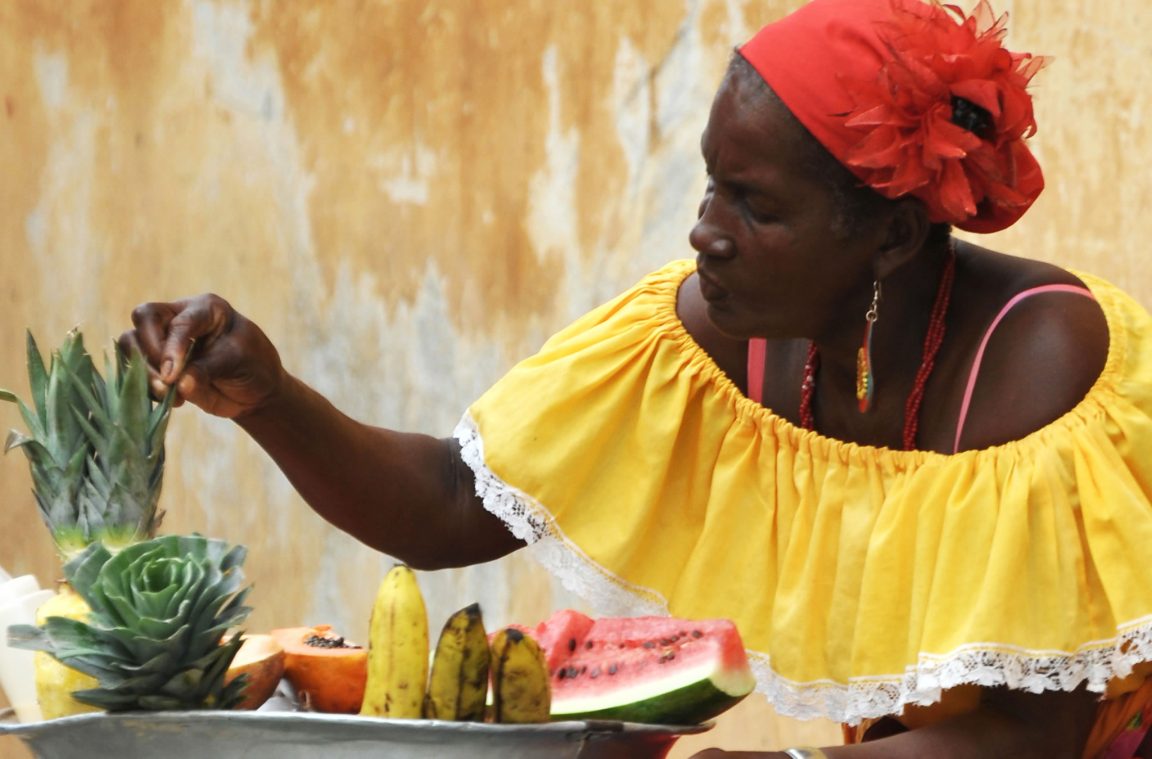 The Pacific Region is an area in which several black communities still coexist today that preserve intact many of the cultural traditions of African origin, including the way of dressing, closely linked to the dances and music characteristic of this place. In the list shown below, you can find all their typical costumes by cities.

The Colombian Pacific coast ranges from Tumaco to Jurado, passing through cities such as Pizarro, Mosquera, El Charco, Guapí, Buenaventura, Nuquí and Mutis.

As mentioned above, communities of African origin still coexist throughout the coastline that runs through this region, the result of colonization. For this reason, it is not surprising that the customs, folklore and way of life of these people are still impregnated today with the culture of their ancestors.

Given that it is an area of ​​Colombia in which the economic situation is quite poor, its wardrobe is therefore simple and reflects the situation of its people. The female costume stands out in particular, which is perhaps the one with the most tradition.

It is usually very colorful, similar to typical costumes of the Andean Region, made from soft fabrics like silk. The color is to the taste of each person and is usually white, pink, yellow, orange, etc. Some women carry it in a simpler way; others, on the other hand, adorn it with gold colored threads, ruffles or embroidery.

The costume described above is usually used to dance the jot, a typical Spanish dance that came to Chocó from the hands of the Spanish colonizers centuries ago.

In the video shown below, we can see an example of jota chocoana, the traditional jota of the Colombian Pacific Region:

As for the men's wardrobe, white silk also predominates in it. They usually wear long-sleeved shirts and white denim pants.

Sneakers or espadrilles are also white, but the fabric is thick, usually made of cabuya, which is a type of thin rope made with pita fiber and used to make handcrafted fabrics.

They can also be made of fique, a type of plant that is used to make textile fibers, widely used also for the creation of typical costumes of Mexico. 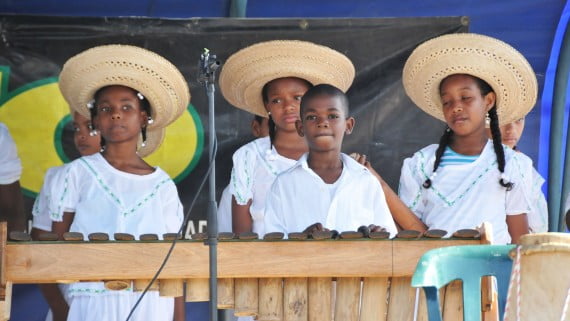 As was the case in the coastal area, in the areas of Valle del Cauca, Nariño and Cauca, the costumes are characterized by being quite informal. In addition, it is a clothing designed to withstand climates that range from temperate to hot during most days of the year, with an average of 26 ° C.

For this reason, the woman uses skirts made of linen or silk fabrics in which pastel colors predominate and shirts with three-quarter sleeves. They also often wear hats or scarves.

And the same happens with the typical costumes of the man. Of an informal nature, they wear rather short-sleeved shirts and linen pants, while in Nariño they can wear woolen clothes in winter season, since it is an area where the climate is quite cold due to its location in the mountainous area of ​​the Central Cordillera.

Also noteworthy are the costumes of the Carnival of San Juan de Pasto (Nariño), known as Carnival of Blacks and Whites, which constitutes the largest festival in southern Colombia.

So much so, that in some municipalities of Nariño and southwestern Colombia, the custom of celebrating this festival that takes place between January 2 and 7 annually has also spread. In the following video you can see what this massive carnival consists of:

The colorful silk costumes worn by those who parade and perform in the streets of Pasto attract thousands of Colombians and tourists from around the world, making it the second most important festival in Colombia after the Carnival of Barranquilla. It was declared Intangible Cultural Heritage of Humanity by UNESCO in 2009.

Quibdó is one of the most important cities in the Colombian Pacific Region, mainly because it is the capital of the Department of Chocó.

The culture of this city is very marked by ethnicity, with the predominant human group (95% of the population) from Afro-Colombian origin, the second largest, of white-mestizo origin, and the rest is made up of an indigenous population.

This mixture has given rise to the multicultural society of which the population of Quibdó is composed, and hence the characteristic designs of their costumes and accessories, widely used when dancing the currulao, the dance par excellence of the Colombian Pacific Region. .

The typical costumes of this city are, as in most cases, closely linked to the typical festivals. Among them, undoubtedly the San Pacho festivities in honor of the patron saint of the quibdoseños, that is, San Francisco de Asís. It is estimated that these festivals have their origin in 1648, when the celebrations were solely of a religious nature.

However, since 1926, these celebrations include parades, dances and exhibitions characteristic of the Colombian Pacific coast in which all the neighborhoods of Quibdó participate.

All the typical costumes of this festival are made in homage to San Francisco de Asís and in them you can see the colors of the Colombian flag and other motifs always very colorful and made with silk.

Capurganá is located in Acandí, in the Department of Chocó, which, in turn, is located on the Colombian-Panamanian border. It is basically a tourist place, inhabited centuries ago by the Cuna, one of the indigenous communities of Colombia, who considered this as the land of chili.

With the passage of time, this tribe moved to the city of Cartagena, which is why the Afro-Colombian community is divided between the Pacific region and said city.

Given its long history, Capurganá has a good handful of parties throughout the year, in which typical costumes stand out, especially those of women.

The most striking are the Chocó traditional festivals, which take place between September and October.

In them, the participants in the various parades dance to the rhythm of the music dressed in costumes of different colors and shapes, such as those that can be seen in the image shown below.

This article has been shared 171 times. We have spent many hours collecting this information. If you liked it, share it, please:

Share 171
We use our own and third-party cookies that offer us statistical data and your browsing habits; with this we improve our content, we can even show advertising related to your preferences. If you want to disable these cookies, press the Configure button. To keep all these cookies active, press the Accept button. More information in the Cookies Policy of our website.
Setting
Accept and Continue
Manage consents