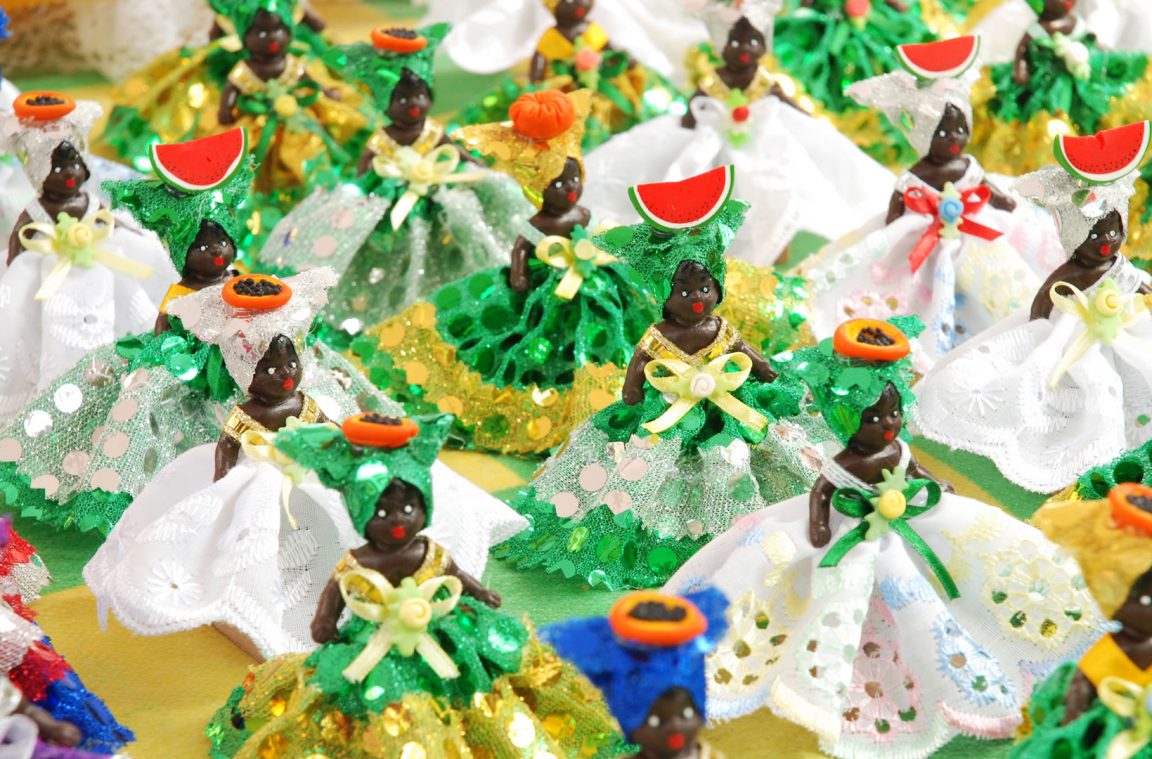 The miscegenation and cultural mix existing in Brazil has been formed over time and, in it, the European and African influence that has given rise to its striking costumes, including the samba outfit, stands out. Here is a list of the most remarkable clothes and their characteristics.

Undoubtedly, talking about typical Brazilian costumes implies making special mention of the Brazilian Carnival, a macro-event that takes place in the forty days before Easter and that marks the beginning of Lent. The most important carnivals in Brazil are those of Rio de Janeiro, São Paulo, Salvador de Bahía, Recife and the municipality of Olinda.

There is no doubt that the most important thing about this carnival are the costumes that can be seen in it. Although it is true that total nudity is not allowed, it does not matter how much clothing is worn, so it is common to see dancers with very few clothes or even half-naked. You can get a more exact idea about the Brazilian carnival with this video:

The Brazilian Carnival has spread to other countries for its fame and its spectacular costumes; thus, for example, within typical costumes of ArgentinaThose of the Corrientes Carnival stand out, undoubtedly inspired by Brazil. 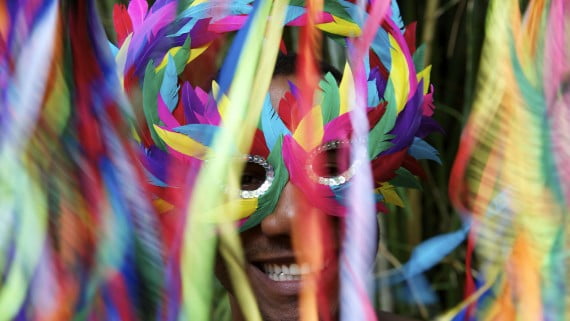 The Brazilian Carnival, quite a show

One of the most characteristic representations of the carnival are the comparsas and the blocks (literally, blocks) or cords, formed by a group of people who dress up according to a specific theme, such as fantasy, brazilian gastronomy, religion, etc.

What is never lacking in her outfit are lights, bright colors, sparkles, hand embroidery and elaborate makeup. Ultimately, most of these suits are hand made and its development can take up to a year or even longer. 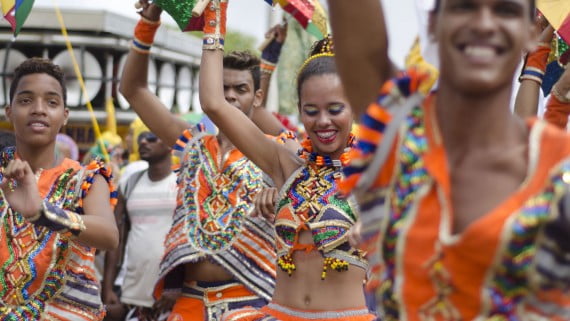 During Carnival there is no lack of shows of samba, the national dance of Brazil. The most important shows of this dance take place at the Sambadrome da Marquês de Sapucaí in Rio de Janeiro, where up to 70.000 people congregate every year.

In addition to samba, other groups of dancers meet at the Brazilian Carnival to represent other characteristic dances and dances, such as the Meeting of Maracatus and Carnival Mesclado, which takes place in the state of Pernambuco, northeast of Brazil.

It is an Afro-Brazilian-inspired performance that has two subtypes: on the one hand, the Maracatu of nation, the most common variant at the national level, and the Rural Maracatu, characterized by a more regional approach. It represents pre-colonial African traditions. At Carnival, about 20 groups of nations they parade in Recife and Olinda. 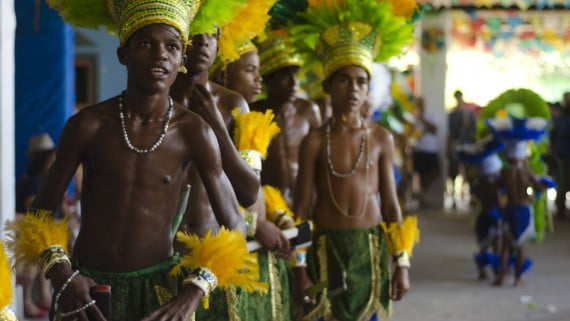 The Junine Holidays (June parties in Portuguese) are a traditional festival that is celebrated in Brazil annually during the month of June and in honor of this same month, as its name indicates, because that is when the Winter Solstice in the southern hemisphere of the planet.

Specifically, the festive period begins on June 13, coinciding with the feast of San Antonio and lasts until June 29, when the feast of San Pedro takes place. On June 24, the day of San Juan is also celebrated.

Typical accessories of the June festivals in Brazil

This festival is celebrated with abundant and delicious dishes, musical shows, dances and parades in which the typical costumes attract the attention, in which, once again, there is no lack of bright colors, flowers and embroidery. The groups of people who parade in the June festivals are called quadrilhas (in Spanish, gangs, that is, a group of people gathered for certain purposes).

The typical costume for men is the outfit known as forest man, which includes a plaid shirt, patched pants made from different colored fabrics, and a straw hat.

As for women, they always wear a calico dress decorated with a large amount of silk ribbons, embroidery and floral motifs, and they also wear a hat. Both children and adults wear these costumes and parade in the quadrilhas of the festa junina of your locality. 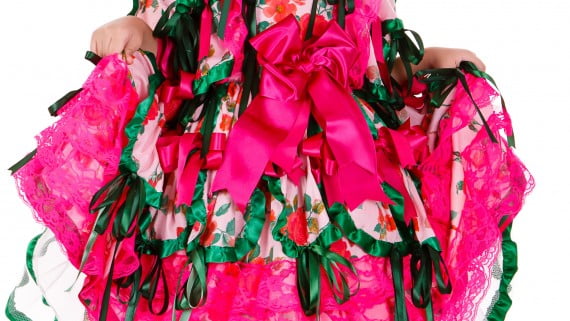 Salvador de Bahía or, simply, Salvador, the name by which it is usually referred to in Brazil, is the capital of the state of Bahia and currently has more than one million inhabitants, who are called soteropolitans.

Given that Salvador is the oldest city in Brazil, what has survived to this day in cultural terms is a mixture of all the generations that have passed through this city.

Possibly the most influential group of immigrants were Africans from the Gulf of Benim and Sudan during the XNUMXth century: the black yoruba y nagos. This group was the one that finished defining the cultural features of Salvador de Bahía, including the characteristics of its typical costumes.

Original from Salvador is the fighting technique that is accompanied by a dance of its own and that today is known throughout the world: capoeira.

This technique is accompanied by an own outfit that is characterized by its simplicity and is made up of pants called abbeys and a shirt both white, and a rope that is tied around the waist. This dance is performed to the rhythm of typical Brazilian instrumentsLike drumstick. 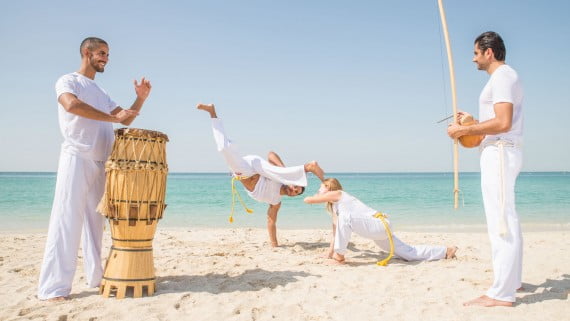 Likewise, the costume par excellence of Salvador de Bahía is that of the Bahian woman, known as bahiana costume o Bahian. The Baiana woman's costume is due to the Candomble religion, of Afro-Brazilian origin, and is a symbol of respect for women.

The Baianas use long and wide skirts that cover up to the feet combined with hand-embroidered white blouses. As accessories, long beaded necklaces and large earrings of different designs are put on. Altogether, this suit is very reminiscent of the indigenous tribes African.

There are different types of Bahian costumes depending on the occasion for which they are used. Thus, the clothing of ração It is the simplest and the one for daily use, while for special events the suit made with Richeleu embroidery is used, in which case the price of the suit can be up to fifteen thousand Brazilian real (BRL).

The pieces that make up a Bahian suit are:

Joinville is a Brazilian town belonging to the state of Santa Catarina and located north of it. This municipality is characterized by its diversity in terms of performing arts and, especially, the dances. In fact, its Dance Festival stands out, in which extraordinary typical costumes can be seen. In the following video you can see a performance that took place during the 2013 festival:

The festival in particular consists of several dance schools and theater companies presenting works in different dance modalities, namely: classical ballet, contemporary dance, jazz, folk dance, street dance and footwork. With such a variety of dances, numerous costumes can be seen in it, from classical ballet attire to dances from other South American countries and even the world.

Among amateurs, the curious and professionals, annually the number of participants rises to 4.000 and the public up to 50.000. In short, it is the largest dance student contest in all of Latin America. 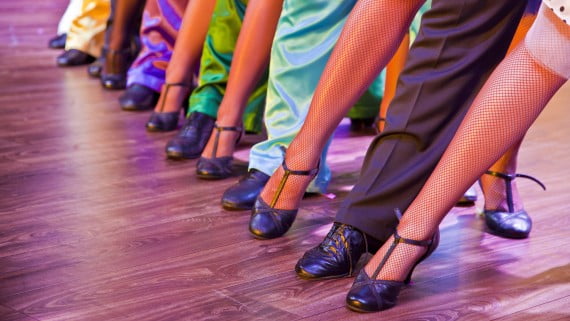 Samba is a Brazilian dance of African origin that has become famous worldwide due to its practice during the Rio de Janeiro carnival at the Sambadrome.

Undoubtedly, one of the most striking aspects of this dance is the costume worn by its dancers, which stands out for its bright colors and its extravagant design, full of sequins, rhinestones, fringes, feathers, etc. In the following video you can see a samba singer performing this famous dance:

Actually, the base of the suit can be a simple garment, such as a bikini or female swimsuit or even underwear. On this basic garment, the rest of the decoration is sewn or glued.

The design and colors largely depend on the theme that will be referenced during the show. Thus, to the base that we have mentioned above, adornments are added on the shoulders that reach the bodice, although this is optional, since many dancers leave their torso exposed without a bra and prefer to opt for the body painting or body painting.

One of the basic rules is that, if a thong is worn at the bottom, its measurement must be at least 4 cm wide or, otherwise, it will not be possible to parade at Carnival. 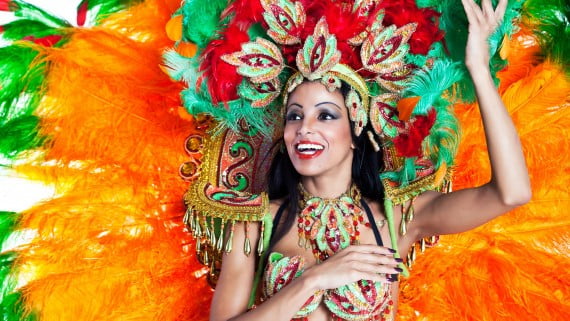 Finally, the suit is completed with two other essential accessories: the striking helmet made of feathers and rhinestones, and some high heel shoes over 10 cm high. The helmet can become a really elaborate element and range from the head to cover the back completely, forming wings.

Beyond these garments, each dancer is free to add as many beads as she wishes (bracelets, anklets, bracelets, necklaces, belts ...). In short, the female samba costume can be really provocative and majestic at the same time.

As for hombres, the suit does not have as much world fame as in the case of women's clothing. The most characteristic of the sambista is that they always wear their torso naked and, in the lower part, they can wear either pants with openings in the legs so that they are half-covered, or simply a loincloth of ethnic design, with feathers and rhinestones.

On the head they can also wear a helmet similar to that of women, although less elaborate. Since samba dancers usually go out in pairs to dance samba, it is very common for their costumes to go together with each other. 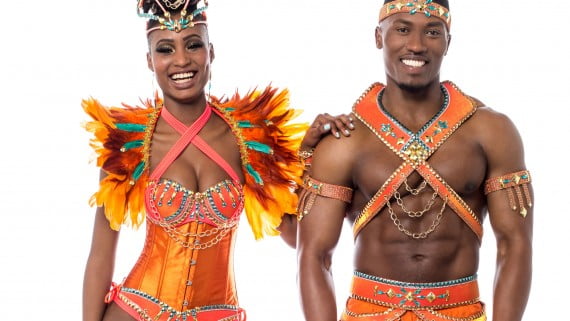 Samba costume for man and woman

The vast majority of indigenous communities of South America it is concentrated in the Amazon rainforest. Specifically, in the state of Amazonas (Brazil) is where the highest concentration of native settlements in this corner of the planet is found, among which the Yaguas tribe.

During the celebration of their traditional rites, you can see some costumes made up of a kind of long furry skirt made with yanchama, an ancient fiber obtained from the tree. hey widely used in the Amazon area, or they can also be aguaje, a very common fruit in the Amazon jungle.

These skirts are usually combined with bangles They can be made of animal teeth, seeds and feathers, or of aguaje. The torso is usually naked or simply decorated with a necklace in the case of women and girls. Furthermore, it is common for them to paint their faces with a red dye that is extracted from the annatto fruit (also known as urucu u onoto). 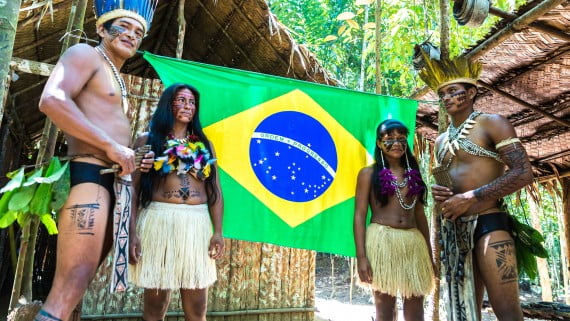 The costumes of the Yaguas tribe of Amazonas (Brazil)
By: Sandra Fernández

This article has been shared 165 times. We have spent many hours collecting this information. If you liked it, share it, please:

Share 165
We use our own and third-party cookies that offer us statistical data and your browsing habits; with this we improve our content, we can even show advertising related to your preferences. If you want to disable these cookies, press the Configure button. To keep all these cookies active, press the Accept button. More information in the Cookies Policy of our website.
Setting
Accept and Continue
Manage consents