The typical costumes of Spain by autonomous communities 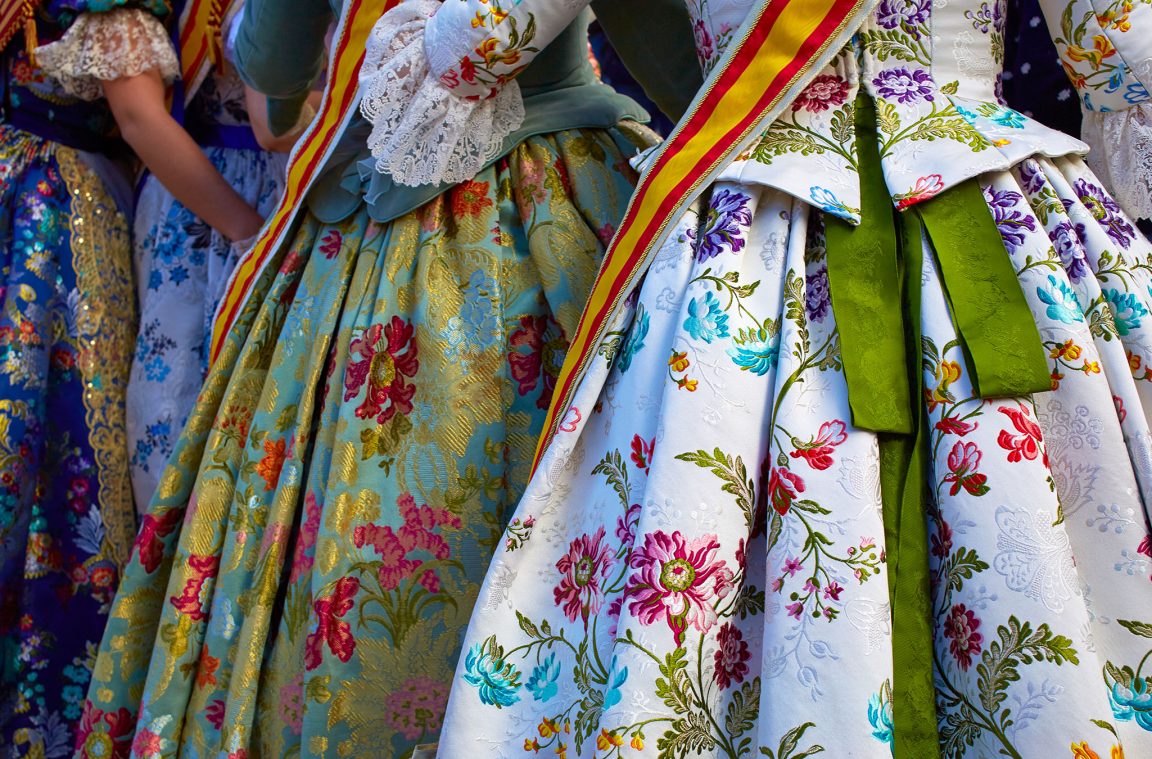 In each autonomous community of Spain we find different regional costumes. In this article, we talk about the traditional clothing of each area of ​​the country, which, although it is not used on a daily basis, it is dressed on special days. In addition, you will be able to see images of the models for both men and women.

The typical costumes of Spain by autonomous communities

In each province of Andalusia we can find a different suit. For example, in Córdoba the one of camper, in which a black skirt or pants, a white shirt and a red sash are worn.

However, the most famous clothing is the flamenco dress, although, originally, its name is that of gypsy costume. This consists of a long and fitted dress with ruffles, which is accompanied by a shawl. As for their hair, they wear it up. 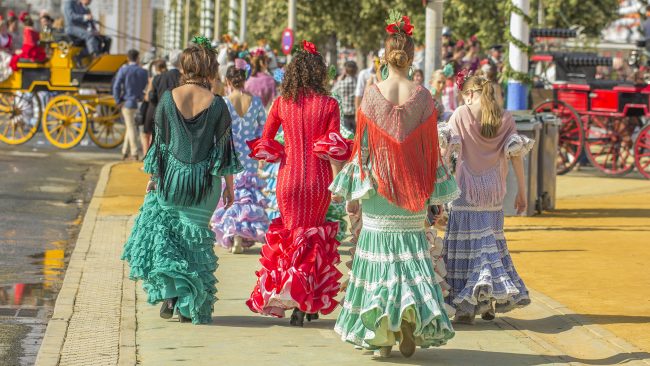 The colorful flamenco or gypsy costumes

The short suit is typical for men. This is made up of a white shirt, a short jacket, trousers and sometimes a vest. Around the waist a sash is put on and on the head a Cordovan hat, that is to say, with a wide brim.

In the following image you can see a drawing of the two regional costumes of this community: 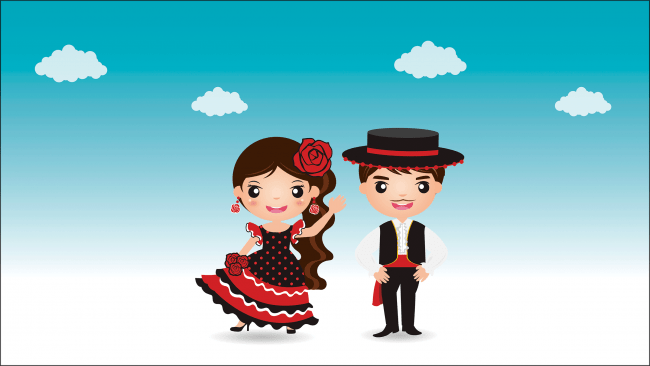 The traditional clothing of Madrid Its the chulapo and chulapa, which comes from the nineteenth century. The date on which we can see the Madrilenians with this clothing is May 15, in San Isidro, although it is also used for other festivities.

The woman wears a tight cotton dress with ruffles at the bottom. This is usually white and decorated with polka dots or diamonds. They also wear a manila shawl to keep warm and a white headscarf. 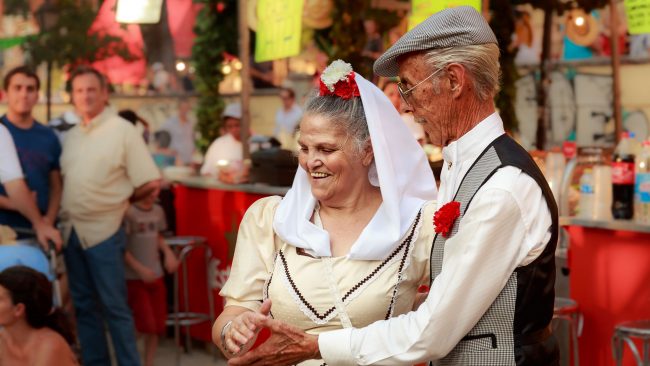 The chulapos wear dark pants called wings, a white shirt and a vest. On the lapel of the vest they wear a carnation and on the neck a white scarf.

The typical Catalan woman costume consists of a thug or net of yarn for the head, a white shirt, a tablecloth to cover the shoulders, petticoat and skirt. On top of it, a black apron is usually worn. In the arms they put some networks of thread called mittens.

As for man, the fundamental piece is the barretina: a red and black hat. They also wear a white shirt, a jupeti or velvet vest, a sash and black velvet pants. They all wear esparto espadrilles. 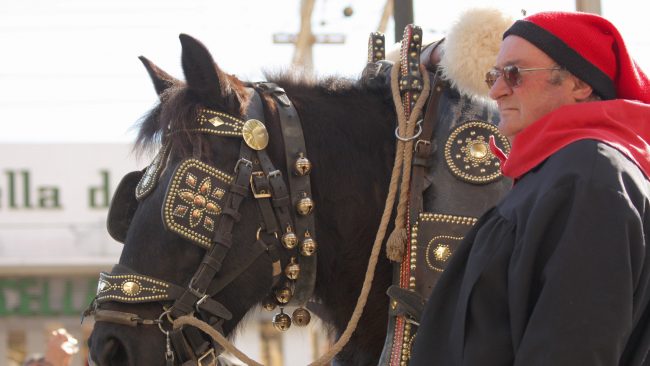 The barretina: the most popular hat in Catalonia - by Jordi Payà

In each province of Castilla la Mancha we find a different variety of typical clothing, which is inspired by that of the XVIII and XIX centuries. For example, in Toledo the one of lagartera. In addition, there are two types: the one for work (the daily one) and the one for Sunday (the elegant one).

Focusing on Sunday, the woman wears a petticoat or cloth skirt, a doublet or black bodice, a apron or silk apron and a shawl. As for the stockings, they can be white or colored stripes. 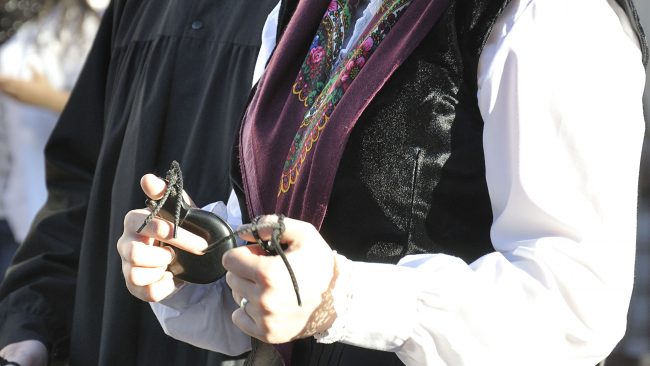 The male model is characterized by a white shirt and a dark-colored waistcoat and pants. Also, a short jacket and a leather or velvet belt are added.

The generalized female costume in the Canary Islands consists of a white blouse, a doublet colored or embroidered, a long striped skirt (petticoats are worn under it), and, occasionally, an apron. The head is covered with a mantilla or a hat. 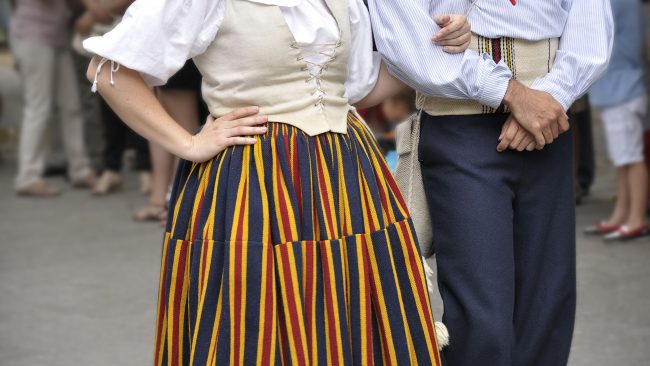 The characteristic skirt of the Canary Islands

The men wear a white shirt with a doublet or vest. The pants or breeches come to the knee and, cinched at the waist, a sash is worn.

There are some elements that are characteristic of each island. For example, in Tenerife they use the Esperance blanket to wrap up warm. On the other hand, in Gran Canaria women usually wear a felt hat.

The traditional costume of Galicia is the one used by the peasants at the beginning of the XNUMXth century. The women wear a long skirt with black ribbons at the bottom and on top of it an apron or apron black. At the top, a white blouse, a vest and a dengue (One black cape that crosses on the chest).

The men wear white shirts, vests, black shorts, and leggings: a kind of cloth that goes from the knee to the feet. Also, a girdle is worn around the waist. 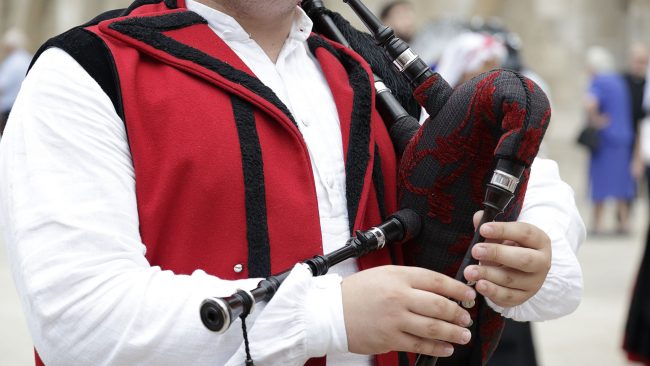 The typical costume of the Galicians

Asturias clothing is similar to this one. However, something that stands out is that in this area the saya or skirt is usually red or green.

One of the traditional costumes of the Basque Country is that of baserritarra. The woman wears a petticoat, a red skirt with a black or blue fabric over it, and a black apron. The back is covered with a black and white cloth, as well as a cloak. They put a scarf on their heads and on their feet espadrilles.

Basque men wear blouses and pants of the same color, a white shirt, a belt, and woolen socks. The head is covered with a txapela: a kind of beret typical of the area. 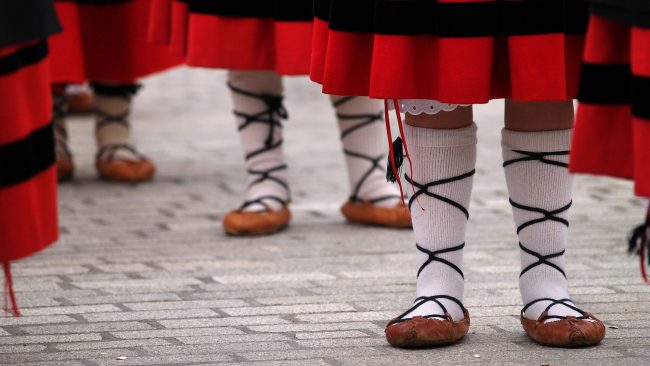 The baserritarra dress in the Basque Country

In Valencia we found the suit of faller, used especially during the Fallas festival, in March. The women who wear it wear skirts printed with floral motifs, bodices of the same fabric, apron and tablecloth for the shoulders. In addition, the hair is gathered in a bun and combs are placed.

Men or falleros have different options. One of them is to wear black pants and short jacket, a white shirt and a colored sash.

In Alicante a similar dress is worn but with different shades. For example, women, who are called Ladies, they cover their heads with a mantilla. The most important festival in this city is in June and is known as San Juan's bonfires. 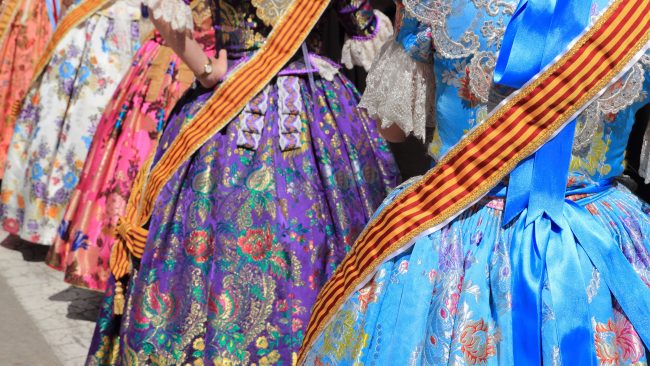 The print of fallera dresses

In La Rioja we find several different models, although one of the most outstanding is that of Albelda de Iregua. Usually men wear a white shirt, two colored ribbons tied on each side and four ribbons on their arms, as well as a colored scarf around their neck.

On the other hand, the woman wears a shirt the same as the man's. To this are added some bloomers White knee-length shorts with colored ribbons and lace, plus a red sash.

The traditional costume of Aragon is that of baturro and baturra. This one has two different models: the daily one and the gala one. In the case of everyday life, the woman wears a petticoat covered by a cotton skirt, an apron, a white blouse or chambra and a cotton cloak. 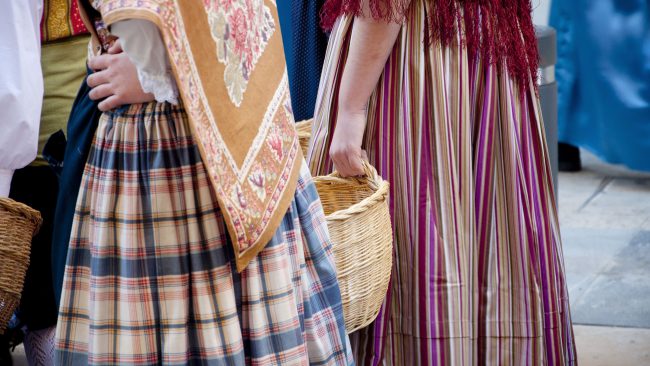 The traditional dress of baturra

The man wears knee-length black pants, a white shirt, a vest and a sash, which is usually red. The head is covered with a cachirulo, which is a plaid scarf.

The folk costume of Murcia has some elements of Islamic origin. The female model is made up of a colored bodice, petticoat or skirt, white shirt, cloak and apron.

The man wears a shirt, embroidered vest, zaraguelles o pants, shorts and socks o socks. A red sash is added at the waist and at the feet espadrilles. 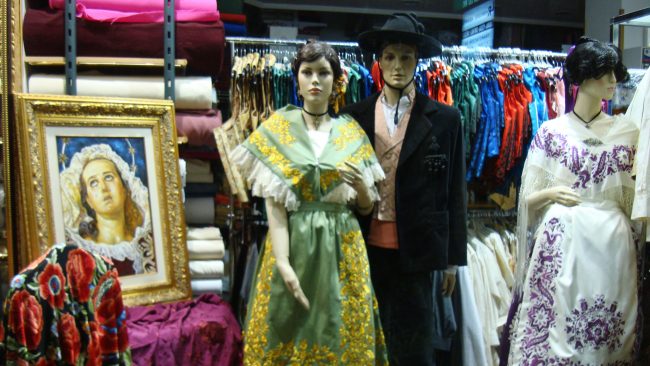 The typical clothing of Murcia - by Carlos Correa Loyola

The traditional costume of Cantabria is that of Highlander. The woman wears a canvas shirt with wide sleeves, a long skirt with velvet straps, a jerkin velvet or corduroy, a scarf on the shoulders and another on the head.

The man wears a canvas shirt, a corduroy or embossed silk waistcoat with a satin back, a dark jacket, cloth pants, and a girdle at the waist. On her head she puts a hat. 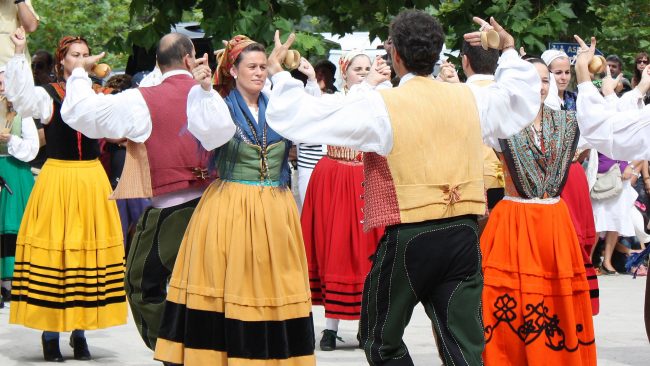 The mountaineer costume, in Cantabria - by Partido Popular de Cantabria

Extremadura and Castile and León

The elements in common between each part of Extremadura are the saya, knee-length breeches, aprons and white blouses. For example, in Montehermoso, Cáceres, colored ribbons and hats adorned with multiple materials are added.

In the case of Castilla y León, they are inspired by those used between the XNUMXth and XNUMXth centuries, although there are also several models. The woman usually wears a white blouse, a cloth skirt, a apron or rectangular apron and a dengue. 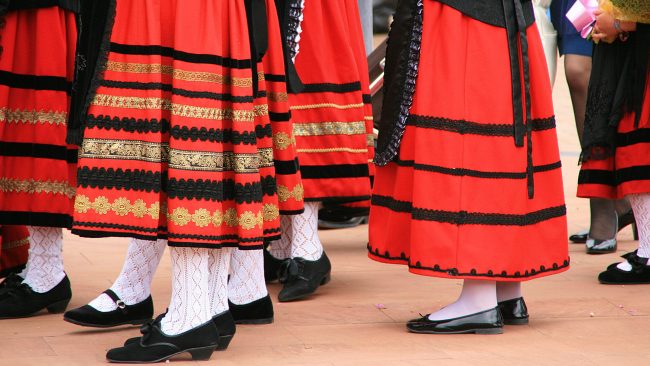 As for the man, black cloth trousers up to the knees, the stockings, the linen shirt with wide sleeves, the black cloth vest and the red sash predominate. On their heads, they sometimes wear a felt hat.

In each area of ​​Navarra a different costume predominates. In the case of Roncal, the men wear a white linen shirt, a closed wool vest, a jacket, dark shorts, and a purple or black sash. On their heads they put a black felt hat.

Women carry two skirts: one inside pleated and one on top of the same color. At the top, they carry a jerkin embroidered and adorned their neck with chokers or necklaces.

In the Balearic Islands we find the suit paid, which comes from the late nineteenth and early twentieth centuries. The woman wears a doublet and skirts. Below these, petticoat y crinoline. On the head is a Coping o cambuix.

El crinoline it is a rigid underwired frame worn under the skirt to hollow out and shape it. 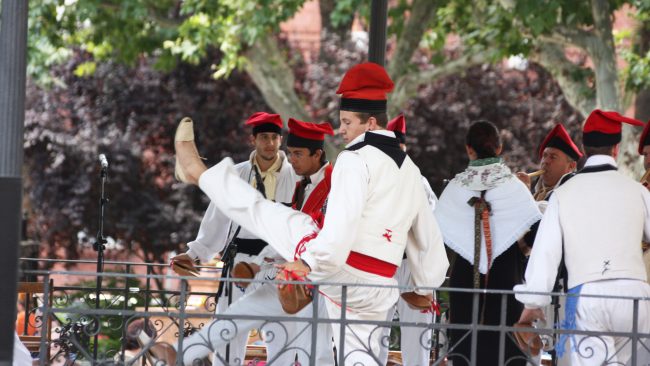 Folklore in the Balearic Islands - by Manuel QC

Men's clothing is characterized by white knee-length or long baggy pants, the sash, the white shirt with a cape, and the hat or headscarf.