The 15 best gay pride parades in the world 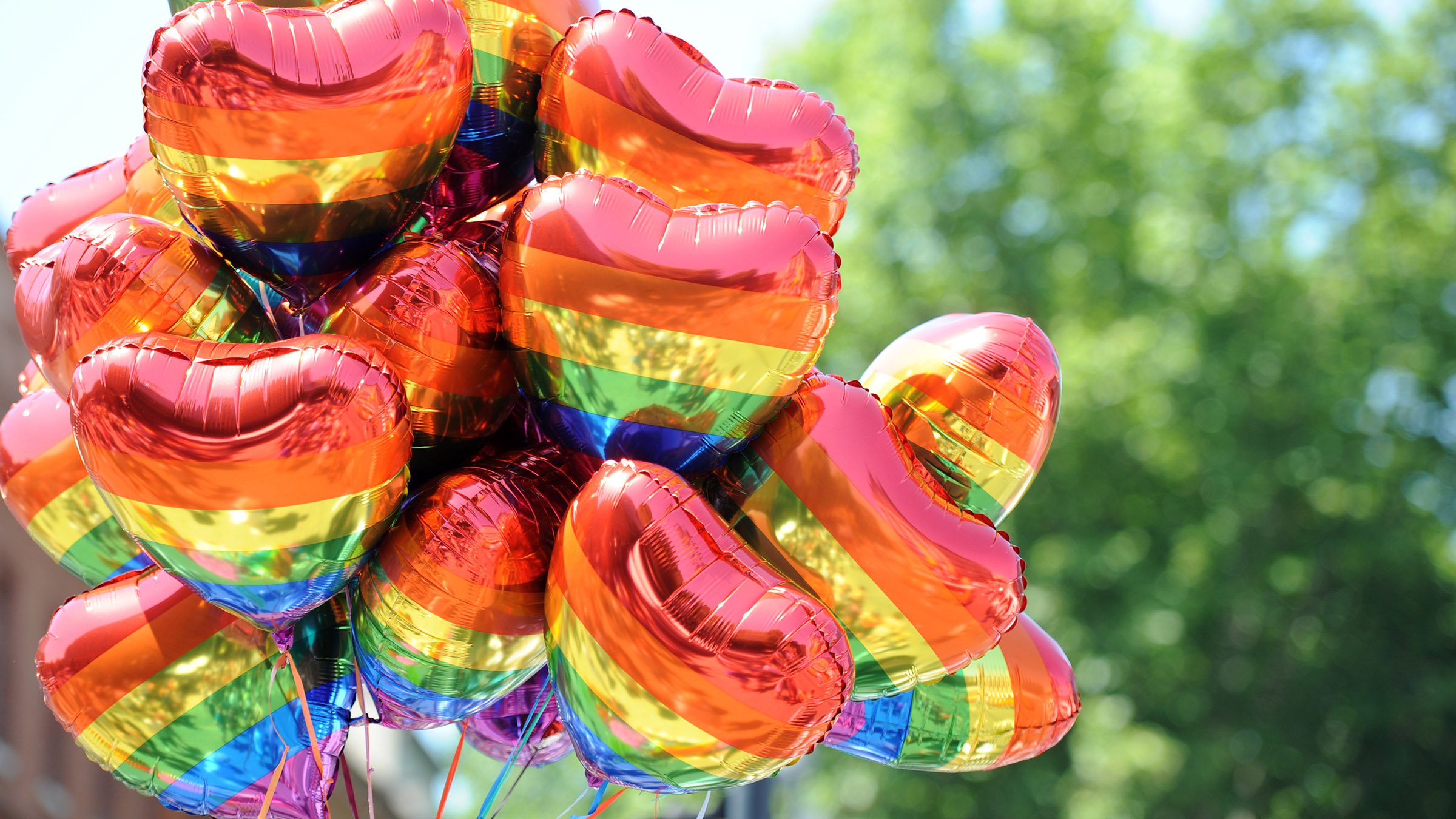 The gay pride march is the main celebration of the LGBT community around the world. Although the official date is June 28, there are several cities that carry out this festival in summer, autumn or even winter. In Europe, the main parade takes place in Madrid. In this article, we show you the most spectacular in the world ordered from least to most relevant.

The main objective of the Gay Pride March of Buenos Aires is the search for equal rights for the LGBTIQ community (lesbian, gay, bisexual, trans, intersex and queers).

Takes place on first saturday of november of each year because it is designed to commemorate the creation of the first homosexual movement in Argentina, called Our world.

The tour begins every year in the Plaza de Mayo, in front of the Casa Rosada, which is the headquarters of the national executive power. It ends in the Plaza de los Dos Congresos around 19:00 p.m. 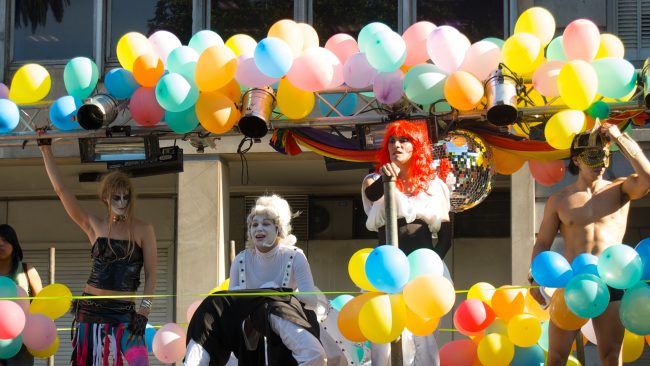 The festival in Dublin, the capital of Ireland, has been booming since the civil union between people of the same sex was approved by referendum. With this, Ireland is gradually becoming a benchmark for the fight for homosexual rights.

Under the slogan Live, love & be proud, Dublin's gay pride unfolds throughout a week full of special activities. St. Patrick's day Dublin Pride Week It is a perfect opportunity to discover what many consider to be the friendliest city in Europe.

Many consider this holiday as the second most important in the country after St. Patrick's Day or Saint Patrick. Colors, music and costumes is what you will find if you go to the Irish capital on the last Saturday in June.

Known as Christopher Street Day (CSD), although it seems that it has nothing to do, this is the name by which the most important festival in Central Europe is referred to, along with Amsterdam. 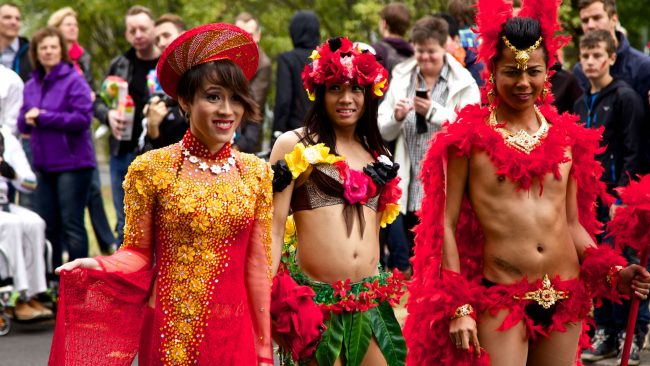 The CSD is a tradition since 1979, coinciding with the origin of the Gay Pride's day in the New York neighborhood of Greenwich Village. However, the German city had already started organizing demonstrations against social oppression in the late XNUMXth century.

The event starts on the last Saturday in June at mid-morning on West Berlin Avenue (in German, called Kurfürstendamm) and culminates in the Brandenburg Gate a few hours later. Some 800 thousand people attend annually.

El Stockholm Pride (Sweden) annually brings together almost 600 thousand people. Lasting approximately one week, the event brings together 153 organizations distributed among floats that fill the streets of the city with color. 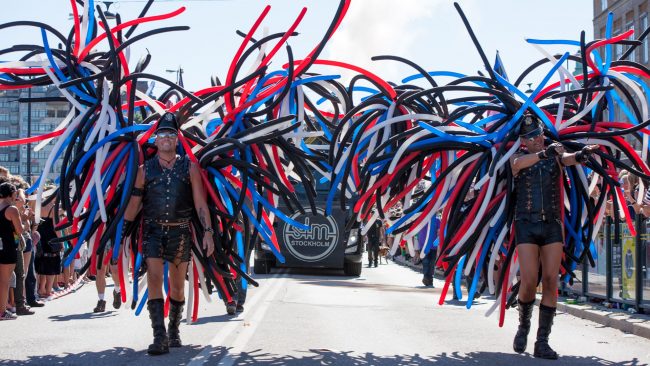 In fact, the Scandinavian city is one of the main meeting points for the gay community in Northern Europe. One of the most striking features is that it is actually focused on families, so that children can also live the experience.

The festive atmosphere is also palpable in the main places of the city frequented by the homosexual public. A good example of this is what is perhaps the most popular pub, called Mr. Gay Sweden.

Mexico is one of the Latin American countries that shows the most acceptance towards the homosexual community, as can be seen by attending the massive march that takes place at the end of June in Mexico City.

The festival always carries a slogan to promote or claim some right towards the community, such as "All families, All rights". It is about ensuring equal treatment and respect for all people regardless of their sexual orientation. 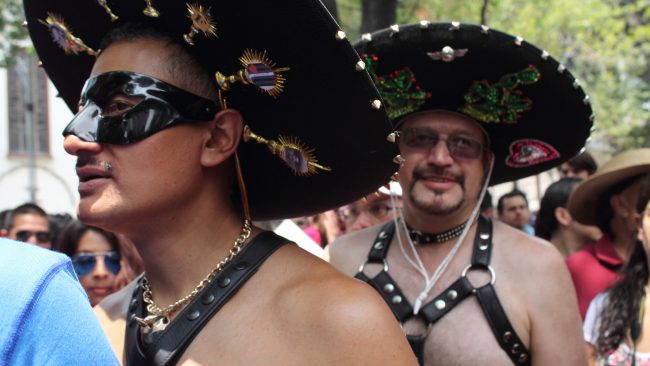 In recent editions, more than 800.000 people from different parts of the country have gathered, as well as foreign tourists. Famous people such as the singer Alejandra Guzmán have actively participated in the event.

France is another of the most tolerant countries with the gay community in the world. In the Marche des Fiertés LGBT (Lesbiennes, Gay, Bi et Trans) More than 500 thousand people participate each year, who walk the streets of Paris in a cozy and, above all, festive atmosphere.

There are several goals that are intended to be achieved with this event: promote equality, fight for tolerance and denounce discrimination. On June 28, the parade begins at the Louvre Museum at approximately 14:00 p.m.

More than 90 organizations spread over 40 floats participate in the march that lasts about 6 hours in total. Highlights of the city such as Boulevard Saint Michel, Place de la Bastille, Boulevard Saint-Germain or Place de la République are crossed during the tour. 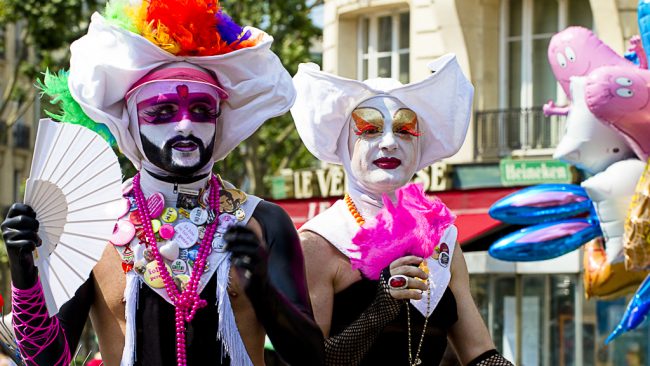 Maspalomas is the star destination for him gay tourism sun and beach. This has endowed this municipality located in the south of Gran Canaria with a large influx of homosexual public not only in summer, but throughout the year.

For this reason, during the first fortnight of May one of the Europe's most animated tours: The Gay Pride Maspalomas. Numerous live concerts are organized in Yumbo Center (Playa del Inglés), a shopping center specially dedicated to the LGBT community.

Since 2014, ProGay organizes the Winter Pride Maspalomas in this Canarian municipality, an event similar to the festival of elder pride but which takes place in autumn, specifically at the beginning of November, lasts for a week.

Gay Pride Day is one of the most important dates of the year in Toronto (Canada), where the largest parade in America takes place along with San Francisco (USA). It is estimated that more than a million people attend each year. 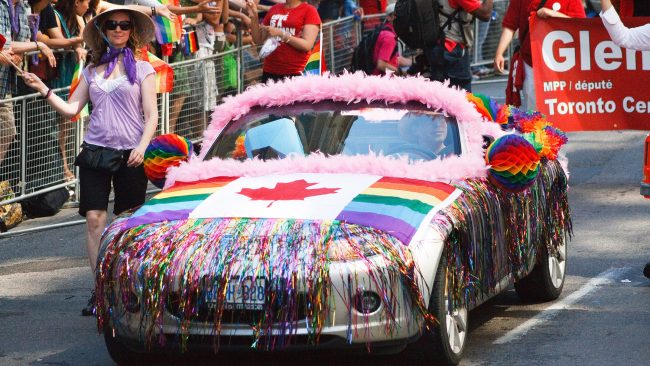 El Pride Toronto He dresses in the colors of the rainbow for ten days to promote gay rights and tolerance towards this group. It should also be noted that Toronto is one of the cities most frequented by gay tourists from around the world.

In 2015 a historic event occurred with the assistance of the Canadian Prime Minister, Justin Trudeau, since then become the first active ruler of Canada to parade on Pride Day.

About the event Pride Barcelona lasts a full week (from late June to early July) and is dedicated to the LGBTI pride (gay, lesbian, transsexual, bisexual and intersex).

The most important streets of Barcelona are filled with color and music during the march, with floats, invited artists and national and international tourists. The tolerant nature of the city is one of the characteristics that best defines it.

The tour takes place along Avinguda del Paral·lel and ends at Avinguda de la Reina Maria Cristina, where a large stage is set up for the party to continue until late at night. The pubs and clubs dedicated to the LGBT public located in the Eixample district are also a good option that day.

The week of Pride London is a party dedicated to the commemoration of the lesbian, gay, bisexual and transsexual culture above all. It's one of the UK's main celebrations and one of the main reasons why visit london in summer for thousands of tourists.

En LondonSynonymous with freedom, modernity and an alternative environment, the pride parade is an opportunity to wave the LGBT flag as a way to claim the rights of this community.

The program Pride London It includes concerts, parades and various parties that take place along Baker Street, Oxford Street and Regent Street. The tour ends in Trafalgar Square. In recent years, more than 30.000 people have attended the event. 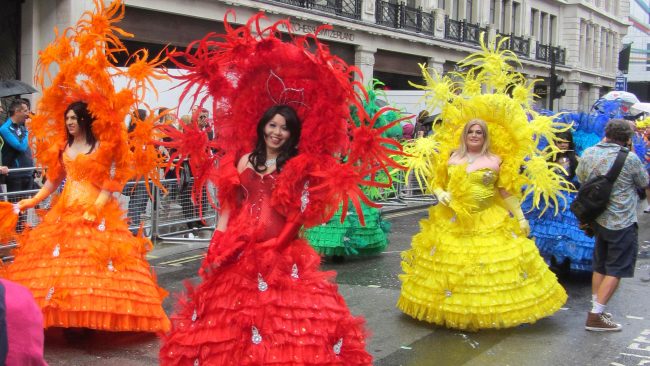 It is also worth mentioning the pride in the English city of Brighton, since the last shows have been gaining a high level of popularity little by little. There it is celebrated in early August and includes the Pride Arts and Film Festival.

El Mardi Gras from Sydney or Sydney Gay & Lesbian Mardi Gras It is the most important parade in the Australian city and one of the most famous events on the planet. It is one of the main attractions for tourists from around the world.

Its origin dates back to 1978, although it began to become popular in the early 80s. Although its name comes from the French language and means "Shrove Tuesday", it does not take place on Tuesday.

It consists of a parade similar to those of carnival that goes through the most frequented streets of the city: Oxford Street y Flinders Street. Although the floats and costumes of varied themes are not lacking, the political and vindictive side of the event has always been maintained. 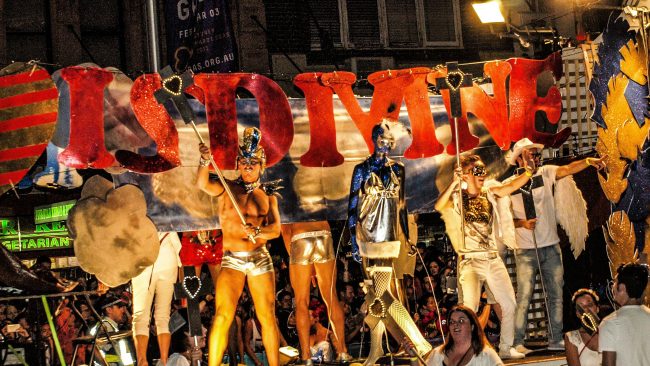 Amsterdam or, what is the same, the happy city of europe It is considered the most liberal in the world, so it is not surprising that there homosexual pride is celebrated in style and openly.

It takes place during the months of July and August. He first saturday in august It is the most important day of the festival, since it is when you can see boats converted into floats along the famous canals of the city.

The capital of the Netherlands was a pioneer in Europe in allowing the opening of the first establishments for this public, the vast majority concentrated on the street Reguliersdwarsstraat.

La São Paulo LGBT Pride Parade It is held annually and its main objective is to fight for equal rights for the entire LGBT community. The first march was held in 1997 and in 2008 attendance records were broken with more than 2 million participants.

The city of São Paulo is the main focus of homosexual pride in Latin America. The party is in keeping with the festive and joyful character of the Brazilian population, and includes floats with music that circulate along the famous Paulista Avenue. 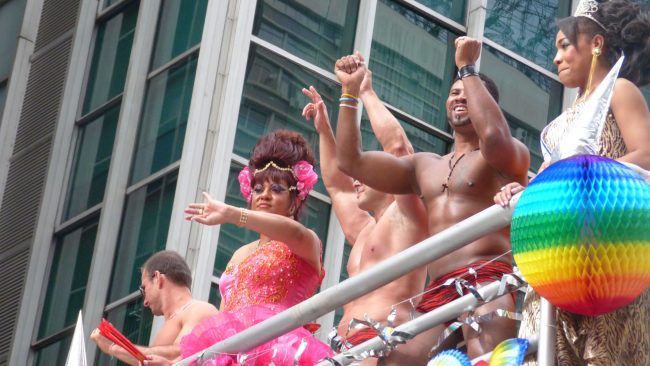 The Brazilian Association of Tourism for Gays estimates that this celebration, which lasts for one week, leaves a collection of about 200 million Brazilian real in the largest city in South America.

El Madrid Pride (MADO) has a duration of one week, approximately from the end of June to the beginning of July, always coinciding with the last weekend of June.

The nerve center of MADO is, without a doubt, the Chueca neighborhood, which in recent years has become a benchmark for the LGBT movement both inside and outside of Spain. Chueca square and Augusto Figueroa, Gravina, Pelayo, Libertad and Fuencarral streets with the main points.

The party, which takes place on the last Sunday in June, begins in the morning and has the characteristic that it is organized by contingents, that is, groups of people who dress up for a specific theme, demonstrate for a specific reason, etc.

The most important contingents are: 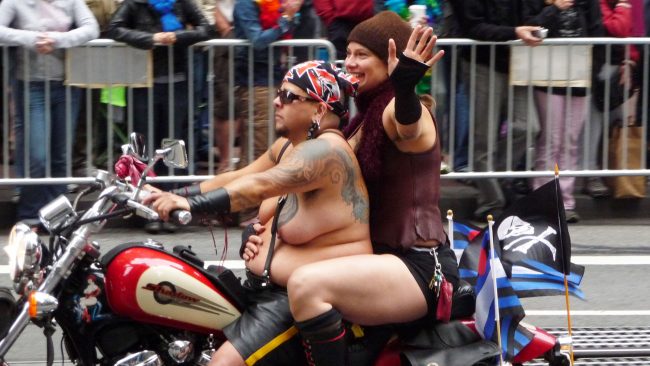 For its part, the leather subculture is at the same time closely related to the world of motorcycles, so it is not surprising that there is another contingent that parades in honor of this theme. Although this subculture is more common in the male homosexual community, today it is increasingly equaled.

The first lesbian S / M group, called Samois, was created by Pat Califia, a recognized activist for lesbian rights in the United States, specifically in San Francisco, where he managed to publicize this subculture also applied to lesbians. As we see according to the colors of its flag, it is highly influenced by aesthetics heavy metal. 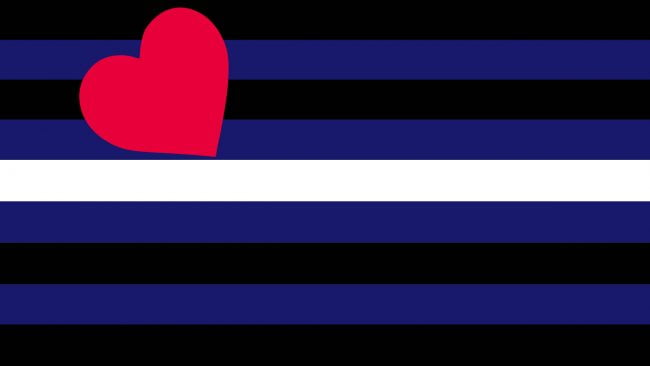 The tour begins on Market Street, passing through Beale Street until reaching the XNUMXth. If you are planning to attend this macro-event, our advice is to arrive early to get a good place.