The typical dances of Venezuela 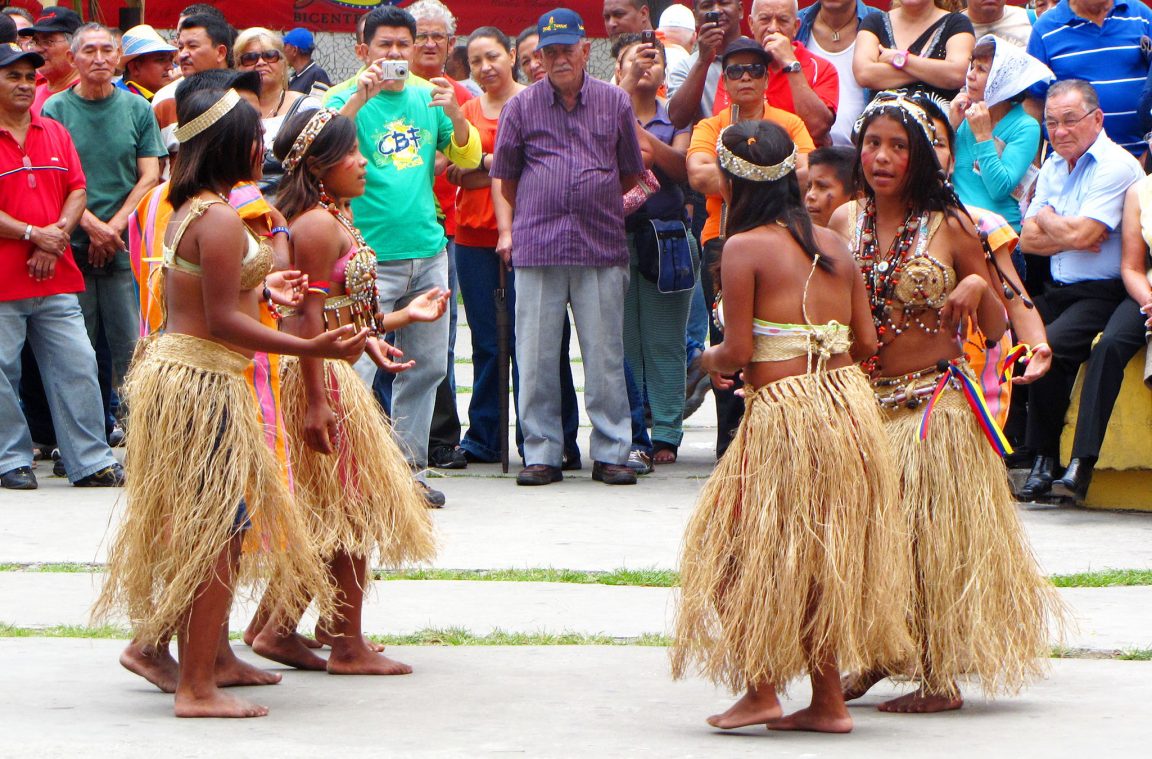 In Venezuelan culture we find different traditional dances that are interesting and picturesque. In this article, we talk about the most prominent ones, we indicate in which states and regions they dance, and we show you images and videos about them.

The typical dances of Venezuela

This traditional dance is also known as the tapes o the stick of the ribbons. It has its origin in Europe, specifically in the dance of the Maypole. After the dance there is a theatrical representation about the conquest.

A sebucán is a kind of tool of the indigenous people of Venezuela that resembles this stick with ribbons, hence its name. The music that accompanies the dance has African overtones.

The joropo is the most representative dance in Venezuela and is practiced throughout the country, although it has its origin in Apure. The instruments used to interpret the music are the harp, the cuatro (a kind of guitar), and the maracas, although in Barines and Portuguesa the bandola is used instead of the harp.

There are several types, which predominate depending on the area of ​​the country in which we are:

A popular joropo is Alma llanera, by Rafael Bolívar Coronado.

The most famous is the llanero type. To dance it, women traditionally wear long and colorful dresses. It has a certain relationship with the Mexican syrup from Guadalajara, which you can learn more about in this article: Traditional dances of Mexico.

In the burriquita, the main interpreter wears a kind of suit or disguise that represents a donkey and its rider. It is performed on September 30, although it is also typical of Carnival and Christmas dates. It is practiced from the colonial period. 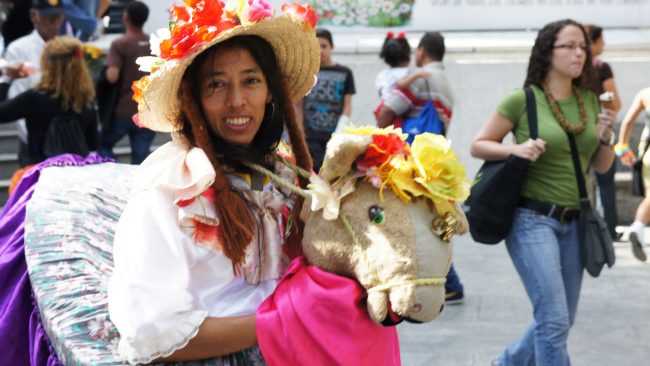 The burriquita: a curious Venezuelan dance - by Luigino Bracci

Although the calypso is a dance native to Trinidad and Tobago, in this country they have their own variation: the Calypso of El Callao o Venezuelan calypso. After visiting the town of El Callao, in Bolívar, to work in the gold mines, the former slaves of the XNUMXth century were the ones who brought it to the area.

The Calypso of El Callao is a mixture of music from Venezuela and the Caribbean that is performed mainly at Carnival. The lyrics of this can be sung in Spanish or English.

This regional dance is performed in different towns, among which we find Naiquatá, Cuyagua, Chuao, Tinaquillo, Tucuyito and San Francisco de Yare, and is performed on Corpus Christi day.

In it, men dress in red and cover their faces with large wearing masks. It originates from Africa and came to the country with former slaves who were present during the colonial era.

With it the cult of the Blessed Sacrament and the triumph of good over evil are carried out. The interpreters dance through the streets to the church, before which they kneel. In this video you can learn more about this curious dance:

It is one of the most surprising traditions in Venezuela. If you want to know the rest, we recommend the following article: Venezuelan traditions and customs.

The snake is an aboriginal dance from the tribe of the cape, belonging to the chama. It is traditional from Ipure and is related to a popular legend.

Before, it was danced by men and women, but today only women do it. A group of 25 dresses in black and yellow and is ordered by height. With the collective movement they imitate the movement of the serpent.

The monkey dance is danced in Caicara de Maturín, Monagas, on December 28. It is also a dance from the indigenous culture of the area, specifically from the chama. Originally, it was interpreted to attract good harvests.

All the dancers are disguised as crazy or homeless, with their faces painted black, except for one person who is disguised as a monkey. She leads the dance and all the performers are held by the waist.

In addition to the monkey, there is also the character of the butler or foreman, a woman who imposes order among the people who participate in the dance. It takes place in the Monódromo, a square specially prepared so that thousands of people can enjoy the dance. In the following video you can see the great public that this dance gathers:

The mare mare is an indigenous dance that can be danced in honor of three different aspects:

In this dance, the performers take steps back and forth. Men dress guayucos or loincloths, and women long robes. The lyrics are improvised on the spot.

The bagpipe is typical of Christmas and is practiced throughout the country, although its origin is in Zulia. The hymn of this genre is The Gray Zuliana, by the composer Ricardo Aguirre.

The guarandol bird is represented mainly in the state of Anzoátegui, although it is common for it to be danced throughout the country. In it several people dance and sing, but three stand out main characters:

The story that is interpreted is that of the guarandol bird, which is chased by a hunter. Although he manages to kill him, the witcher ends up resurrecting the animal.

This typical dance of the Manabí culture has Spanish origin. In it, the dancers carry machetes, baskets and other elements that are used in the cocoa harvest.

At first, it was interpreted to thank nature for the crops received. It is more than 300 years old.

The Dance of San Benito is practiced in Zulia, Mérida and Trujillo in honor of this saint. People, dressed in white (sometimes yellow), dance through the streets.

Both men and women participate and it is danced in December and January. The main instrument is that of the chimbanqueles, a kind of typical drums of the area. 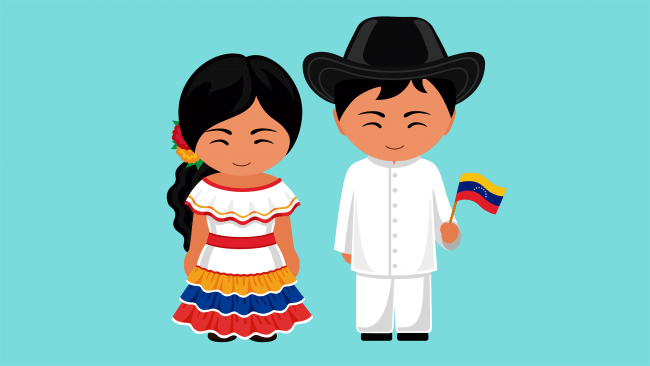 The typical clothing of Venezuelan dancers

Las turas is a dance Indian religious sense that is represented in the states of Lara and Falcón at the end of September by the ethnic groups ayamanes y jira jaras. It is celebrated to thank nature for the abundance of crops.

It is danced in the open air and in it a hierarchy of characters is respected, which are the following:

Foreman
It is the highest authority, who makes sure everything is done properly.
The Queen
is the host of the dance. She wears a crown of feathers on her head.
The Butler
He watches over the different aspects of the dance, such as the setting and the place where the candles are placed.
The hunters
thirteen people who are in charge of taking animals from the mountain.
The musicians
they are a total of six.

The dancers are men and women who run and jump. Together they form a semicircle and their arms intertwine. Also, they stomp on the ground. After the dance, the religious ceremony takes place.

Chimichimitos is a dance that children mostly dance. It comes from a legend on the island of Margarita, which says that chimichimitos are spirits of people who have died before being baptized and have become a kind of goblins.

According to legend, these characters chase children to take them to caves forever. The dancers stand in a circle or line, and a boy and a girl play an elderly couple who stand in front of the other participants, although other characters may also appear. It is typical especially of the Carnival.

Share 64
We use our own and third-party cookies that offer us statistical data and your browsing habits; with this we improve our content, we can even show advertising related to your preferences. If you want to disable these cookies, press the Configure button. To keep all these cookies active, press the Accept button. More information in the Cookies policy of our website.
Setup
Accept and Continue
Manage consents