Gastronomy of Greece: the most typical dishes and desserts 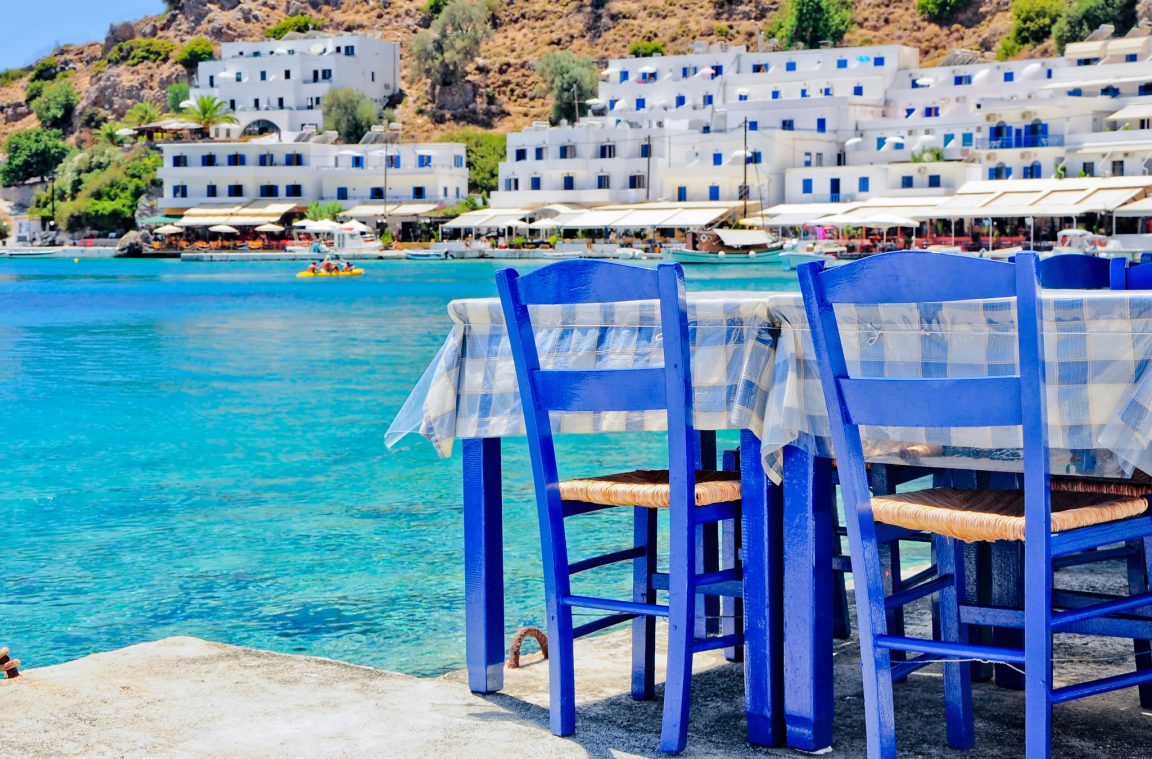 Greek gastronomy is characterized by its varied flavors and the simplicity of its preparation. Greek food recipes include as a basic ingredient the olive oil, spices and a wide variety of condiments and fresh vegetables, including tomatoes, aubergines, green beans and potatoes, as well as fish and meat.

Gastronomy of Greece: the most typical dishes and desserts

It is a white bean stew that many Greek cookbooks define as the star dish of Greek cuisine.

Its basic ingredients are beans, broad beans or beans and olive oil, as well as some vegetables such as carrots, peppers, onion, celery, etc. It is usually garnished with some bay leaves. 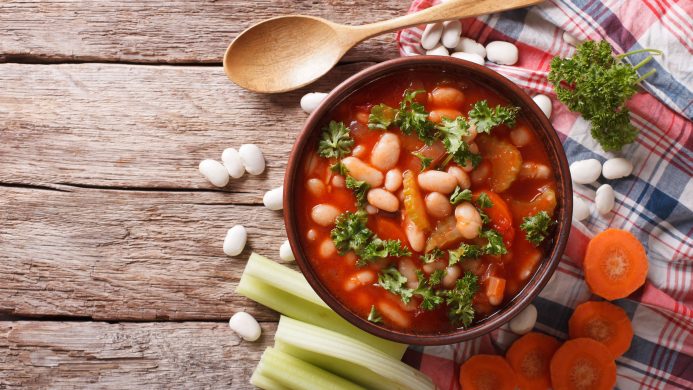 La Musaka Greek is very similar to Italian lasagna and, in fact, is considered to be its origin. The main ingredient in this lasagna is aubergine, which is sliced ​​and layered.

It is also common to accompany it with layers of minced meat, which is usually lamb meat, and cheese is added to the top layer, which remains au gratin when baked. It is usually presented in a rectangular mold.

How to make aubergine musaka

It is a traditional cheese from Greece and also from Turkey, Denmark, Bulgaria, etc. Literally, cheese made means White cheese because of its color.

This cheese is based on the curd of cheese cured in brine and its origins date back to Classical Antiquity.

Normally, it is made from sheep's milk, although it can also be made from mare's milk or half with sheep's milk and half with goat's milk to enhance the flavor. It is a soft cheese, although of a solid consistency, and without a rind. 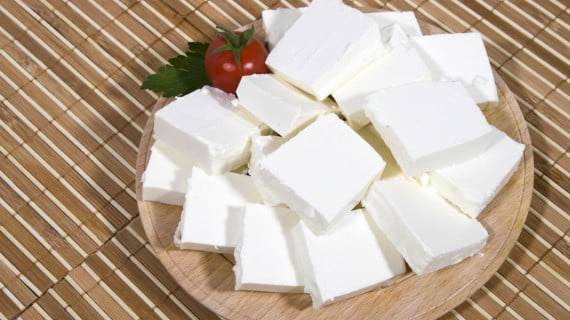 Dish from Turkey known in Turkish as filling, a term that comes from the verb dolmak of this same language, which means fill up.

This dish consists of filling grape leaves with a mixture made of rice, minced meat, onions and a wide variety of spices, and there are those who also add legumes. The dish is finally served with a sauce made from lemon juice. 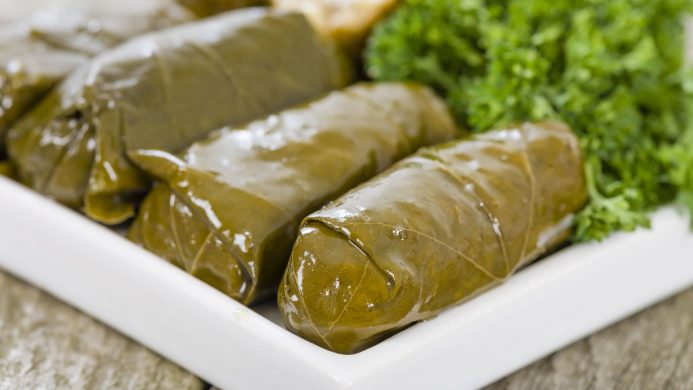 Greek recipes with chard: the dolmades

Tomato and pickle slices, thin slices of red onion and strips of green pepper are added to these ingredients. Finally, it is seasoned with olive oil, red wine vinegar, ground pepper, oregano and salt.

It means filling and it is pronounced yemista. This is a dish that you will find in all the taverns in Greece if you visit the country and that is prepared by filling tomatoes and ripe green and red peppers with a pasta made from rice mixed with sautéed onion, chopped parsley, crushed tomato, crumbled feta cheese, olive oil and salt. This mixture is introduced into the peppers and everything is baked. It is a dish that is usually served cold. 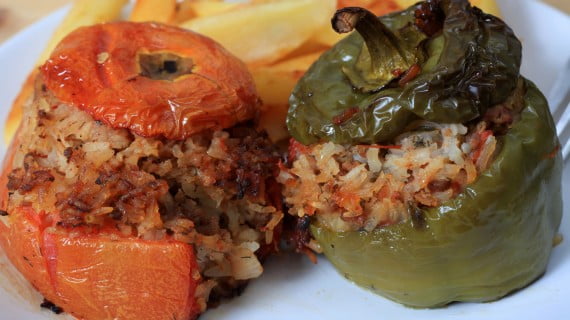 It consists of salmon baked and seasoned at the same time with lemon wedges, lemon juice sauce and olive oil. It is usually served with French fries, peas, and yogurt sauce. 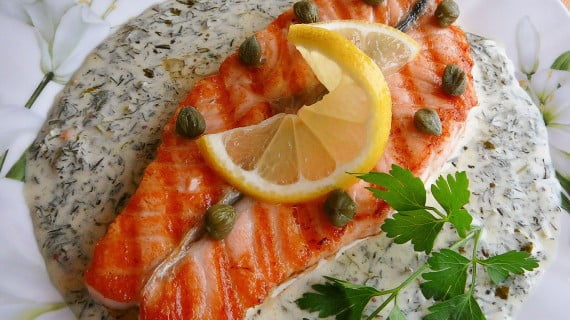 Gyro in Greek it means tour and consists of beef or pork. After being baked, the meat is cut into small slices that are inserted into a pita bread.

They are dressed with various ingredients, including onion slices, green or red peppers, and tomatoes, as well as typical Greek sauces, including tzatziki or yogurt sauce. He gyros It is a dish similar to Mexican tacos or the Arab shawarma. 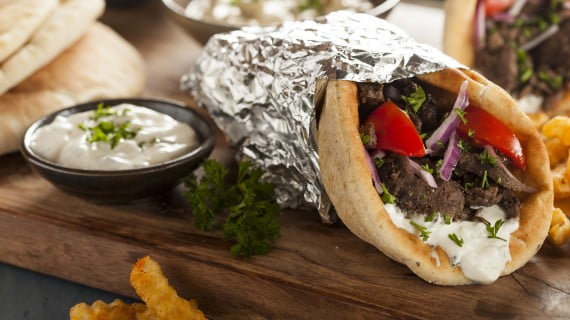 The term papoutsakia means little shoes in Greek and refers to the appearance of this dish, which basically consists of aubergines stuffed with minced meat and covered with cheese. In addition, the recipe includes ingredients such as: chopped onions, olive oil, a glass of white wine, chopped parsley, béchamel sauce, salt and pepper. 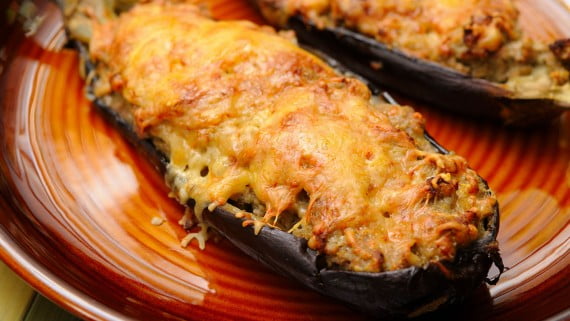 El pilaff o pilaf It is a rice dish with chunks of lamb meat, all mixed with the famous Greek yogurt sauce. The name of pilaf refers to white rice boiled and flavored with spices and onion. 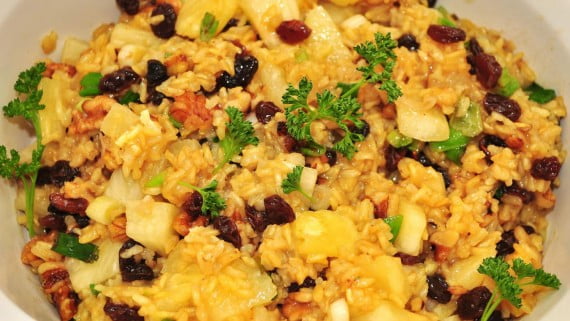 The term meze o half, in plural mezzedes, is of Turkish origin and refers to a selection of small plates Served in Greece as starters during lunch or dinner.

There is a wide range of these small plates, very similar to the well-known spanish tapas, which can be served hot or cold and can have spicy or rather salty flavors, as we will see in the compilation that we show you below:

Tzatziki sauce is the basic accompaniment to all mezzedes and is known internationally with the name of yogurt sauce, although in addition to yogurt, cucumber is also its other fundamental ingredient. Mint leaves, minced garlic and lemon juice are also added to the mixture. 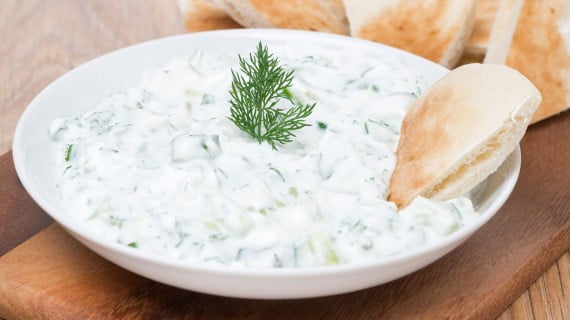 La greek style burger It is another very typical mezzedes. What distinguishes this hamburger from the traditional ones is that it does not have typical ingredients such as melted cheese or mustard-type sauces or ketchup, which makes it lighter and easier to digest.

Its base ingredient is minced lamb meat, to which are added others such as minced onion, parsley and garlic, oregano, ground pepper, etc. Of course, you can't miss the feta cheese, olive oil, and Kalamata olives. Optionally, you can add tzatziki sauce (yogurt sauce). 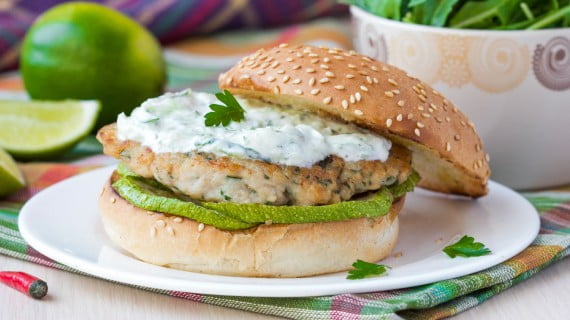 Famous mezzedes also include the famous hummus, which is a paste made from chickpeas, lemon juice, garlic, cream of tahini (paste made from sesame seeds) and olive oil.

It is also a very typical dish from the Middle East, such as Israel, Lebanon or Palestine, among others, although its preparation in Greece differs in part from that of these countries, since Kalamata olives are also often added.

La melitzanosalata is a salad of roasted aubergines and feta cheese, all crushed into a paste, which also includes ground almonds, a clove of garlic, olive oil and vinegar. It is usually garnished with boiled eggs. 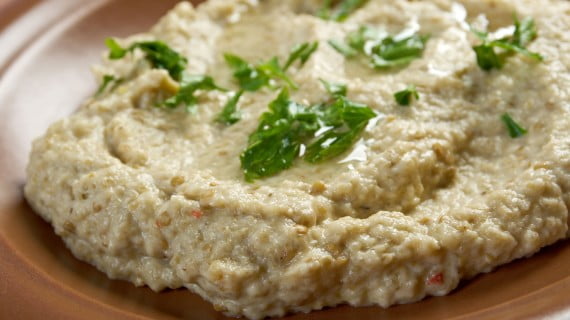 On the other hand, the spanakopita is a cake made with spinach and feta cheese with dill, all wrapped in filo pastry, sold in bakeries around the country.

La tyropite, also known by the name of thyropitaIt is a savory cake that is made from phyllo dough filled with a paste resulting from mixing feta cheese and egg. Like the spanakopita, this dish can also be found for sale in bakeries in the country. 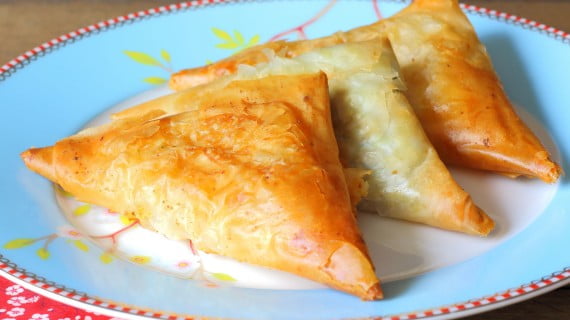 Por último, la taramosalata is a sauce that is also consumed in the gastronomy of Turkey, where it is known under the name of Taramasalata.

La Taramasalata It is made from cured and salted carp roe, although there are also variants in which it is prepared with cod roe. The roe is usually mixed with lemon juice, olives, croutons, onion, etc. It is usually eaten spread on a slice of pita bread.

This sweet is probably the most popular among Greek gastronomy desserts and consists of a filling whose ingredients are minced meat, custard and cheese, all wrapped in filo dough. It is actually a dessert from Macedonia. 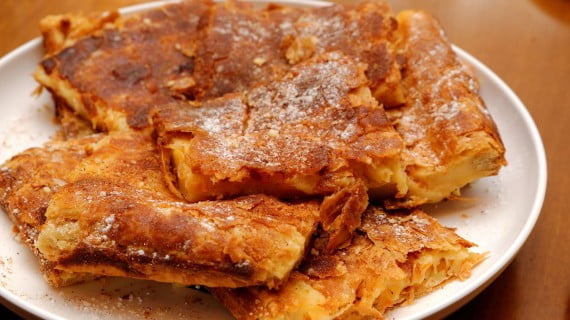 Also called triples, are made with thin dough stretched to form long and thin strips. They are fried in very hot oil and during this process they are bent to give them either a loop or a spiral shape, although they can be found in other shapes.

Once fried, they are dipped in syrup or spread in honey. They are served with chopped nuts and sprinkled cinnamon. It is a typical Peloponnesian dessert that is also served on New Year's Day and at wedding banquets. 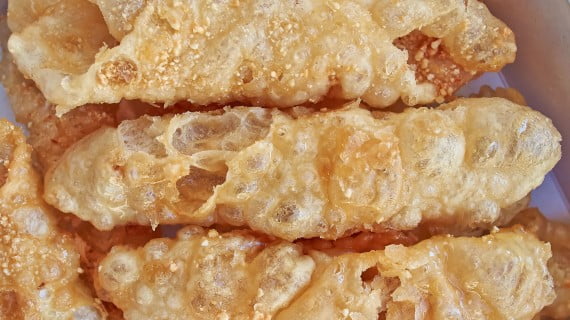 Koulourakia are a typical sweet of the celebration of Holy Week in Greece, which is usually eaten after Holy Saturday.

These are handmade shortbread cookies that are often shaped into a bow, braided circle, or Greek letters and topped with egg frosting. Vanilla and sesame seeds are used to make it. 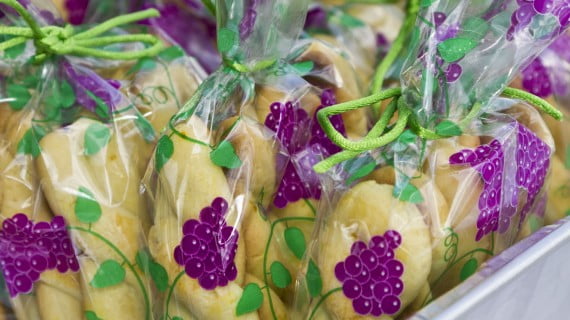 In singular, kourabiesIt is also a shortbread cookie made from ground almonds. In its preparation there is usually a touch of brandy, usually metaxa, apart from vanilla, rose water or mastika (liquor flavored with mastic).

They are usually shaped into a ball, although there are also other crescent-shaped or wavy versions. It is a typical Greek Christmas sweet. 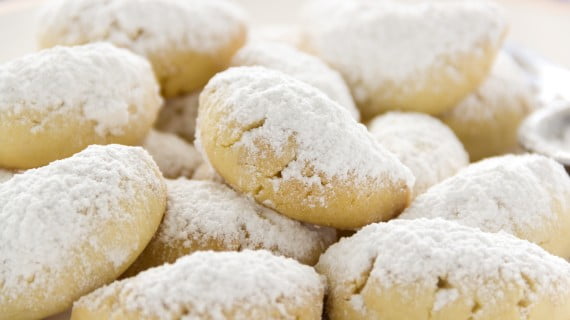 In plural melomakaronaIt is a very typical Christmas sweet. This cake is made with flour, honey and oil, although other main ingredients are also used, such as semolina, sugar, orange, brandy, etc. It comes in the shape of a ball. 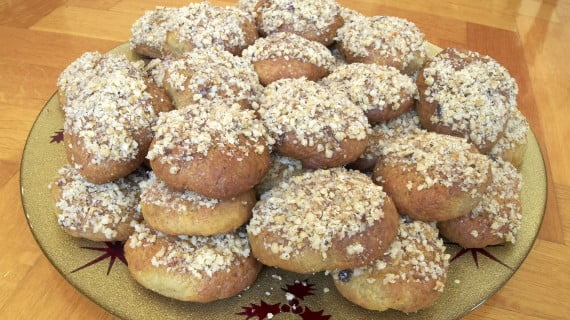 The term Revani It is of Turkish origin and in Greek it is known well with its original name and well with the form ravani.

It is a typical Greek and Turkish sweet that consists of semolina in syrup. For its presentation, pine nuts, walnuts, grated coconut or a scoop of ice cream are usually added. 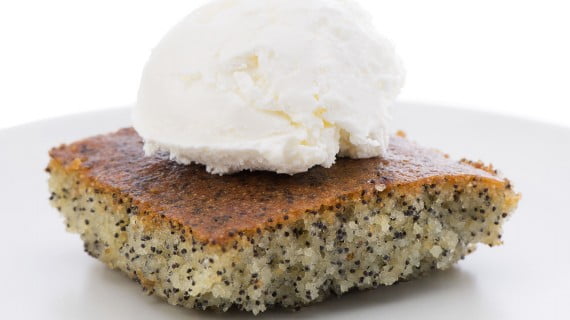 This dessert, also called tulumba dessertIt is made with pieces of unleavened dough no longer than 10 cm. Each piece is given an ovoid shape. They are fried in very hot oil and once they are fried, syrup is poured into them while they are still hot. They are served cold. 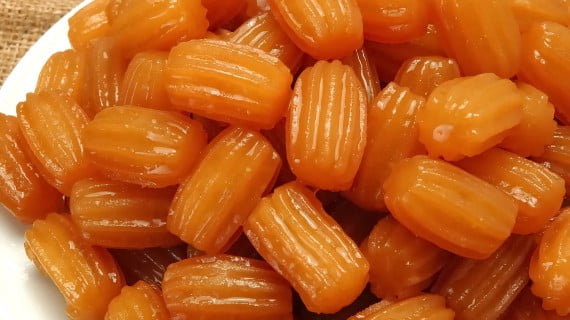 This article has been shared 437 times. We have spent many hours collecting this information. If you liked it, share it, please:

Share 437
We use our own and third-party cookies that offer us statistical data and your browsing habits; with this we improve our content, we can even show advertising related to your preferences. If you want to disable these cookies, press the Configure button. To keep all these cookies active, press the Accept button. More information in the Cookies policy of our website.
Setup
Accept and Continue
Manage consents