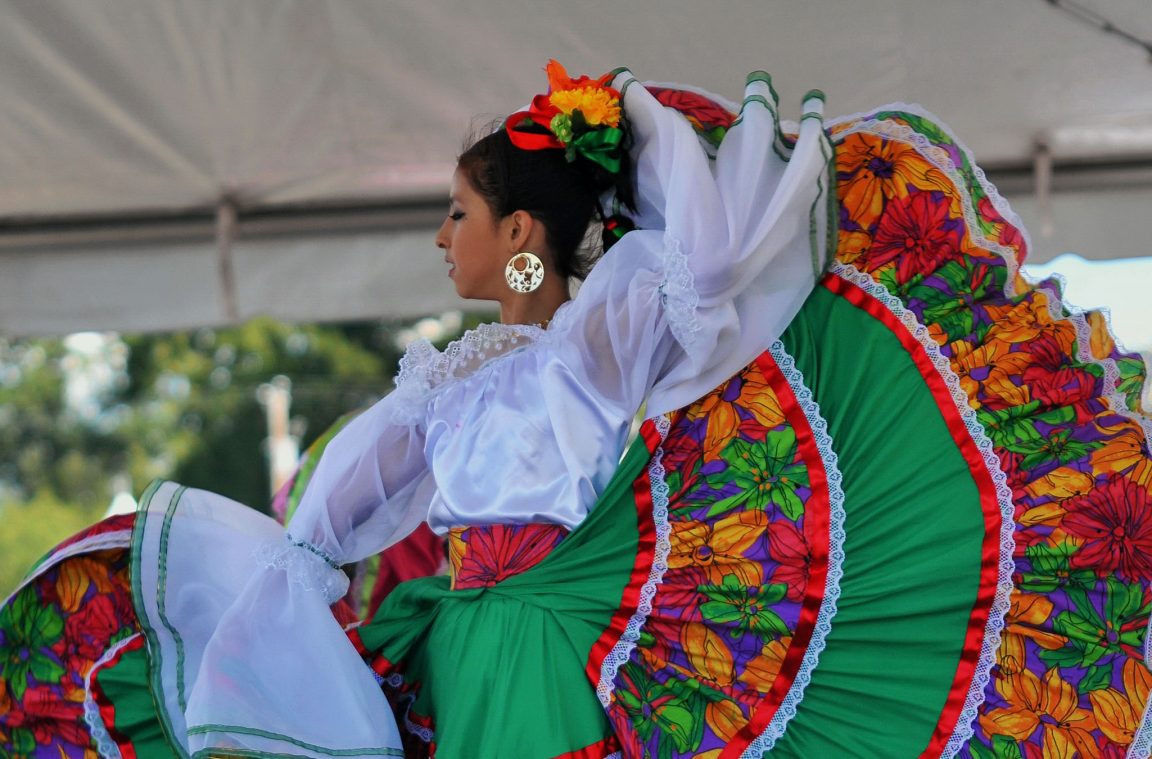 Within the culture of Mexico we find fascinating dances that have years of history. While some are very lively paced, others are slower. Likewise, different influences can be observed in them, although some are indigenous. In this article, we tell you the name and we talk about the most important ones. In addition, we show you images and videos.

The syrup from Guadalajara is the National Dance from Mexico. It originated in the XNUMXth century in Jalisco and mixes several regional dances. The word tapatío refers to the zapateado that men carry out.

When it comes to dancing, the man surrounds the woman to woo her. She stomps and flutters her skirt. Both wear typical costumes of the country: the man wears a charro suit and the woman the Chinese poblana dress.

If you want to know more about the typical clothing of the country, we recommend that you visit this article: Typical costumes of Mexico by regions.

This regional dance is so typical that it is even danced during the quinceañera party, in which a young woman celebrates that she has turned 15 and has therefore passed into adulthood.

This folk dance is quite surprising for people who do not know it, since its dancers are disguised as old people. It is represented in Michoacán and was born in the town of Jarácuaro.

In the beginning, this dance, dating from the time prehispanic, was carried out within the ritual in honor of the old god or god of fire. The costume they wear consists of a wooden mask, cane, wooden-soled shoes, pants, a white shirt, and a serape o hunchback.

El serape o hunchback It is a garment for men typical of Mexico traditionally used to protect themselves from the cold and rain. It is similar to a poncho and is usually quite colorful.

The protagonists are four men who imitate old people through falls and their way of walking. These are led by a couple known as Veripiti y Maringuía. In addition, the ugly ones, who make fun of the dance of the four old men. In Michoacán, children are taught from when they are young. 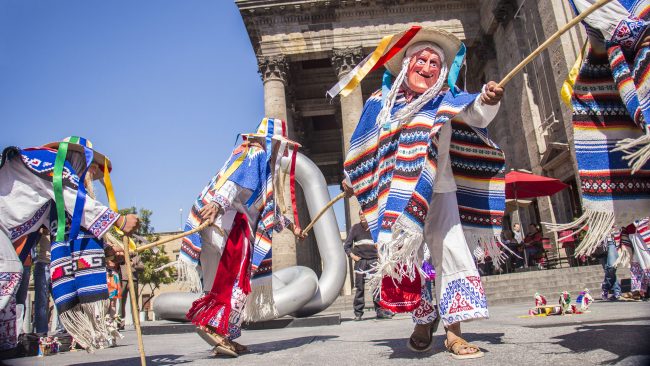 The huapango is practiced in different states among which are Hidalgo, Puebla, San Luis Potosí and Veracruz. Therefore, in each territory we find different variants, although they have certain characteristics in common.

This Mexican dance is usually danced on a wooden platform. Usually, the man wears white pants and a hat, and the woman, a fairly wide white skirt. The music is played by three people, who play the violin and the revelry and huapanguera (two types of guitar).

The bamba is one of the mestizo dances most representative of the state of Veracruz. In it, the Seguidillas and fandangos from Spain are mixed with the zapateados and guajiras from Cuba.

This dance is represented by a single couple and the predominant color in both people is white. Between the two, they form a bond with the movement of their steps, as we can see in this video:

The Yucatecan jarana is typical of the Yucatan peninsula. One of the most striking aspects is that the dancers carry objects on their heads while they perform the dance.

This style began between the seventeenth and eighteenth centuries, when it was danced by the Spaniards who were in this territory. With the passage of time, the Mexicans adapted it to their own style. They dance in pairs and are dressed in white.

This pre-Hispanic dance is practiced in the state of Sonora. In it there are three characters: the deer (animal venerated by the natives), the graze and the coyote. The dance represents deer hunting, so the person playing this role has to be quite agile.

The instruments that interpret the music of the deer dance are percussion, in addition to the reed flute.

Los concheros developed after the arrival of settlers to the territory, so, although it is an indigenous dance, it incorporates Spanish elements such as some religious themes.

This dance has two forms. One is called wakefulness and honors femininity, the night, mother earth and the jaguar. The other worships masculinity, the day, solar energy and the eagle. One of the elements that make up the wardrobe is the feathers.

This popular dance is mestizo, since its origin is German. The natives observed the upper classes of the colonists dancing it, so they ended up adapting it to their own style.

It is practiced mainly in the northern states, among which we find Baja California, Coahuilla, Chihuahua, Nuevo León, Sonora and Tamaulipas.

The pineapple flower is a dance that was born in San Juan Bautista Tuxtepec, Oaxaca. It is quite recent, from the 1958th century. In XNUMX, Governor Alfonso Pérez Gasga ordered that an indigenous choreography be designed for the musical piece with this name, by the author Samuel Mondragón.

The person in charge was Paulina Solís. Since then, this dance has been performed only by women, who wear a huipil or sleeveless shirt in bright colors, and two long braids with colored strips. In addition, they carry a pineapple on their shoulders. 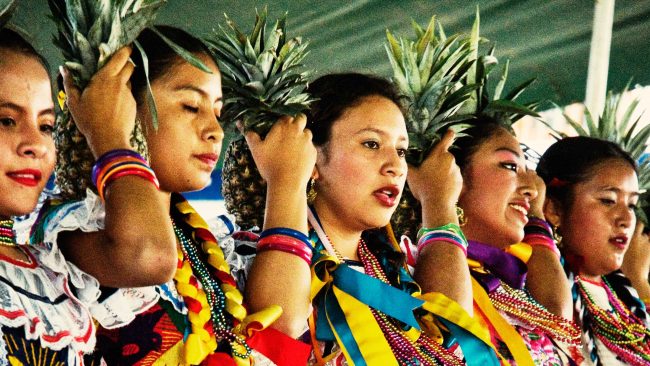 The Curious Dance of the Pineapple Flower, Mexico - by Matt Borden

The raspa is a representative dance of eastern Mexico that has its origin in Veracruz. It is a mestizo dance, as it mixes indigenous elements with forms of the colonists. Due to its easy structure it is often taught to children at school.

Quebradita is also known as little horse. It is enough Modern, since it began in the 1960s by the Banda El Recodo and began to become popular from the 90s thanks to radio and television.

In his music we hear the rhythm of a variant of the Mexican cumbia. It is a fusion of two different musical styles: techno and folklore. In it, the man embraces the woman by the waist and puts his right leg between the two legs of the girl. The couple turns and makes little jumps or breaks.

One of the movements that is practiced is the falls, in which the man makes the woman lean back with her back straight. The most striking modality is acrobatic. 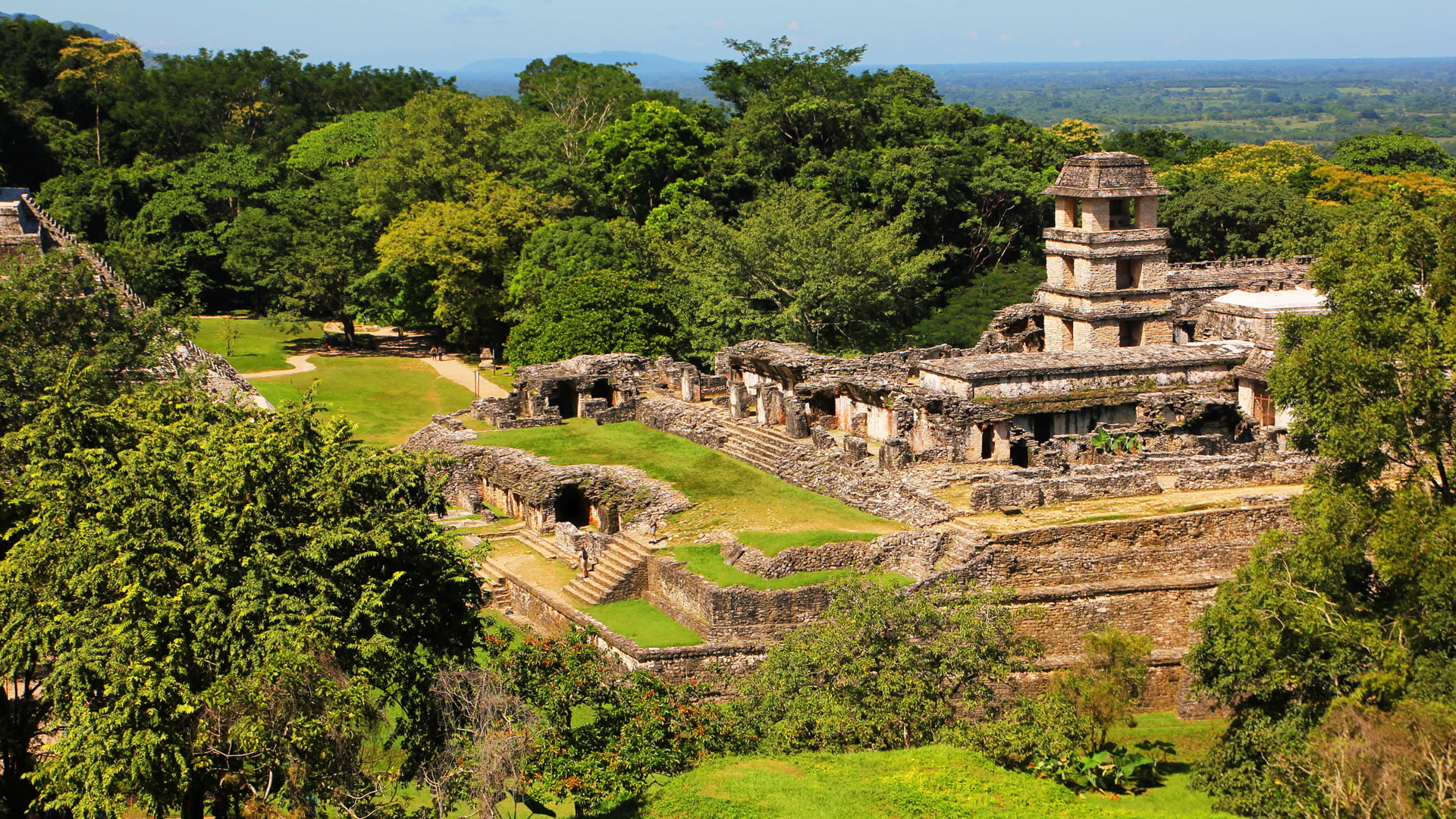