German gastronomy is made up of different dishes in which meat is usually abundant. In this article, we will talk about the typical dishes of current German cuisine, as well as the recipes that the descendants of the Volga Germans in America make.

El Bretzel, sometimes written as brezel o pretzel, It is a kind of bun or baked bread that has a bow shape and a somewhat salty taste. This food has centuries of history, as it was made by the Celts to celebrate the beginning of spring.

Its shape represents the horns of the ram, alleging Aries, because at that time of the year the sun passes through that constellation. However, today it is eaten throughout the year and on any occasion.

The basic ingredients to prepare them are flour, yeast, milk, butter, water, baking soda and salt. However, they can also be found in other types, such as cinnamon.

The bretzel: the most popular bread roll in Germany

Although the gulash o Goulash is a dish originally from Hungary, in Germany it is also quite elaborate. It is a kind of stew made up of: Goulash: one of the most complete dishes in Germany

Its flavor is quite powerful and it is a consistent dish, ideal for the cold of winter. It can be made broth or drier, depending on the taste of the diners.

Sauerkraut is a staple of German cuisine, serving as a escort of main meat dishes such as knuckle or ribs. It consists of cabbage or sauerkraut in salted water.

This food is probiotic, as it contains beneficial bacteria for our body. Therefore, it helps the digestive system and, in addition, provides calcium, magnesium, iron and phosphorus. It can be taken hot or cold. Sauerkraut: a typical accompaniment in Germany

El Strudel It is a typical dessert in the form of a cake that can be of different types, although the most popular is apple, called Apfelstrudel, which cannot be missed at Christmas. This is prepared with the following ingredients: 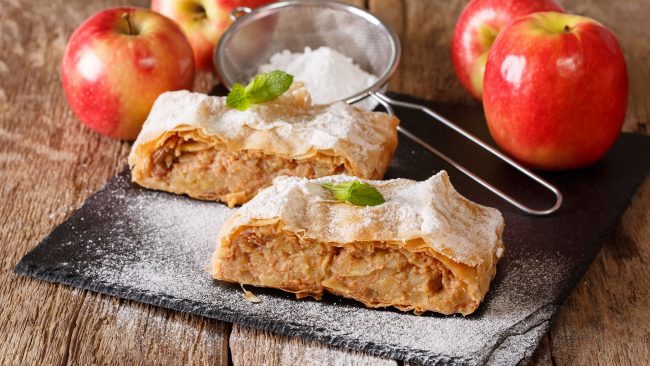 The Apfelstrudel: the most delicious sweet in Germany

The Spaetzle They are typical of southern Germany and can be served as a side or as a single dish. They are kind of pasta It can have various shapes, the most common being round and elongated. It is prepared with flour, egg, salt and sugar. The Spätzle: a type of pasta consumed in Germany

These minced meat sausages are one of the most popular foods in Germany, as they can be eaten anywhere and are fast food, perfect for any occasion. The meat used is usually pork. Depending on the area, we find different types. Bratwurst: one of the most consumed foods in Germany

The typical accompaniment is sauerkraut or potato salad. In the street stalls it is served inside a bread and accompanied by some sauces such as ketchup or mustard.

El Schnitzel Holstein It consists of beef breaded in flour and fried in butter. It is accompanied by a fried egg, fried fish and white bread, although it can also be served with beans and roasted potatoes.

The history of this typical German dish is quite curious. Friedrich von Holstein, a XNUMXth century mayor of Berlin, always asked in a restaurant to be served quickly. So they decided to serve the first and second courses together. Since then, it is a traditional elaboration of Berlin and surroundings. The knuckle is a part of the pig, specifically the joint area between the two parts of the leg. In Germany it is known as hashish. Its preparation is quite long.

In each area of ​​Germany it can be tested in different ways. While in Berlin it is typical to serve it with pea puree, in the south of the country it is usually cooked in the oven. The most popular accompaniment is sauerkraut. Beer is the most popular drink in Germany. It is part of their culture, since for thousands of years it has already been consumed in this territory. It can be drunk both to accompany food and alone.

Generally, it is served in half-liter glasses, although there are also one-liter glasses, and it is usually draft beer. Has her own party, the. Oktoberfest, which has been held in Munich since 1810. If you want to know more about this tradition and others of German culture, we recommend this article: Traditions in Germany. Beer: the favorite drink of the Germans

The Knödel They are dumplings that serve both as a side and as a main dish. The ingredients vary a lot, although the main ones are: Knödel: a food made from bread

If you want to know how to make them and what different types exist, you can find out in this article: The typical Knödel from Germany.

El Kassler o Kassel It is a pork fillet that is made salted and slightly smoked. Its origin is in Berlin, in the XIX century. It can be accompanied by sauerkraut and mashed potatoes. The characteristics of the typical German Kassler

It is known as Volga Germans those German immigrants who were living in the Volga area, in Russia, and that in the XNUMXth century they moved to some countries in America. They developed their own gastronomy with clear references to German cuisine. Some of its traditional dishes are:

The Vickel klees o Wickel Nude are dough rolls composed of these ingredients: First of all, a dough is made with the flour, the egg, the salt, the milk and a little yeast. Let it rest for 15 minutes and then stretch it to make it smooth.

Flour is sprinkled on top and oil is added, rolled up and cut into small pieces. These are put on top of a stew and simmered for 20 minutes

This recipe is quite easy, so it can be prepared with the help of children. First, to prepare this dish, a dough is made of flour, salt, egg and water.

On the other hand, potatoes are cooked and after a while spoonfuls of dough are added, covered and left to cook. Once finished, fried bread is added.

El pirok It is a kind of dough stuffed with cabbage, minced meat, onion and chili or ground chilli. Its preparation is quite long, since the filling has to be prepared the day before so that it ferments correctly. The elaboration of pirok in Argentina

This recipe is popular especially in Argentina. So much so, that some towns celebrate the Pirok Festival, in which this dish that mixes Latin American and German culture is the protagonist.

This article has been shared 125 times. We have spent many hours collecting this information. If you liked it, share it, please: Share 125
We use our own and third-party cookies that offer us statistical data and your browsing habits; with this we improve our content, we can even show advertising related to your preferences. If you want to disable these cookies, press the Configure button. To keep all these cookies active, press the Accept button. More information in the Cookies Policy of our website.
Setting
Accept and Continue
Manage consents