The routes of the Camino de Santiago

The Camino de Santiago is a set of pilgrimage routes that go to Santiago de Compostela. It began to be traversed in the Middle Ages, when the tomb of the Apostle Santiago was discovered in the city.

Today, people from multiple countries decide to travel one of these routes, either on foot, by bicycle or even on horseback. In this article, we inform you about the most important routes and show you various images and maps.

The routes of the Camino de Santiago

The French Way is the most popular option and therefore the busiest. Has a total of 31 stages and it can be started from two different French towns: Saint-Jean-Pied-de-Port or Somport.

These alternatives differ in the first six stages, whose stops are the following:

The route that goes from Somport to Puente la Reina, which is 165 km long, is known as Aragonese Road.

From stage 7 it is the same road, which begins in Torres del Río. On this map you can see the complete route starting from Saint-Jean-Pied-de-Port: 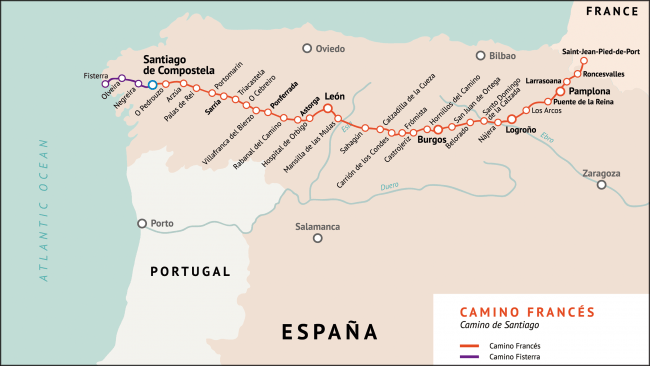 If you have little time or are a beginner, you can do the last 100 km of the route. Thus, it begins in Sarria (Lugo) and is completed in five stages:

The Vía de la Plata begins in southern Spain, specifically in SevillaAlthough some people start it in Mérida, since it is the longest option. This stands out because it runs along the path of an ancient Roman road that leads to Astorga, which is located 705 km from Sevilla.

Once you reach Astorga, to finish the Camino de Santiago, continue along the French Way. However, some people prefer to follow the Roman road to Granja de Moreruela, where you can take the option known as Sanabrés Way. 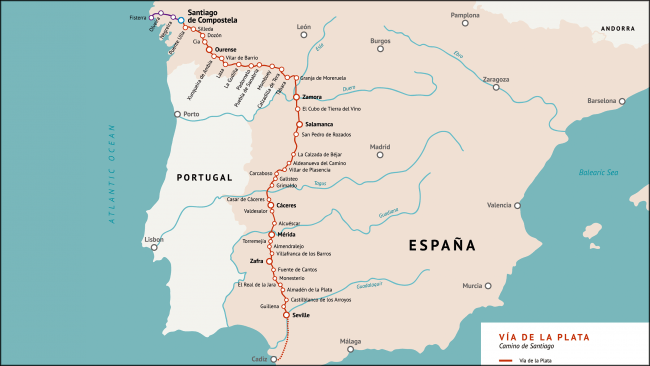 The Sanabrés Way starts from Granja de Moreruela (Zamora) and has 13 stages. In total, around 370 km are covered. This route is also known as Mozarabic Way o Southern Galician Way.

For some people, the Camino Sanabrés is the continuation of the Vía de la Plata, which begins in Seville and which we have already talked about previously. In this video you can see what the first stage of the sanabresa route is like:

The Northern Way is one of the more beautiful due to the impressive landscapes that can be seen from the Cantabrian coast. It departs from Irún, in the Basque Country, and has 32 stages. However, it ends in Arzúa, A Coruña.

To get to Santiago de Compostela you have to continue along the French Way, so you have to add 2 more stages. This route passes through large cities such as San Sebastián, Bilbao, Santander and Oviedo. 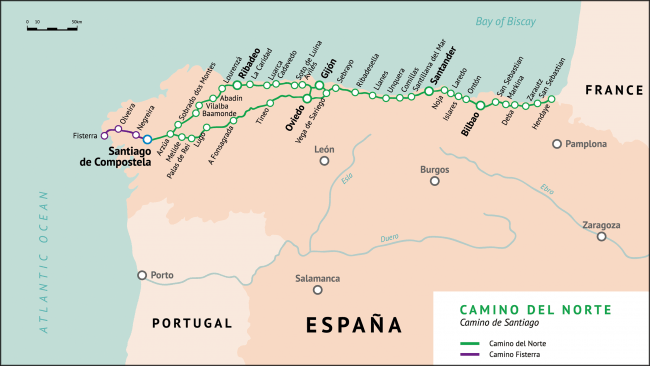 With the Portuguese Way you travel the west of the Iberian Peninsula. There are multiple options. If you decide to start in Lisbon, there is a distance of 600 km, while if we start in Porto, you walk 240 km.

However, the most prominent route is the one that begins in Tui and it has only a distance of 107 km. This option has 2 stages and the towns through which they pass are Tui, O Porriño, Redondela, Pontevedra, Caldas de Reis, Padrón and Santiago de Compostela. 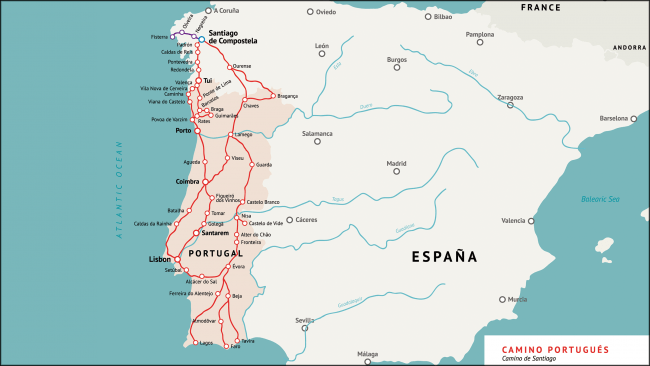 The Primitive Way is supposedly the first route which was made to visit the tomb of the Apostle Santiago. This tour was carried out by King Alfonso II the Chaste in the XNUMXth century, shortly after the tomb of the apostle was discovered.

It is a shorter alternative than most, as it only has 13 stages, so it can be a good choice if you are traveling with children. These are its stages: 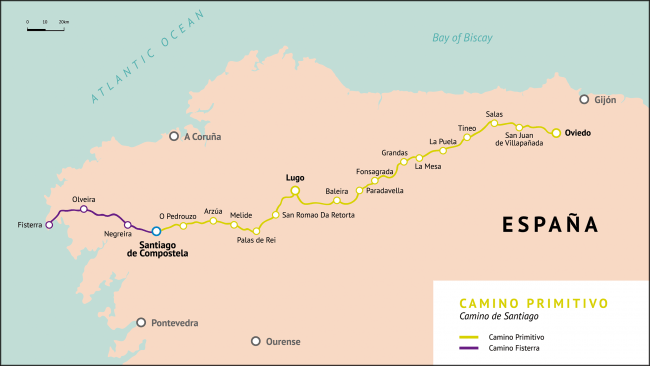 El Camino Inglés is called that way because they used to come by sea pilgrims from the UK and other countries like Norway and Denmark. These arrived in Ferrol or A Coruña, from where they left for Santiago de Compostela. To this day, these two alternatives remain. 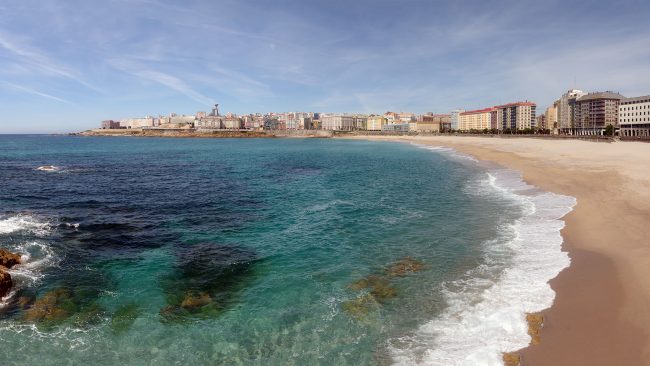 A Coruña: the beginning of the English Way

From A Coruña it is 74 km and has 3 stages, while from Ferrol there are 118 km and we find 6 stages. Both options come together at Hospital de Bruma. The stops that are made on the route from Ferrol are:

If you are looking for a route of around 200 km, you can choose to walk the Winter Way. History tells that it is an alternative that was used in winter to avoid the snowy mountains of O Cebreiro, whose access was quite difficult.

It starts in Las Médulas and has a total of 9 stages. From the second stage, which begins in O Barco de Valdeorras, the whole way passes through Galicia.

If after reaching Santiago de Compostela you still want to continue walking, then take this last route that reaches Fisterra (known in Spanish as Finisterre) and Muxía. 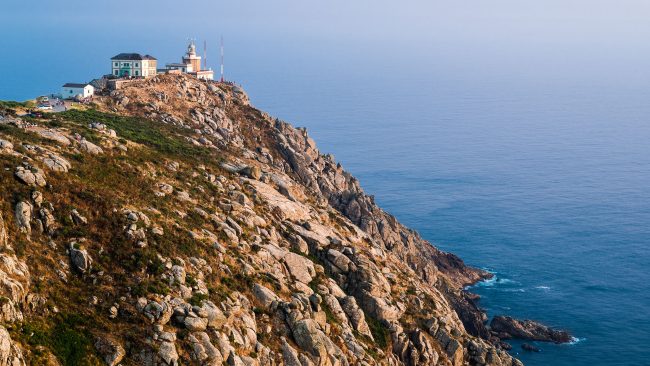 Cape Fisterra and the belief of the End of the World

From Santiago de Compostela to Fisterra you go 3 stages, about 90 km. Some people decide to continue and walk another 29 km from Fisterra to Muxía, or go just to Muxía without going through Fisterra, for which they have to take a different route in Olveiroa.

This article has been shared 89 times. We have spent many hours collecting this information. If you liked it, share it, please:

Share 89
We use our own and third-party cookies that offer us statistical data and your browsing habits; with this we improve our content, we can even show advertising related to your preferences. If you want to disable these cookies, press the Configure button. To keep all these cookies active, press the Accept button. More information in the Cookies policy of our website.
Setup
Accept and Continue
Manage consents