What are the typical dishes of the Amazon region of Peru? 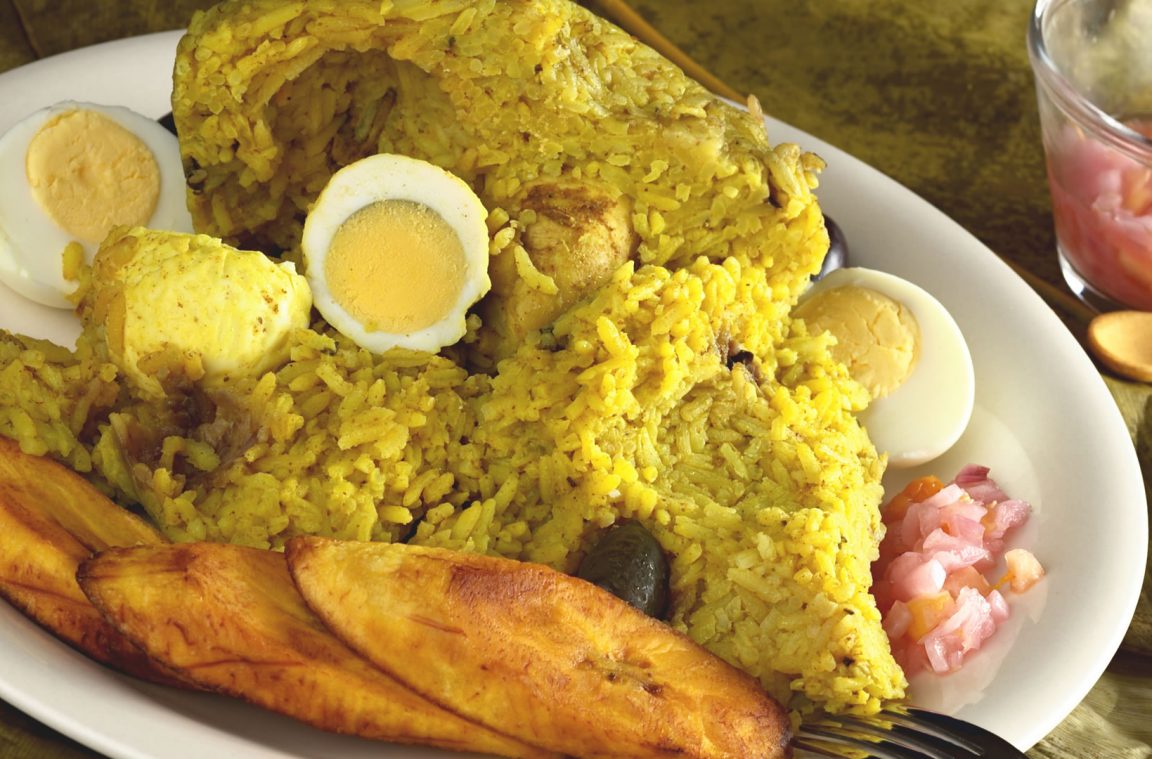 The typical dishes of the Peruvian Amazon region are classified among the best recipes in the world due to their great variety of ingredients, flavors and textures, which are the result of the influence of all the cultures that have been arriving in the country.

What are the typical dishes of the Amazon region of Peru?

It consists of a stew whose base ingredient is beans, both white and black, which are seasoned with mote and coriander. Some recipes also add corn or even pine nuts, although these ingredients are optional. 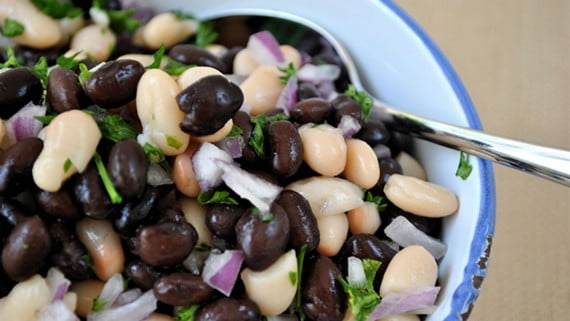 The minced meat roll is another of the star dishes of the Peruvian Amazon and is similar to the empanadillas popular among the spanish tapas.

For its preparation, you need minced meat (usually beef, although it can also be made with chicken meat), onion, eggs, breadcrumbs and spices to taste. 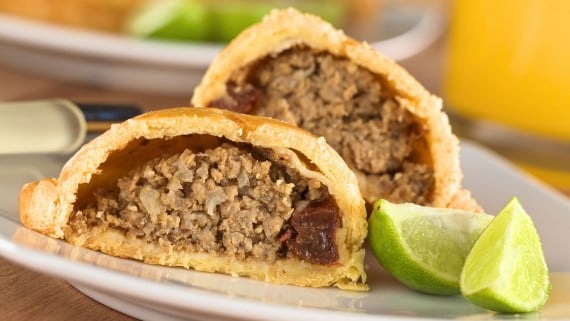 This dish is not only popular in the Peruvian Amazon, but in all the gastronomy of Peru, although the original recipe comes from the Amazon rainforest.

The word sloppy comes from the Quechua language and is originally written taka chu, whose literal meaning is I hit him. 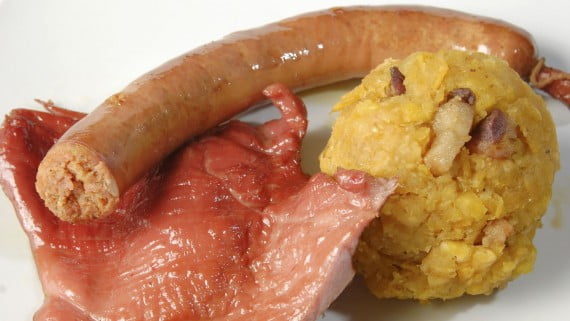 The tacacho consists of a mass obtained from mashing banana when it is still green and this is mixed with pork rinds, dissolved butter and spices to taste.

For its part, cecina is dried and smoked pork meat grilled and marinated with typical spices of the Peruvian jungle.

Humitas are also known as humintas (in singular humi, a term adapted from Quechua and originally written jumint'a).

It is about corn cob leaves, locally called chala o panca, stuffed with a pasta made with corn and seasoned with spices from the Peruvian jungle. 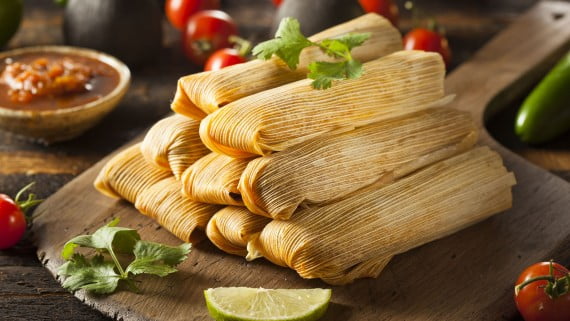 Its skin is rough and hard, so it is not edible. For this reason, the yuccas are peeled and then cooked, so that the pulp becomes soft. 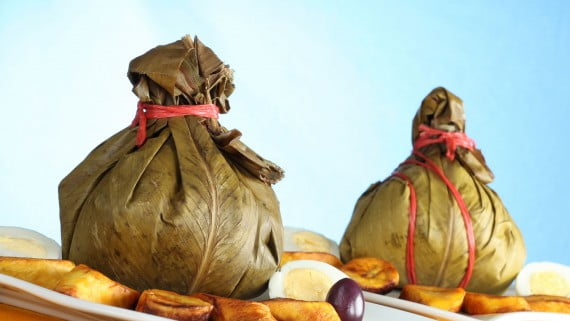 Depending on the variety, it can be whitish or yellowish in color. Cassava, when ready, is mixed with boiled rice, chicken meat, boiled eggs, olives and various spices. All this is wrapped in a bijao leaf, closed and boiled for about 90 min.

This kind of soup or stew is also very popular in Amazonian gastronomy. It is cooked with hen cut into prey, peeled peanuts (called peanut in the area), corn flour, garlic, sacha culantro (a variety of herbaceous plant common in the Amazon jungle), yucca and chopped onion. Its flavor can be classified as intense and the texture is thick. 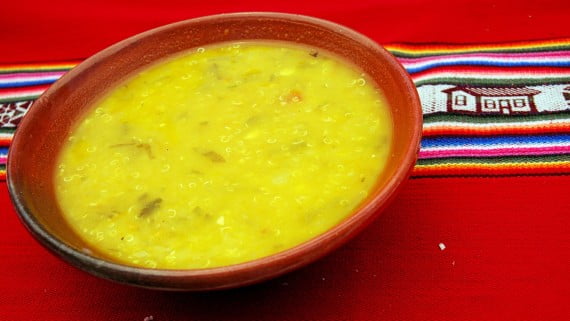 This dish consists of a stew or stew made from a variety of fish and mollusks, such as: hake or sea bass, squid, mussels, grouper, prawns, octopus ... All of them are mixed with boiled rice and vegetables (pepper, carrot, tomato, etc. .). 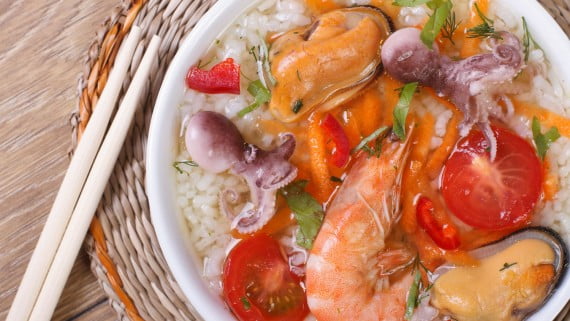 Like the fish casserole, this stew is prepared in a similar way, except that instead of fish, it has lamb meat. 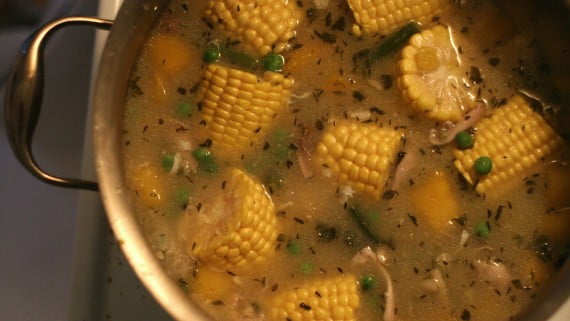 The guinea pig is a rodent typical of the Andean region of South America that can be found in Peru, Bolivia, Ecuador and Colombia. Guinea pig meat is rich in omega 3, low in fat and contains high levels of protein.

For this particular dish, the guinea pig is seasoned with salt, pepper, pisco and garlic the night before the day it is to be eaten. 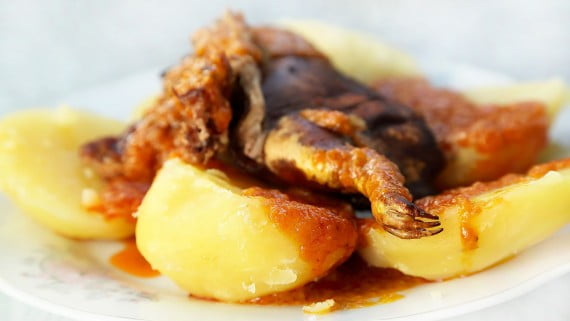 Afterwards, it is deep-fried until the skin is golden brown and the texture is crisp. It is usually served with potatoes, white rice, tomatoes, onion, lettuce leaves ...

The region of the Peruvian jungle where the most trout are raised is Huancayo. To fry the trout, they must be dipped in milk, coated in flour and, finally, fried in plenty of oil.

The result is that the trout is golden and crispy. They usually add a couple of lemon slices and a few fresh parsley leaves, chopped and scattered on top. 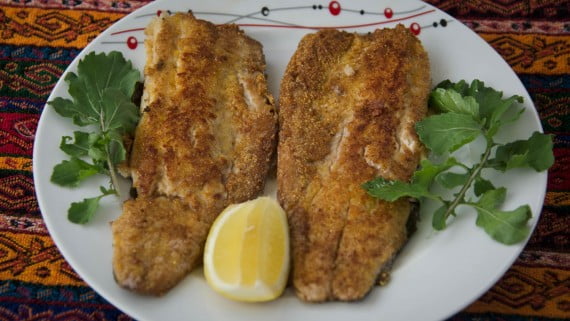 This dish is widely consumed in Ayacucho, Cusco and Puno. It stands out for being very rich in proteins, minerals and vitamins, as well as potassium, iron, phosphorus and other essential nutrients.

This sweet is actually popular throughout Latin America. They are small round-shaped cakes made of margarine, sugar, flour, cornstarch and egg yolks, from which the dough that will make up the alfajores is obtained.

For the filling, dulce de leche is usually used, but the filling of your choice can be used: pastry cream, chocolate, vanilla cream ... Some versions of this dessert include grated coconut. 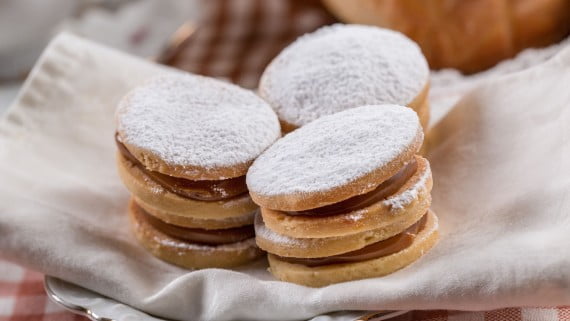 Cocadas are typical balls of Peru, as well as the rest of Latin America and Spain, where they are known as Coquitos. They are prepared with fried coconut grated and mixed with cinnamon and dissolved sugar. All this is mixed giving it a ball shape. 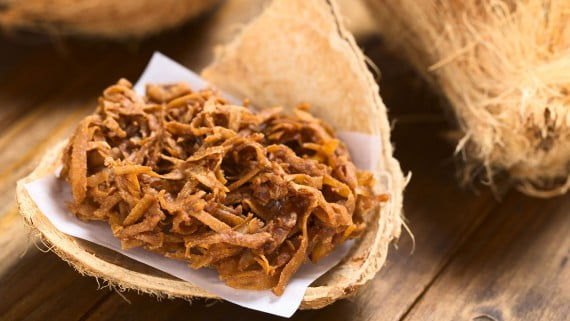 This dessert is typical of November 2 or Day of the Faithful in the Andean regions of Peru, Bolivia, Argentina, Ecuador, etc. and are also known by the name of bread dolls, bread wawas or even tantowawas.

It is a loaf of wheat bread that is molded in the shape of a child or baby and decorated with colored sugar and sometimes filled with pastry cream or some other sweet ingredient. The term wow means in Quechua little boy. 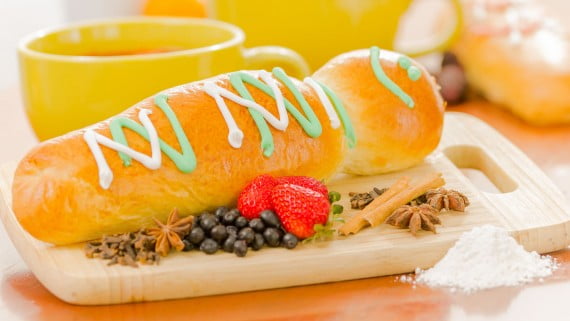 It is, in fact, a drink that is taken to accompany the bread guagas. It is prepared with corn flour, babaco (a fruit that grows in the Andean region), pineapple, blackberry, naranjilla and strawberry (known as Strawberry in Peru). It is common to dip the guagas in this drink. 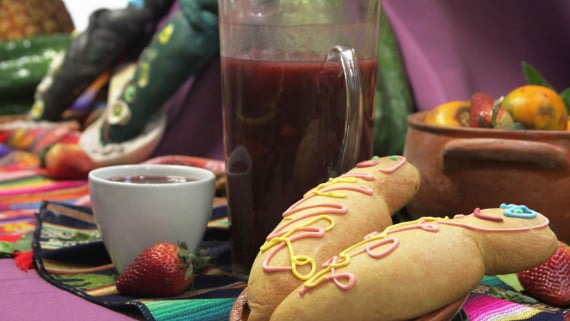 It consists of a homemade dessert with a texture similar to that of flan. It is also a very popular dessert in Chile. The base is prepared with condensed milk, cold milk, eggs and vanilla essence. Once the base is prepared, liquid caramel is added. 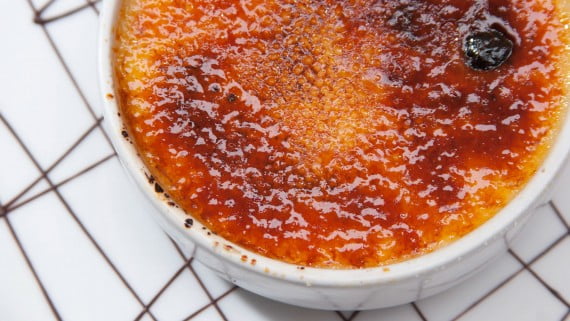 This dessert is made with purple corn, which is why it has a deep purple appearance. This fruit is grown in the Andes of Peru, as well as Argentina, Ecuador and Bolivia.

It is also used in Mexico. Actually, it is a dessert that is eaten in the month of October to commemorate the Lord of Miracles. 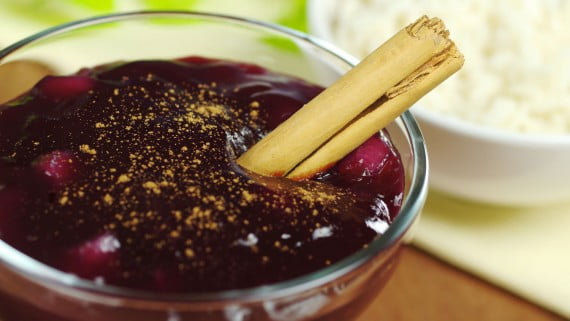 Drinks or drinks from the jungle 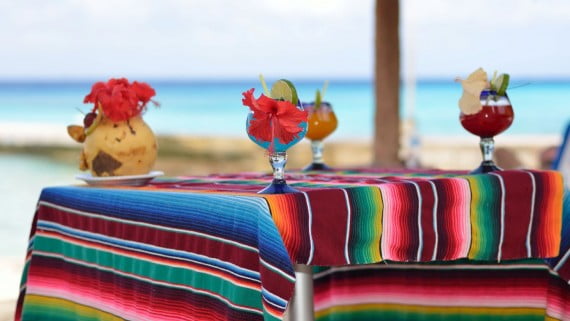 Drinks of the jungle - by atramos

Among the main ones we have the guarapo or huarapo, a drink based on the juice of the sugar cane after being boiled and fermented.

This is followed by the breaker calzón or RC, which is prepared with brandy and roots of jungle plants; In some areas, it is also known as break bed. Other similar liquors are: daddy burns, he just screams and the devil's breath. 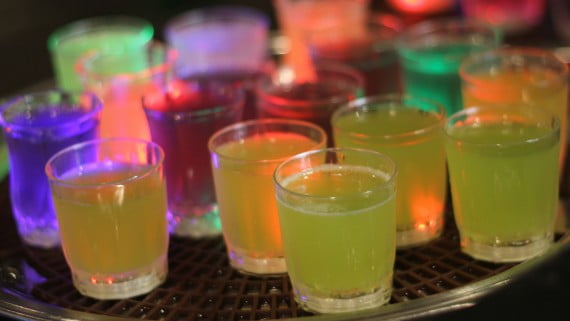 Typical macerates from the jungle - by GW Fins

He too milk liquor, which is prepared with whey and brandy, is very popular and, in addition, the production process is simpler than that of other jungle liquors.

It requires a short maceration period and the preparation does not involve too many steps to follow, since too many ingredients are not necessary (brandy, vanilla extract, lemon, sugar, milk, glycerin and ethyl alcohol). 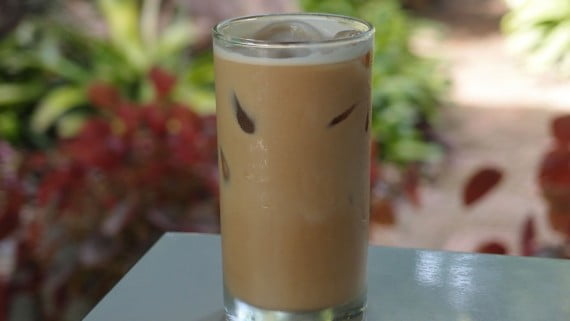 Finally, the underwhelmed, which owes its deep purple color to the fact that it is prepared with black grapes that grow in the Peruvian jungle.

In many cases, the grapes are left whole floating in the liquor and can be accompanied by a slice of lime to give it a certain acid touch. 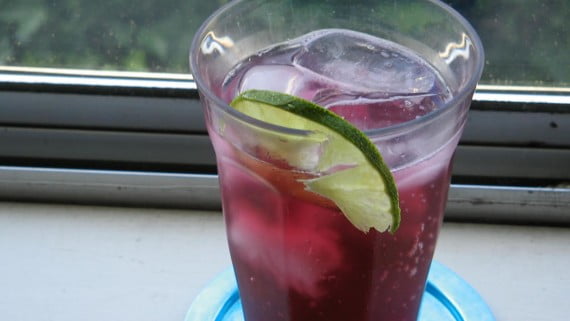 Another drink in which brandy cannot be absent as a basic ingredient is chuchuhuasi, which is made from the root of the plant of the same name that grows in the Condorcanqui area.

The liquor pur pur It owes its striking name to it is made with seeds of the fruit of the pur pur, as well as syrup and brandy.

This article has been shared 643 times. We have spent many hours collecting this information. If you liked it, share it, please: 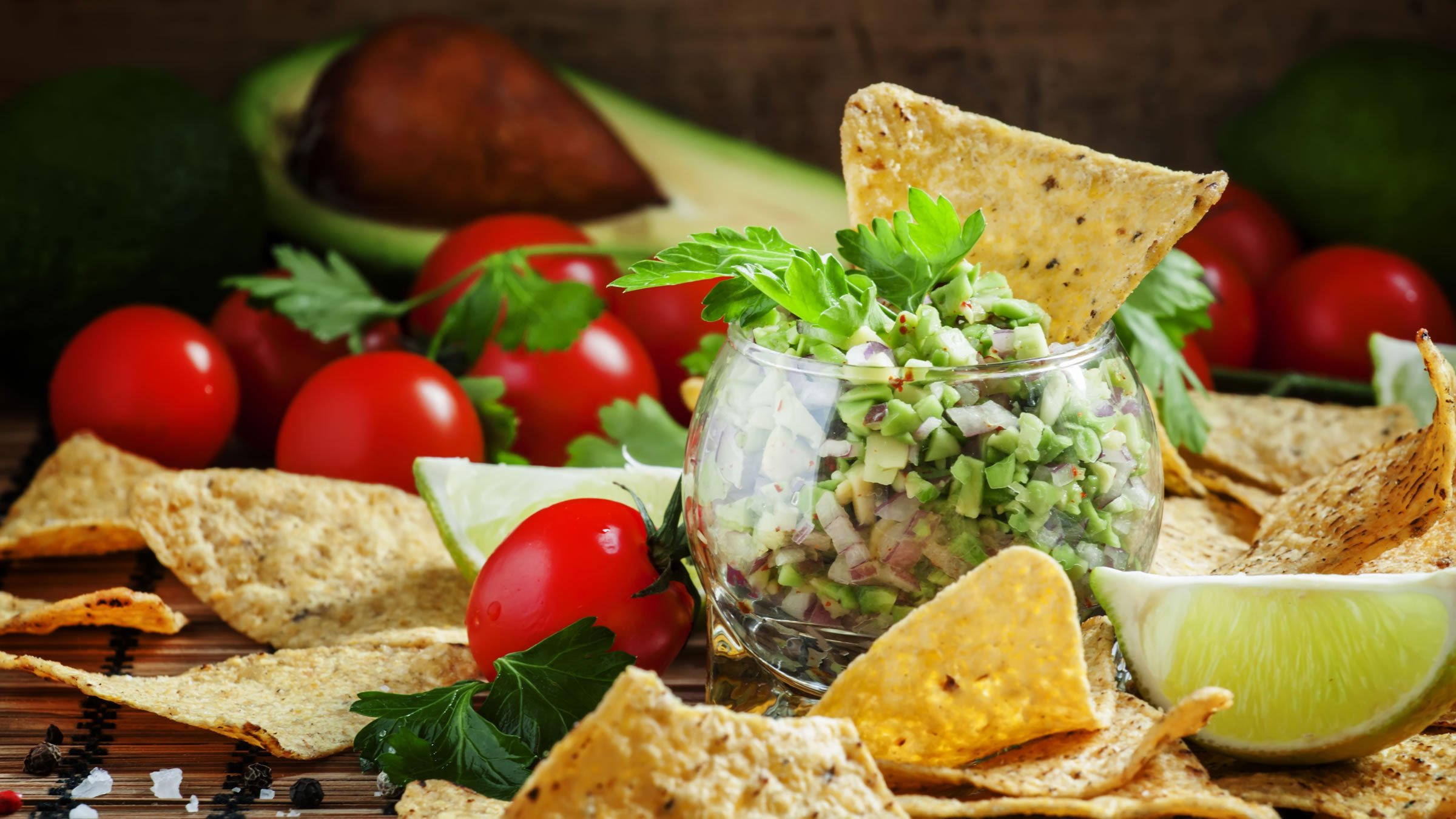 Share 643
We use our own and third-party cookies that offer us statistical data and your browsing habits; with this we improve our content, we can even show advertising related to your preferences. If you want to disable these cookies, press the Configure button. To keep all these cookies active, press the Accept button. More information in the Cookies Policy of our website.
Setting
Accept and Continue
Manage consents